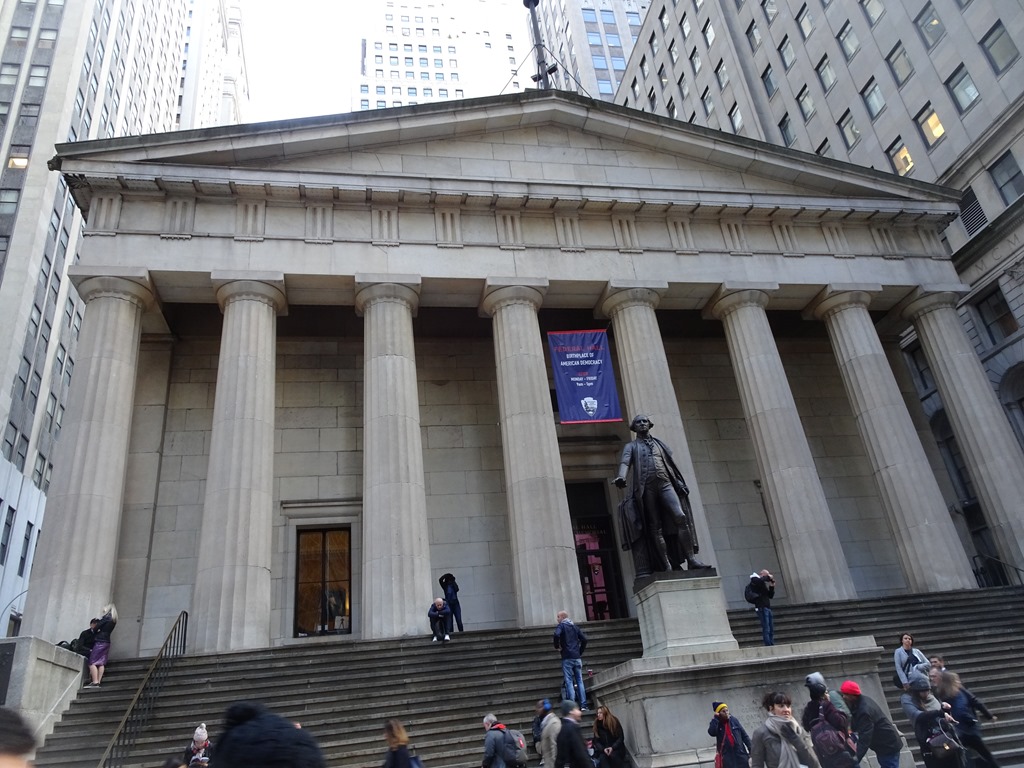 No matter how many times we visit New York City, we always enjoy taking walking tours. We recently walked through downtown New York City on a  Free Tours By Foot. The area is steeped in history and is a fun area to explore. We explored four primary neighborhoods: the Financial District, Chinatown, Little Italy and SoHo.

This fascinating tour began at Federal Hall, the successor building to the British Colonial town hall at which George Washington took his first oath of office and in which he and the new country’s Congress served for the first two years of the republic. The bible he used is displayed there. With the New York Stock Exchange across the street, our guide explained how the country’s first stock exchange was not in a building, but in the middle of Wall Street itself. 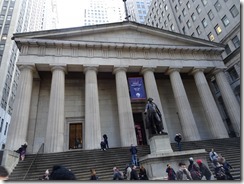 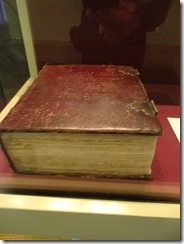 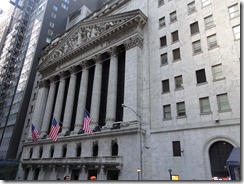 The tour then moved up the street to Trinity Church. Thanks to a  royal colonial grant of a large tract of then vacant land, the church was the largest an wealthiest landowner in the city—a wealth that belies the modest brownstone structure which has been rebuilt after a fire and then a collapsed roof. The church’s cemetery contains Alexander Hamilton’s grave. 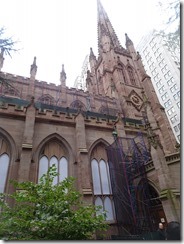 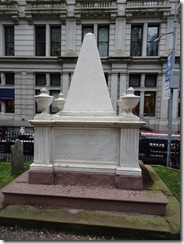 We then stopped at the World Trade Center area where new buildings are going up, and spent a few minutes reflecting around one of the memorial pools. 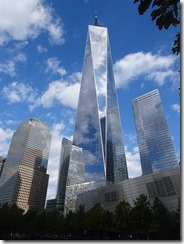 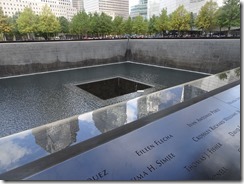 Then we went into the striking Occulus transportation hub (shaped like “the wings of a dove”) and the engaging public art that graces a corrugated structure which may or may not turn out to be permanent. 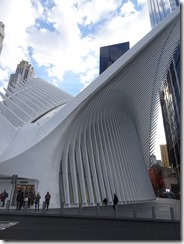 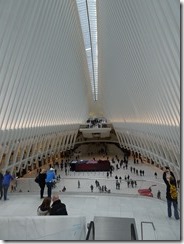 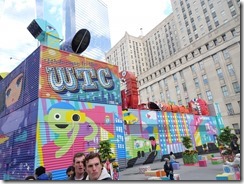 After passing St. Paul’s Chapel (the center of much of the WTC recovery effort), we made a brief stop at City Hall and the Woolworth Building which, was the tallest building in the world when built in 1913. Since nobody would finance a building that most felt was too tall to be built or to remain standing, the company’s owner paid the $13 million tab for the building out of his own pocket. This sum, by the way, is now only about one-tenth the recent price (albeit in another century’s dollars) of the penthouse of the luxury condo complex into which the building has been converted. 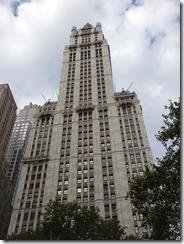 We then walked to Chinatown which originally was German, then Irish, then Italian and now is home to the Chinese community. The first Chinese migrants worked on the Transcontinental Railway. Immigration restrictions resulted in a 200:1 male/female ratio and the resultant dearth of children. The area is now only one of seven (and not even the largest) of the cities’ Chinese enclaves. 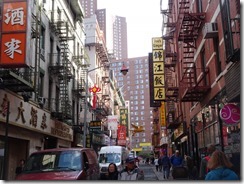 On the way to Mott Street, the neighborhood’s current commercial and restaurant hub, we learned how most of the city’s apartments came from the subdivision of larger, single-family dwellings and saw the first purpose-built apartment building (buildings which was originally called “tenements” without regard to the current negative connotations of the word). 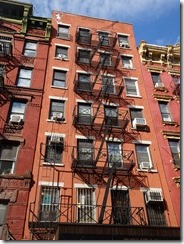 The extraordinarily cramped living conditions were deplorable and dangerous:

The walk from Downtown to Chinatown took us through the section of the city that used to be the heart of the notorious Five Points neighborhood. Ironically, this area used to be a relatively wealthy “suburb” when the northern border of the city was at Wall Street, and even after it had moved up to City Hall Plaza in 1809. As the city expanded, however, the wealthy then moved to the more distant area that is now SOHO (see below). It then became the city of the dirt poor, extraordinarily violent section of the Irish ghetto of Five Points, named, quite logically, for its five-street intersection.

Martin Scorsese’ film “Gangs of New York” commemorated this formerly Irish enclave. The populous and politicians largely ignored the area, believing that people either lived in the areaby choice or as appropriate “punishment” for their depraved lifestyles.  In the late 1890s, photo-journalist Jacob Riis helped to expose the horrid conditions in which local children lived and slum clearance began. It is now home to a large Chinatown park.

Little Italy was once a 55 square-block neighborhood. It now consists of only a couple blocks, primarily on Mulberry Street. 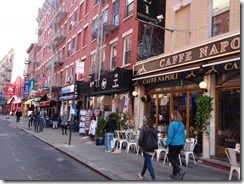 Our tour included a lengthy discussion of:

Where were the factories in which most of this cheap labor worked? Many ended up in the unlikely area now known as SOHO. As an exclusive suburb that attracted well-to-do residents, the area attracted the headquarters and original stores of luxury brands and up-scale department stores including Lord & Taylor and Haughwout’s. The latter, in fact, intent on attracting new customers, became the first building to install Otis’s brand new safety elevator (whose car could not fall even if the cable broke) in 1857. While the elevator was indeed safe, customers would not trust it and continued to take the stairs. It took another five years, and the creation of the first high-rises for people to begin using these contraptions.

So where did the factories come from? From the city’s further expansion. As the city’s boundaries moved north, the wealthy moved even further north, to what is now Midtown. By the 1860s, SOHO evolved into the city’s primary Red Light District.

The resultant low-prices, combined with the availability of cheap Irish and Italian labor from the south and the now-vacant, large, open-floor department stores attracted textile companies who needed large spaces to accommodate hundreds of tables at which men, and increasingly women would sew garments on a piece-work basis. Workers often had to buy their own equipment (even thread) and were paid only for what they produced. Inexpensive, new construction techniques, combined with lax safety standards and even more lax enforcement, attracted hundreds of other such factories. By 1900, SOHO was home to 230 of the city’s 400 clothing factories.

By 1911, new labor laws and stricter safety standards prompted most of these factories to gradually began to close and move to southern states. The now vacant huge buildings attracted vagrants and vermin. the city decided to tear most of them down and build a new highway in their place. But before the plans were approved and demolition could begin, hundreds of artists saw great potential in the now, cheap (and often free) space and its large, open buildings. By the 1950s,  they had established galleries on ground floors of the buildings and converted upper floors into large, lofts in which they lived and used as studios. The city saw this as an opportunity for avoiding the expense of demolition and encouraged the artists.

By the late 1970s and 1980s, SOHO had become hip. Gentrification began to take hold and prices began shooting up. Upscale residents, restaurants, boutiques and high-end art galleries began to move in. Artists were increasingly priced out of this hot neighborhood and began looking for the next neighborhood. Many landed in Chelsea, which is now undergoing a similar transformation and is now home to dozens of galleries who sell works beginning at $10,000 and reach well into the six figures.

As if the gentrification of artist galleries and lofts weren’t enough, even the city’s police headquarters, which was once located in the neighborhood, has been gentrified. This building, in fact, has its own fascinating history. Back in the mid-1800s, policing was often a voluntary job. Men with clubs, guns and sometimes, with a masochistic streak, took over policing for their neighborhoods. Enforcement could be arbitrary, and sometimes brutal. By the 1880s, Theodore Roosevelt, at the beginning of his political career, was appointed Police Commissioner. He was given the mandate and the resources to create a professional police force. He constructed a large, at that time, lovely building to upgrade the image of a department in which officers would be recruited, offered competitive pay, undergo rigorous training and held to strict standards. Today, surprise, surprise, it’s a luxury condo building. 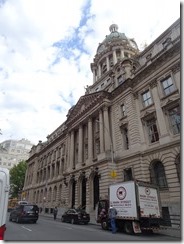