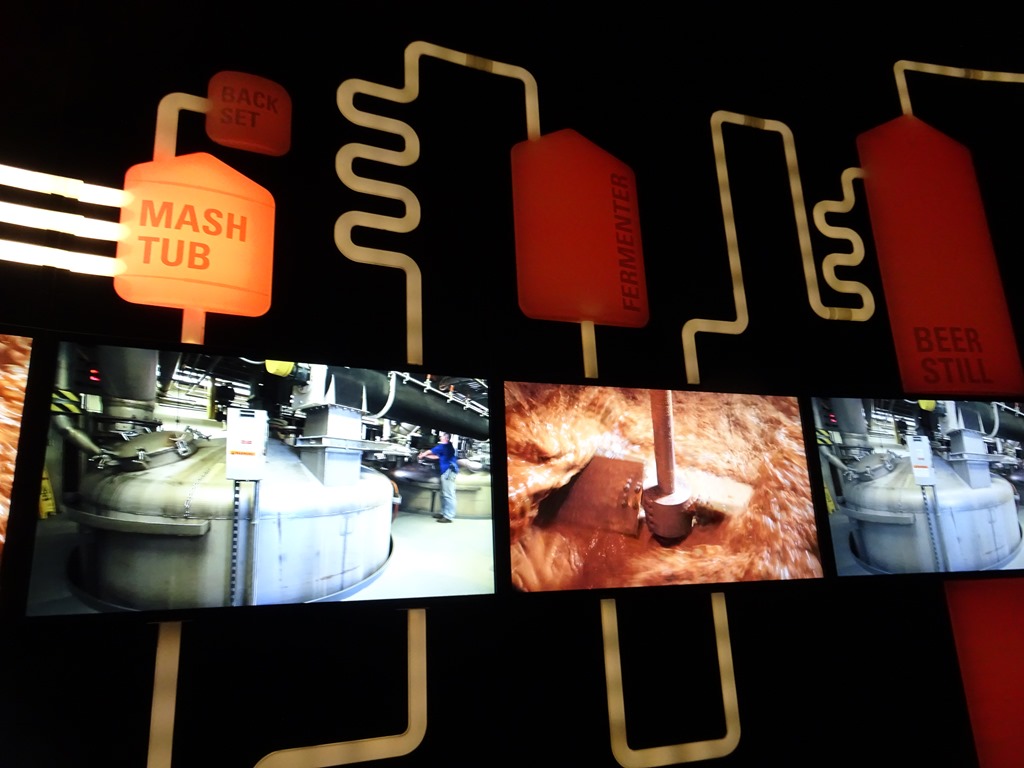 For us, the main reason to go to Louisville Kentucky was to go to the  Kentucky Derby. But if you happen to find yourself in Louisville for the Derby or for any other reason, the city has a number of other things to see and do.

The first thing to understand, however, is that while Louisville is not an especially large city (about 250,000 population), the particularly interesting sections are generally about two to three miles away from each other which meant that we will continually criss-crossing the city. Of most interest to us were:

The Derby, and Derby Museum is in our Kentucky Derby blog. The two Restaurant Row restaurants at which we ate are covered in our upcoming Louisville Restaurant post. Let’s explore each of these other areas.

We spent some time in downtown Louisville primarily in the roughly 10-block stretch (from 1st to 10th Streets) along Main and Market Streets. This section has many of the city’s primary attractions. Among those we visited were:

Among the most interesting were:

Evan Williams Bourbon Experience. The multimedia tour began with a brief film portraying the history of the founding of Louisville, where in 1783, Evan Williams opened his distillery (which produced and sold unaged 160 proof whiskey), emerged as one of the city leaders and was named wharf master to control and collect fees for the rapidly growing river port. The tour briefly explains the steps in the distilling process and how in 1810, barrel aging (in charred barrels) was introduced to age and caramelize the sugars and create what is now Bourbon. It explained how bad batches were sold to “rectifiers” who would add flavoring and poisonous chemicals to create what appropriately became known as “rut-gut” (and how this helped lead to the creation of the FDA), and how in 1897, the federal government began “bonding” alcohol to ensure that appropriate taxes were paid. An interesting tour that ended in one of two tasting rooms furnished as upscale 18th-century barrooms. There, we tasted three different bourbons: the 5-7 year-old Black Label, the 8-10 year-old Single Barrel, And the super-premium 12+-year, Red Label. 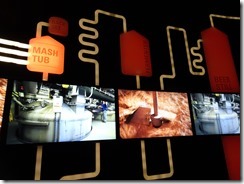 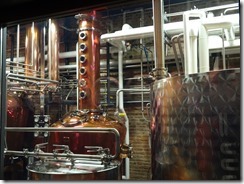 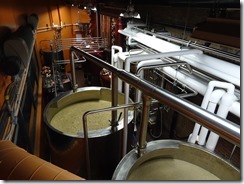 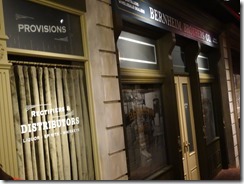 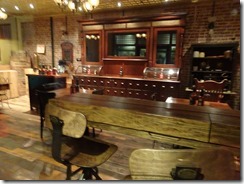 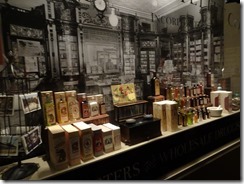 Muhammed Ali Center. The journey through this large, exceptionally well-done museum begins with a movie that provides an overview of Muhammed Ali’s life, beliefs, efforts to ameliorate discrimination, illiteracy and poverty, and his life of charity. The museum takes you through not just his extraordinary success as a boxer, his work for equality and his charity, but also the many controversies surrounding his controversial personality, his conversion to Islam, his refusal to be inducted into the service during the Vietnam War, and his outspoken views on race, religion and poverty. It seeks to provide a comprehensive and balanced view of the entire, multi-dimensional, larger-than-life man. And it does so in view of the broader issues of his time, such as the fight for civil rights and the Vietnam War. The displays end with highlights of, and opportunities to view his entire fights, his battle with Parkinson’s, how he used his boxing success and notoriety to fight for his race and his religion and the numerous humanitarian awards he has received. 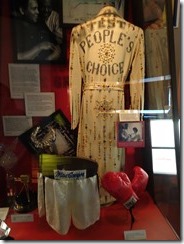 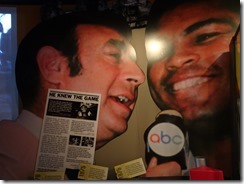 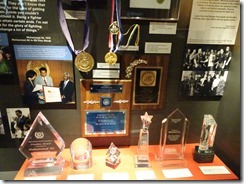 Louisville Slugger Factory and Museum. The museum is a small-scale, “Cooperstown’esque” homage to baseball, with a particular focus on hitters (especially sluggers) and the bats they have used. It has replicas, pictures and stories of legendary hitters and their typically custom-designed bats and also paid homage to women’s leagues. It explains the type of trees (ash and maple) used for bats, the characteristics of the trees that are chosen, how the 40,000 trees (for 1.8 million bats) per year are cored and cut into five-pound blanks and then demonstrated how a craftsman hand-lathed each blank into a two-pound bat, at a rate of about 30 seconds per bat.

That, anyway, is how they were produced before 1980. The current process, demonstrated at subsequent stations, is now automated. The first generation of such tools used 25 different metal patterns to “auto-lathe” bats to precise shapes and sizes. The current generation of automated production uses numerically-controlled lathes to mill the bats much more quickly, with a precession of 1/1000th of an inch. Once the bat is honed to the precise shape, the “Louisville Slugger” brand (along with custom information, such as the model name (typically the name of a famous hitter) and any requested personalized information) is then either burned into or decaled onto the bat. They are then hand-dipped into paint and/or varnish and sanded for a final finish.

The current bat business, however, is not what it used to be. First, automation has slashed the number of people required to make bats, Second, the declining popularity of baseball and the rise of aluminum bats has slashed production from about six million to 1.8 million wooden bats per year. And now, customers can order even individual bats with any level of customization they want, including their own sizes, names and colors.

While we resisted buying a customized bat, we couldn’t resist getting a picture by the giant bat outside of the front door as well as with a giant bat and glove. 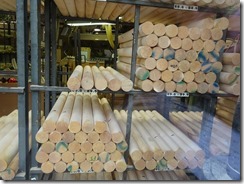 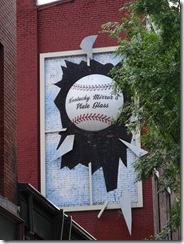 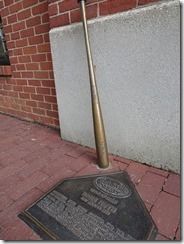 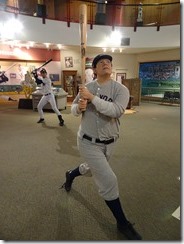 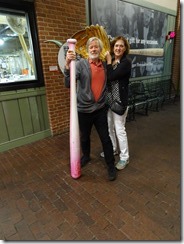 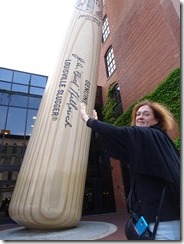 While in Louisville, we wanted to explore the Old Louisville Historic District, the wealthy Victorian-era suburb that has since been incorporated into the city. Luckily, we arrived just as the community visitor’s center begun offering walking tours for the season. Our walk, led by a very competent University of Louisville student, began with an overview of the Frederick Law Olmstead-designed Central Park, followed by a discussion of the history of the neighborhood, walks along some of the prettiest streets and lanes and discussions of some of the most significant homes. The suburb, which was created in the late 19th century (between 1870 and 1905), was home to many of the city’s rich and famous. It is now the largest, intact Victorian neighborhood in the country.

We saw many Victorian, Edwardian, Romanesque, Georgian and architecturally eclectic mansions that were built largely with oil, gas and tobacco money and hosted lavish balls before falling into disrepair around the Depression era. Many had been subdivided and used as student housing or resident hotels until the 1990s when the Bacon and Russell Houston house was bought for a song and renovated. Since then, families and developers have bought dozens of these landmark buildings at prices that typically ranged from $300,000 to $500,000. While it sounds like a bargain, they often has to pour between $500.000 and $1 million into renovations. Although most have been returned to use as private homes, a few have been subdivided or repurposed as B&Bs.

The tour highlighted some of the most architecturally and historically important houses, such as the Conrad-Caldwell House (which is the only one open for tours), the Ferguson Mansion (the first to be built in the neighborhood), the French Republic Ferguson Mansion, the highly eclectic McFarren Mansion and the stunning, huge Pink Palace (which was originally a “Gentlemen’s Club” and casino.

Our guide took us along the lovely St. James Park and explained the role of its lovely fountain as a focus point that transitioned walkers from an early 20th-century fair into the neighborhood, the intimately charming Belgravia Court pedestrian lane and past the life-size carved wooden statue that celebrates the old gaslight lamps and lamplighters. 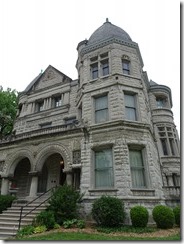 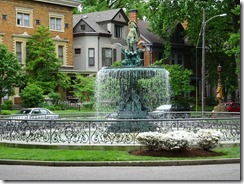 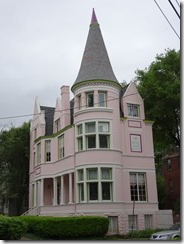 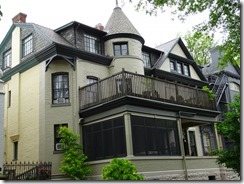 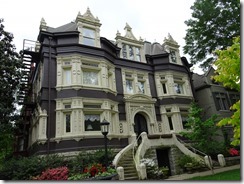 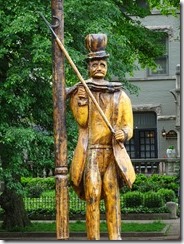 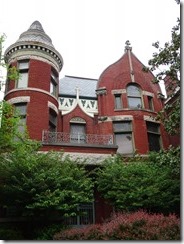 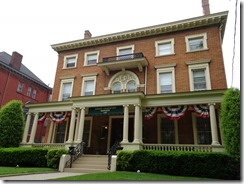