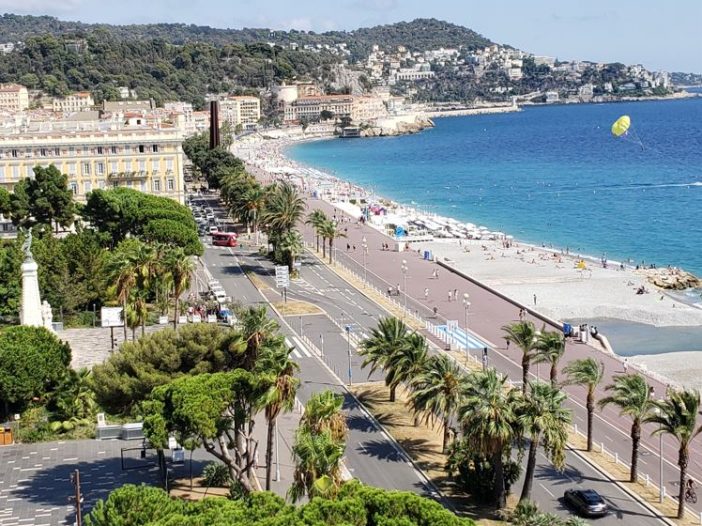 Nice is France’s fifth largest city and is a good base for exploring France’s beach playground the Cote d’Azur. The city is centrally located between Monaco and Cannes and has convenient train and bus service. The public beach and promenade is lined with hotels behind which is a restaurant and entertainment district that is busy throughout the day and packed at night. The low-rise commercial district is attractive and well served by public transport and parks are plentiful, often with imaginative playgrounds.  In short, it is a nice place for us to base our exploration of the French Rivera

We began our exploration with a walk along the Nice Promenade des Anglais. This pretty 4+ mile promenade goes along the Mediterranean coast. The wide sidwalk runs between the road and a pebble beach that is divided between public and private beach. It goes past the grand resort hotels including the palatial hotel Le Negresco, through the streets of the quaint, Italianate-style Old Quarter and briefly, the Les Arenes Roman ruins and the fashionable Cimiez district.

From the Promenade, you can reach Vieux Nice (Old Nice) which is home to picturous narrow cobblestone streets and pastel buildings. Here you find the Nice Opera, Sainte-Reparate Cathedral, Baroque-style mansions, a daily flower market, open-air markets and lively Cours Saleya, a wide opened pedestrian-only street that is lined with restaurants that have scores of outside tables. We found the most interesting section of the neighborhood and their interesting shops, galleries and restaurants, to be the portion of the neighborhood that consists of smaller, atmospherically narrow  streets and alleys. Here the streets are lined with early-17th to early 20th-century apartment buddings whose first floors house a range of restaurants, cafes, galleries, boutiques and nightclubs that keep the popular neighborhood hopping late into the night.

Cimiez is an upscale residential neighborhood on a hill that is home to stately homes and at least two huge luxury apartment complexes, the Empress and especially the  flamboyant, turreted 19th-century, 198 unit Regina.

At the base of Cimiez is Les Arenes de Nimes, the remnants of a Roman arena that could accommodate up to 4,000 spectators to watch all types of entertainment, especially fights among gladiators.

Nice is home to a number of compelling museums. We visited two of them. Unfortunately we ran out of time and didn’t make it to MAMAC, Nice’s Museum of Modern and Contrmporary art.

During our visit, the museum had a special exhibit: Matisse-Hockney:  Un Paradis Retrouve (roughly paradise refound). The exhibit showcased the museum’s permanent collection as seen through David Hockney’s art. It stressed Hockney’s interest in the Matisse-originated “Fauvist” style (which emphasized strong color over realism) during his studies at London’s Royal School of Art and shows a couple of his 1990 Fauvist works from the 1990s.

The exhibit begins with a series of Hockney’s iPad paintings of flowers that he created during a 2021 trip to Normandy. The paintings highlight the two artists’ shared focus on pure lines and strong colors and their pioneering of new techniques.

Both focused primarily on figurative works during periods in which abstraction was in vogue (Impressionism and Cubism during much of Matisse’s career and Abstract Expressionism during Hockney’s). Some of the other comparisons, such as their interests in landscapes, views from windows, lush gardens, human movement, and their familiarity with their nude models, however, felt a bit strained.

This being said, the exhibit is interesting. Galleries are generally arranged thematically, as with focuses on self-portraits, portraits, nudes, landscapes and views from windows. Each gallery contained examples from both artists that demonstrated similarities. Indeed, one of Hockney’s works of a room with a vase of flowers, to a set of French doors and a landscape was an homage to one of Matisse’s “open window” paintings.

Others comparisons, however, while less direct (such as Matisse’s relationships with his female nude models and Hockney’s with his intimate male models) are less direct, albeit still thought provoking.

Of particular interest were short films and videos of each producing their works: Matisse’s thoughtful hesitations while painting a woman’s head (plus a photo of the artist using a multi-foot-long brish to paint a large mural) contrasted with the seemingly thoughtless speed with which Hockney created one of his iPad paintings.

We were also impressed by the quality of the works shown from both artists. This being said, after seeing two relatively recent Hockney exhibits, we were hoping to see more Matisse works in Musee Matisse.

One enters the museum through an auditorium that contains three of the artist’s stained-glass windows and a painted grand piano.

The exhibition begins with a detailed description of the printmaking process and how Chagall capitalized on the evolution of the technology. These begin from the early days of carving a wooden matrix to transfer images to paper, though the use of metal plates and the eventual use of lithography which eliminated the problem of the traditional matrix wearing out after several hundreds, or initially dozens of prints. We then see one of his mosaics before entering the main gallery and the primary reason to visit the museum.

In the 1950s’ Chagall created a series that he called “The Biblical Message”, a series of 15 large, beautiful oil paintings,  each of which portrays a story from the books of Genesis and Exodus. These include The Creation of Man, Adam and Eve Expelled from Paradise, and Moses Receiving the Tables of the Law. Interpretive panels explain the stories, the organization of the numerous images in each and the symbols that he used. Although the paintings are deeply religious (as is much of the artist’s work), they can be appreciated and understood for their complexity, technique and beauty regardless of one’s religious beliefs or knowledge of the Bible.

The museum has three other galleries. One provided examples of sketches and maquettes for some of Chagall’s stained glass window commissions. A second, which was roped off, could be seen (although the interpretive panels could not be read) from outside, exhibits five paintings representing Song of Songs, another of the Bible’s books. The third was closed for the installation of a new exhibit on the images created for limited edition books.

Le Plongeoir (The Diving Board)

We had a good, although not especially memorable meal of grilled octopus with green apple and quinoa and grilled seabass with chimichurri, peas and whipped potatoes along with a Domaine Gautheron Chablis. While the food may not have been especially memorable, the setting was. Our dining room was located atop a sea stack that is connected to the mainland with a footbridge. It offers a lovely view over the rocky headlands and true to the restaurant’s name and logo of swimmers diving into the water, the restaurant is adorned with diving board-like appendages. And during our meal, we watched boys using the rock next to the restaurant as as platform for boys jumping (albeit not diving) into the water.

We had two wonderful dishes and one mediocre dish here. We loved the Seabass en croute baked on a bed of sea salt with white butter sauce and a small pot of perfectly cooked vegetables. The cheese plate, which was advertised as three, came out with five types of cheese including a 16 month-old Comte, Espelette, Saint-Meure, as well as a blue and a goat cheese with figs, greens and toasted pecans. Our disappointing dish was a roasted seabream which paled in comparison to the seabass. Although the restaurant was out of the Cote de Nuit wine we ordered, we had a bottle of Joseph Drouhin Savigny Les Beaune (which was nice after time in a decanter) and glasses of Christophe et Fils Chablis with the cheese. As the restaurant was out of our originally ordered wine as well as an appetizer, they compensated with complimentary glasses of a wonderful after-dinner Liqueur de Cedrat (a less sweet, more alcoholic alternative to Limoncello).

Citrus is a small, quaint Vieux Nice restaurant. We began with an amuse bouche of pureed tomato and zucchini with toast. We moved onto two delicious, very generous-size starters: veal tomato on focaccia; and octopus tempura with zucchini puree, hazelnuts, and hazelnut oil. We ended with a delicious chocolate lava cake with ginger ice cream. Our wine was a bottle of Maison Jaboulet Les Jalets Cros Hermitage with dinner and glasses of Domanie Le Songe Don Bosc (a blend of Counoise and Syrah blend from Provence) with dessert.

We began with a salty, yet very tasty amuse bouche of mussel-chorizo mousse with chickpeas and local chickpea-based socca wafers. Then cam an outstanding whole roasted carrelet fish (similar to turbot) with Champagne sauce, roasted potato, and salad. The dish was nicely complemented by a citrusy Domaine Guerrin & Fils Vielles Vigne Pouilly Fuisse.
The dessert was a tasty (albeit for our tastes had too much pastry and whipped cream rather than custard) vanilla-raspberry millefieulle. In the absence of an interesting dessert wine, we had a quite pleasant Basten St. Antoine white from Provence.

La Reserve is located in a lovely setting with views of rugged coastlines on both sides: mountains in the background on one side and city lights and sunset on the other. Our dinner began with an amuse bouche of panna cotta, watermelon with feta and basil, and a thick cucumber/tomato juice. We split an entrée of a giant king prawn with zucchini, fennel, and candied tomatoes, and a main of poached seabass in rockfish soup with fondue of tomato, and candied and tempura zucchini. Both were very nice. Although we were very pleased with the Domane Faiveley “Clos des Myglands” Mercury 1er cru that we selected, it would have been helpful if they had a sommelier who could explain the differences between two wines we were debating, rather than concluding that they were both Pinot Noirs.

After an amuse bouche of gazpacho cut with melon, we had two dishes. The small, whole sea bream with herb sauce was quite good, although the fish was a bit overcooked. We then moved on to try the house specialty, a Poislane tartlet. The tarlet is sourdough bread roasted on a wood-fired grill and topped wth any of 10 combinations of toppings ranging from tomato, mozzarella and ham, to mushroom, to smoked salmon. We were very happy with our choice of one which came with figs, duck breast prosciutto, mushrooms, crystallized pears and several large chunks of foie gras terrine. Both dishes came with salad. With these, we had a bottle of Domaine Prunier Mercurey Pinot Noir.  The meal was very good and very reasonably priced.

This ceviche bar offers a handful of other Japanese-Peruvian dishes in addition its ceviches. We ordered two ceviches: mixed seafood and octopus with olives, along with a bowl of very thick corn soup. All were delicious and very reasonably priced.

This rooftop bar has a view of Nice’s entire Promenade and out to the Mediterranean. We had a light, tasty lunch of crab-topped guacamole marinated in lime and coriander and tuna tartare with mango and avocado. We enjoyed our meal with glasses of a William Fevre Chablis and Domaine Guenault Loire Valley Sauvignon Blanc.

We stayed at Le Meridian which was located on the promenande anglaise. Our very comfortable room (#602) had a nice water view. It had everything we needed: bathrobes, slippers, refrigerator, coffee/tea facilities and plugs by the bed. The large shower had both a rain shower and a normal shower head. The breakfast had an amazing array of fruit, smoked salmon, cheeses, breads, scrambled eggs, sausage, pancakes etc. The only negatives were slow elevators, a spotty wifi signal in our room (it kept dropping) and the need to hold your finger on the “on” button for the hairdryer.