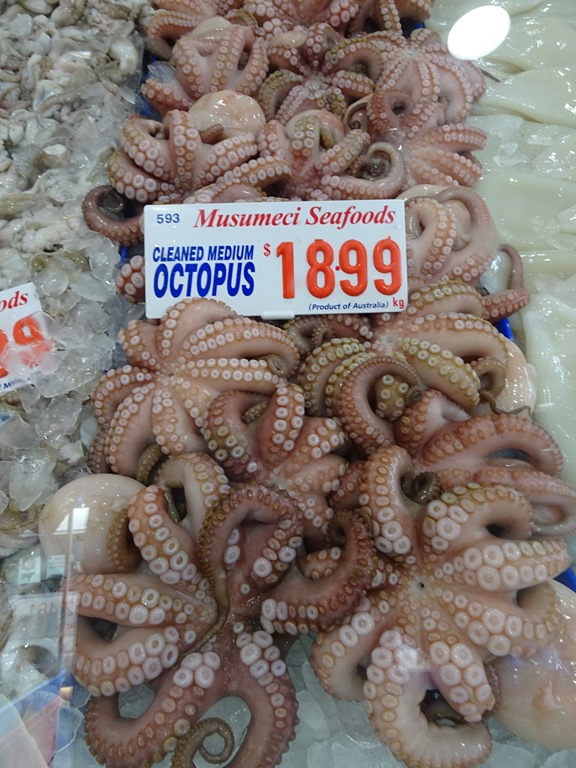 The last big fish market we visited was in Toyko, where we saw huge tunas being auctioned, along with other seafood. We knew that Sydney was a smaller market but we still wanted to visit it. Sydney’s fish maket is a large, fascinating complex with stores with an incredible selection of the freshest seafood, dozens of casual seafood cafes and stands, plus fresh produce and bread. We explored the market in three primary ways:

Shopping in the Sydney Fish Market

We explored all that each retail store and restaurant had to offer while looking for items to stock our apartment. We sampled some of the cafes with mixed results. Many of the places not only sold seafood, but also provided seafood to eat. We both enjoyed the briny Lemontree Passage Oysters from Doyles and three dishes from Peters: Tom enjoyed the abalone with oyster sauce and thought the grilled baby octopus was pretty good, if not especially compelling. Joyce, meanwhile, was not impressed by the octopus and neither of us enjoyed the tough, dry, flavorless grilled lobster. Even so, we returned a few times to shop for uncooked seafood to cook in our apartment. Among our “catches” were blue swimmer crabs, blue-eye trevalla, tiger prawns, king crab legs and Moreton Bay bugs. Nor could we resist the temptation of each return visit to slurp down a dozen or so oysters (especially Sydney Rock oysters) each. Truly a bargain at around $15 USD for a dozen of fresh plump oysters. 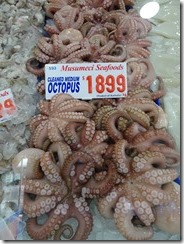 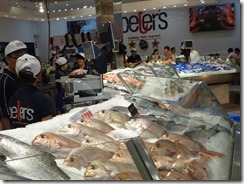 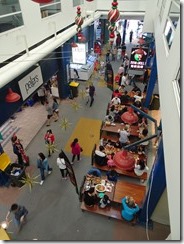 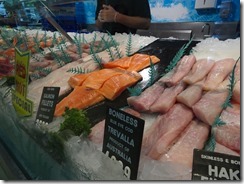 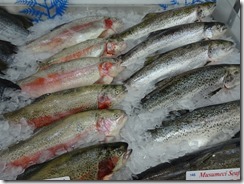 Taking a guided tour through the Sydney Fish Market

We decided to take a 2.5-hour, behind the scenes tour of the wholesale fish market and the trading floor. It turned out to be a fascinating 2.5 hours. The facility, which is a coop owned 50 percent by fishermen and 50 percent by the market’s retailers, is dedicated to helping its members get the highest possible price for their seafood while simultaneously promulgating sustainability of the fish stock and new approaches for keeping the catch fresh (which allows the members to reduce waste and derive greater value from a given catch.

Alex, our very informative guide, explained the process by which 600 different species of seafood is brought into the market five days a week, how it is sorted and graded, inspected by buyers, how the computer-based auction system operated and how it conducts three Dutch-style auctions (developed by the Dutch to speed the sale of spoilable goods for which time is of the essence) simultaneously. He explained how the system regularly sells 75 tons of seafood per week, but up to 125 tons during peak Christmas and New Year weeks, during which the market stays upon day sand night for 36 straight hours. But with all this activity, the process still operates in a way that gets fish from the fisherman’s boat to restaurants and retailers across the city within eight to 24 hours (depending on when the boat comes to port). Meanwhile, a combination of computers, cameras and scanning devices dramatically reduces the potential of errors in getting the correct lots to the right customer, at the right time.

He explained the processes and relative roles of long-line fishing and trawling, the efforts the coop is taking to improve the efficiency while also reducing the prospects of overfishing and environmental degradation of each approach. Also, how some fishermen develop reputations that allow them to command big premiums for their fish and how up to half of what fisherman get for their fish goes to the operation of the market and especially for sustainability research and best practices development, and another 40 percent goes to maintaining and operating his boat and to paying the crew.

Most interesting of all was the tour of the floor. Although pictures were not allowed,  we were able to examine more than a dozen seafood species ranging from highly priced (and often exported to Japan) Grade A tuna and swordfish; to lobsters and Tasmanian king crab; to sharks and a number of lesser priced, underappreciated species that make for very good eating, He explained how some fish is graded (although much is not), various methods for determining when a fish is fresh (note—the color of the gills is the single most important means) and in some cases, when it is too fresh to eat. He discussed the precise times that softshell crabs must be farmed and the how picking any softshell crustaceans just a couple days late results in greatly diminished muscle mass (energy from which is converted to redrawing shell) and taste. He explained the various ways of preparing different types of fishes and the pros and cons of each.

Then, in a brief walk through the retail market, we discussed the different tastes of different types of oysters (especially the creamier Pacific and brinier Sydney Rock) and the conditions that lead to these tastes—and why Australian shuckers rinse the shelled oyster with fresh water while their U.S. counterparts attempt to preserve as much of the tasty oyster “liquor” as possible (since Australian oysters are typically farmed in pure salt water while Americans’ are typically farmed in areas that in which salt and river water combine). We also had a chance to “babysit” an average size of the largest crab in the world—the Tasmanian king crab–(about 5 kg) and to learn about the giants of the species (up to 25 kg). 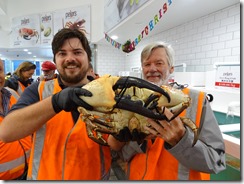 Although the fish market, from the outside, appears to work well as it is, it is apparently too confined, and not properly laid out for optimal operations. It is, therefore, in the process of building a new purpose-built facility that will be four times the size of the current market that will better address the needs of wholesale buyers and accommodate the rapidly growing demand for retail and consumer services.

We often like to take cooking classes when we travel, so why not at Sydney’s seafood market which offers various classes, including classes on the basics of seafood buying, storage and handling. It also offers dozens of watch-to-eat classes that help people learn to better prepare and get better tastes from the seafood they eat (which, hopefully, will encourage them to buy and eat more and different types of seafood). It, for example, has classes on preparing foods including chili crab, paella, salt and pepper prawns, on Italian and Spanish seafood recipes, on recipes from leading Australian chefs and on seafood canapes.

We chose the class on barbequing a wide range of seafood from various types of fish, to shellfish and squid. Our three-hour, 24-person class began with a very fast, high-level, auditorium-style demonstration and explanation of five dishes, but with guidelines and recipes that could be applied to many other types of seafood. The dishes were:

For each dish, the instructor explained not only the steps to take in preparing the dish, but also dozens of other tips ranging from the selection of especially fresh fish, to guidelines for tenderizing and marinating different seafood, to when to oil the fish versus the grill, when and how to turn fish on a grill and most importantly, how to tell when fish is ready to be removed from the grill without having to cut into it—and the importance of removing it just before it is fully done (since it continues to cook when removed from the heat). We learned when to use high-temperature fast cooking, versus lower-temperature slow cooking (and in between), more efficient ways of removing alimentary canals from shellfish and of boning small fish with large numbers of small bones, and how to tell the difference between calamari and other types of squid and how to clean the and remove the ink sacks, beak and membranes from the squid (hint: buy already cleaned squid as it is much easier). And how to keep, prepare and grill the prawn bodies as crispy treats and the heads as decoration.

Then came the hard part—applying what we learned to prepare our own meals. We were divided into groups of four, where each person prepped some of their own seafood, and then divided the perpetrations of the marinades, the salads, the sauces and the cooking among ourselves. (Thankfully, all the ingredients were pre-apportioned and the clean-up handled by others.)

It was all downhill from there. We then had to eat and critique our meals. The critique stage was especially easy, since we all did such wonderful jobs that everything turned out perfectly. And the eating stage was made all the much easier by having wine to go with the food. This was a 2016 Taylors Estate Riesling from Clare Valley. The biggest problem we faced in eating was in finishing all the food we prepared—something we found to be an impossible task.

In the end, we certainly found the class to be interesting and the process of learning new techniques to be helpful. We did, however, have some reservations. First, the instructor moved so quickly through the demonstration phase that it was impossible to fully understand or grasp all she was doing. (She did, however, warn us of this ahead of time, explaining the time constraints and the opportunity to get personalized help during the hand-on potion of the class). The hands-on part went relatively smoothly except that not all ingredients were properly labeled and the instructor and her two assistants (one of whom did not understand all the steps herself) were spread too thinly across 24 people doing things they had never done before. Nor will we ever apply some of these processes again. We, for example, always have and always will buy pre-cleaned calamari and will never bone a fish as small and bone-filled as a garfish. While the class was certainly helpful—and the results were definitely worth the effort–it was not among the best of the many cooking classes we have taken. 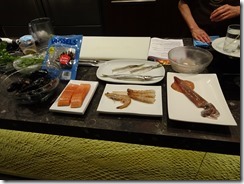 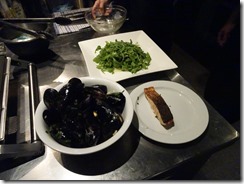 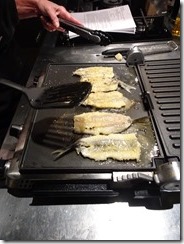 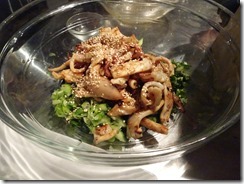