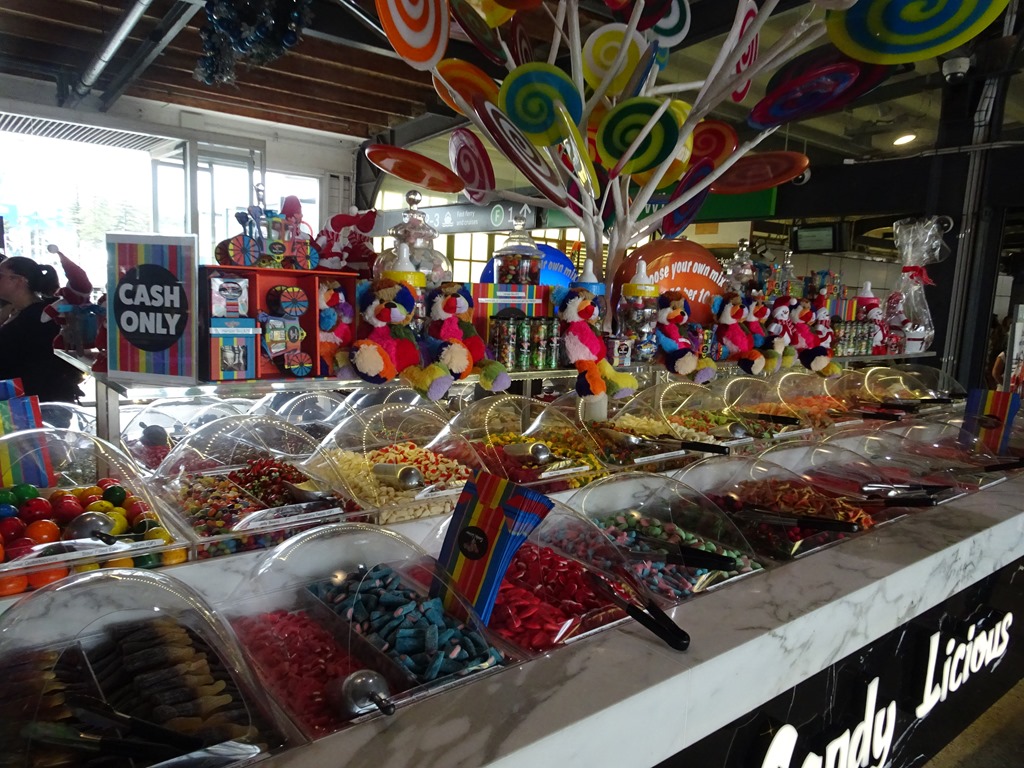 Manly is a town that lies on a stretch of land between the Sydney Harbor and the ocean that is a seven mile (30 minute) ferry ride across the harbor from Sydney. Like Bondi, it is a beach and surfing community with its own beach, beautifully-eroded rocky headlands, ocean-side cliffs and beach-oriented (inexpensive cafes, beach ware and souvenir shops) path to the beach (the Corso). It even has its own landmark beach hotel (the New Brighton, named after the British beachtown after which the town was modeled), and its own beachfront pavilion and promenade. But unlike Bondi, Manly has its own sealife attraction (the Manly Sealife Sanctuary), its own college (International College of Hospitality and Hotel Management—which was formerly a seminary) and even its own national park (Sydney Harbour National Park).

The town’s buildings also represent a range of revival architectural styles including Georgian, Victorian, Tudor, Spanish Mission and believe it or not, even Egyptian. It even has its own national park and important national historic site.

As the saying goes, the journey was half the fun. The ferry left Circular Quay, passing the Opera House, the Harbor Bridge, one of the huge cruise ships that always seems to be in the harbor, and as we departed, the entire downtown area receding into the distance. We also passed boats—all type of boats from other ferries, to giant pleasure craft to sailboats and even a racing yacht. Then there were the towns we passed along the way, the parks and the headlands.

The Manly Ferry Terminal was almost an amusement area, with candy shops, ice cream shops, a small children’s play area and beaches on either sides. Beyond those, pleasure craft harbors and clubhouses for various boating and swimming clubs. 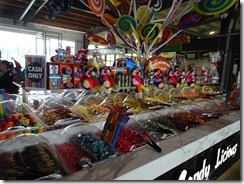 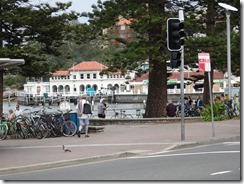 The Corso, meanwhile, is a pedestrian street, lined with shops and casual cafes, some in interesting or unusual buildings, including the Egyptian Revival-styled New Brighton Hotel. Then to the famous swimming and surfing beach, where we had a very good and very scenic (overlooking the beach) lunch at The Manly Pantry (see below) . 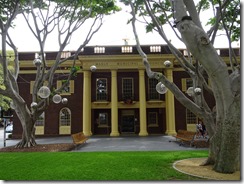 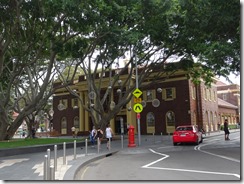 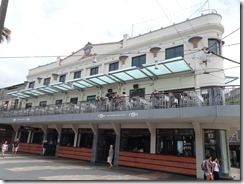 After lunch, we strolled along the beach’s giant evergreen-lined promenade and its walls on which local artists are commissioned to paint murals. Then past the 1950’s style pavilion, the salt water pool and the rocky Cabbage Tree Bay shoreline, with its series of fun, small metal sculptures embedded in the retaining walls. And atop the cliffs above these walls, expensive, modern, glass-walled homes designed to capitalize on the majestic views. 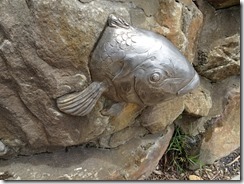 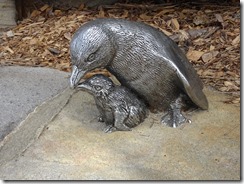 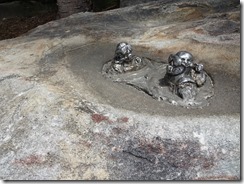 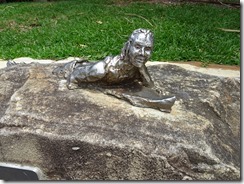 The coastal trail continues past another, smaller beach (Shelly Beach) and into a small forest that leads to a series of majestic cliffs overlooking the ocean. The walk we were taking then led up Bower Street, the street on which the glass-walled homes we saw from below, are located. Although we couldn’t see much of those houses, those on the other side of the street were just as interesting, with styles that ranged from Tudor Revival to ultra-modern and everything in between. 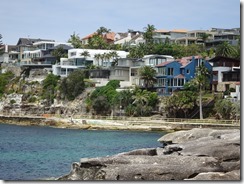 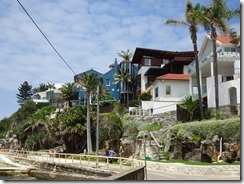 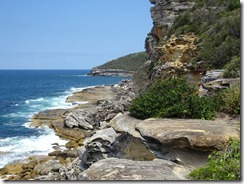 Following our way through the lovely hilltop neighborhood, we reached St. Patrick’s Park, which is topped by the magnificent International College of Tourism and Hotel Management—a building that was originally created as the country’s first seminary. Across the street is the former Archbishop’s mansion. 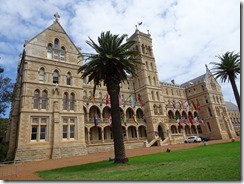 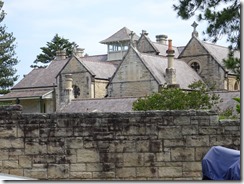 We then deviated from the standard tour to visit the Sydney Harbour National Park and the nation’s first and largest Quarantine Station—a station that diagnosed, treated and housed in quarantine, more than 150,000 immigrants over its almost 150 year history.

Some of the barracks and smaller buildings have been converted into residences and an “Artists Precinct”. Most have been converted into a large, multi-acre, multi-building hotel complex. At the base of the complex lies the dock and the original entry buildings in which entrants were processed, the boiler that provided much of the facility’s hot water, and the showers (for disinfecting entrants and the autoclaves (for disinfecting clothes and luggage of the entrants).

The entrance station has been repurposed into a museum that explains the history of immigration into Australia, the decision to quarantine new entrants to minimize the chances for epidemics and the long process of building and upgrading the facilities and the processes for screening, diagnosing, isolating and treating entrants from 1828 through the facility’s 1973 closing and repurposing into a disaster relief center and eventually, in 2006, into hotel complex and national park. The museum traces the history (including the overt prejudice) of the country’s immigration system, the growth and evolution of the facility and the ways in which its philosophies and practices evolved, how it treated immigrants from its initial history in working with convicts, to free settlers and, after 1873, how it segregated people who travelled to the country as first, second and third class, and the differences in their accommodation, food and treatment (note: travel first class, not third). 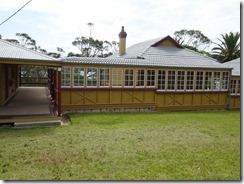 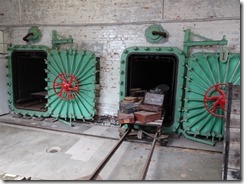 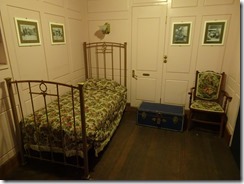 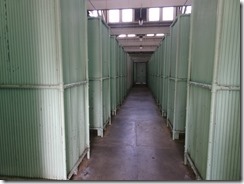 The museum also examines the history of the diseases and epidemics that swept through Australia, the landmarks in and evolution of modern medicine and how Q station evolved to accommodate ever-changing best practices over its life.

The Pantry Manly (in the town of Manly), overlooking Manly beach, where we had lunch and a birds-eye view of the beach and its sunbathers, swimmers and surfers. We shared two dishes, both of which were very good. The first was a prawn salad with avocado, crisp prosciutto, asparagus, goat cheese, walnuts and citrus dressing. Then seared salmon with a salad of mixed greens, cherry tomatoes, walnuts and balsamic dressing. We had a glass of Adelaide Hills’ 2015 Bleeding Heart chardonnay to accompany our food.