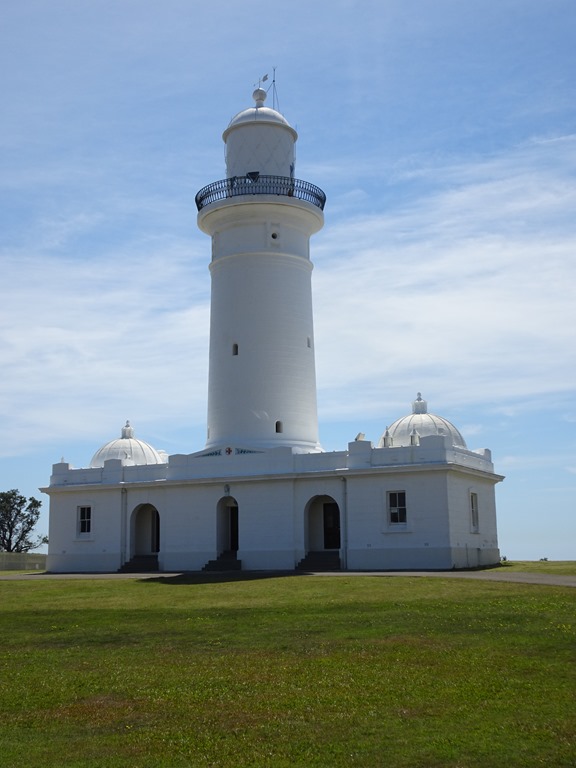 Thanks to the easy to use Sydney’s ferry system, we spent one of our days in Sydney focused on another rugged coastline—that of the South Head peninsula, of Watsons Bay and Vaucluse. Like the Manly coastline, it consists of a combination of steep oceanside cliffs, jagged rocky shorelines, inviting coves and sandy beaches.

This three-hour walk (plus an hour for lunch) began at the venerable, majestic Macquarie Lighthouse. The site began as a nightly timber fire lit to warn ships away from the rocks. Macquarie then commissioned Francis Greenway, his favorite convict-architect, to design a proper lighthouse—a structure that stood from 1818. It was replaced by the current structure in 1883. 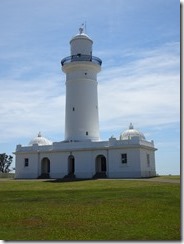 Even a lighthouse, however, did not prevent the worse maritime wreck in the country’s history. In 1857, 122 people perished when a gale drove the Dunbar onto the rocks sand only one person survived in a rescue that required him to be hauled up a steep cliff face known as The Gap. This cliff is so dangerous and iconic as to be one of the area’s most popular spots for people considering suicide. The Dunbar disaster is commemorated by a plaque and the ship’s anchor, which has been mounted on the cliff. 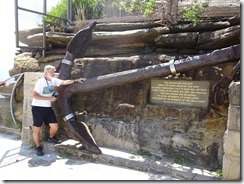 The trail along the dramatic cliff face passes an even older tower, the 1843 Signal Station and leads to the dramatic Gap Bluff and to South Head, the tip of the peninsula and the entry into Sydney Harbor. This head is home to yet another lighthouse: Hornby Light, which was built in 1858. The cliff faces, particularly South Head, are pocked with gun emplacements. These emplacements have been part of the landscape (although in very different forms) since 1785, when a cannon was used to signal the arrival of incoming ships. They turned defensive in the 1820s when England anticipated a potential attack by United States gunships. England revised them for defending against a potential French incursion in 1853; the Germans in 1914 (WWI) and the Japanese in 1942 (WWII). 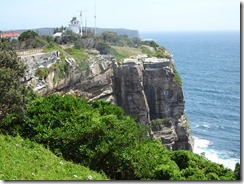 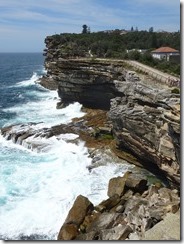 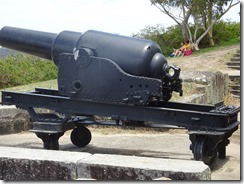 The inland side of the head is less imposing with a series of rocky shorelines and coves hiding several small beaches (including one that appears to be at least de facto, clothes optional). The largest of these is Camp Cove beach, which takes you to the town of Watsons Bay. 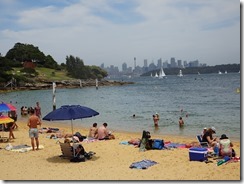 The shoreline of bay is lined with casual, unassuming wooden cottages (many of which sport signs importing officials “Don’t turn Watsons Bay into Darling Harbour (one of the city’s most touristy entertainment/shopping/restaurant areas).

By the time you reach the Marine Parade beachfront/wharf-front promenade, the shore is dominated by the venerable (from 1885) Doyle’s Beachfront Restaurant, where we had lunch on a balcony overlooking the busy ferry wharf, the pleasure boat harbor and, over the sailboat-littered bay, the Sydney skyline and Harbour Bridge.

After lunch, we continued walking the shoreline, past parks and beaches and into the very upscale residential neighborhood of Vaucluse. A stroll along the street named The Crescent provides an upscale view of Vaucluse. Fences, lines of thick bushes or large gardens generally blocked views of these “McMansions”—at least those that faced the water. Still, from the occasional glimpses of these homes, and those on the still very upscale inland side of the street, it appears (at least judging by the architectural styles of the homes) that the neighborhood is divided between old money, new money and especially by the money that pays to demolish one large home to build and even larger one. 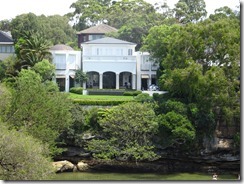 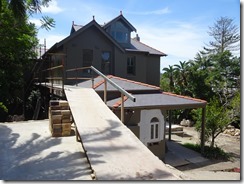 Crossing through a small forest took us to a suspension bridge that overlooked a small, lovely cove and neighborhood beach that was overlooked by yet more grand homes. A short walk on the other side of the cove leads to leads to the largest and oldest of this area’s estates: the Vaucluse House, gardens and beach, all of which are now public museums and parks. An Irish knight built the initial cottage on the estate in 1805.  William Charles Wentworth, an illegitimate son of convicts who became one of the most powerful and progressive of Australian-born colonists, bought and expanded it. The Gothic Revival style residence is now furnished in period style and fronted by a small, but lovely garden that leads down to the beach. 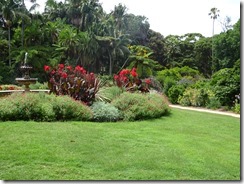 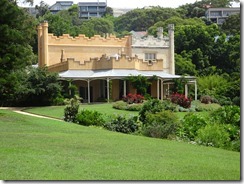 Our last stop of the Watsons Bay-Vaucluse walk was Nielsen Park, a pretty forested park that opens to one of the area’s most popular beaches. 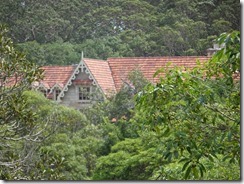 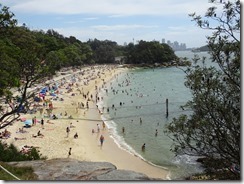 Doyle’s On The Beach in Watsons Bay, is the parent of Sydney’s oldest seafood restaurant groups. Founded in 1885 at the Watsons Bay location, it has expanded continuously, adding rooms and a takeout stand to accommodate the throngs of patrons. We were lucky to have arrived when we did (about 1:00 on the Thursday between Christmas and New Year), having a choice of seats inside, on the outside deck or on the upstairs balcony, We chose the balcony with its sweeping view of the tranquil boat harbor, the very active ferry wharf and over the sailboats and the bay to the city skyline. Our food was at least as good as the view. Tom had a large, perfectly cooked and very reasonably priced grilled seafood with pineapple, chili and mango salsa on a bed of perfectly cooked green vegetables (green beans, English peas and brocolini). Joyce had the house specialty of fish and chips with chili plum sauce. Doyles, however, offers a choice of four premium fishes for this. Joyce chose the whiting fillet, which was also very good. We both had a glass of Doyle’s 2015 unoaked chardonnay (made by Tyrell in the Hunter Valley.) Although we were amazed at how quickly the food came in such as busy restaurant, we were less impressed by the follow-up service. And, as  mentioned above, we are glad we got there when we did since, when we left, there was a line of perhaps 40 people waiting for our table.