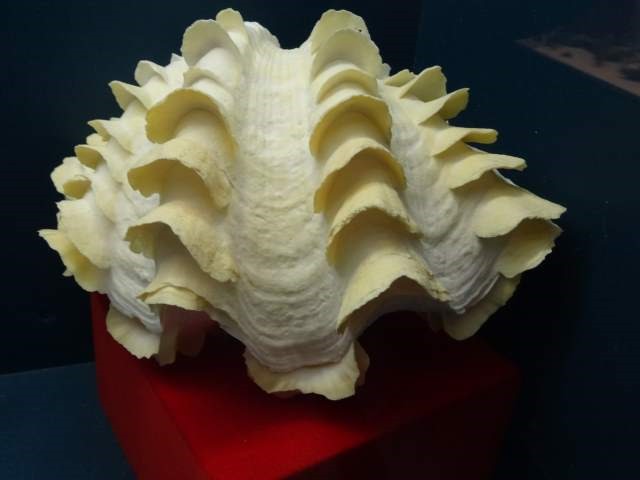 As we made our way out of Normandy, we drove next into Brittany. Our first stop in Brittany was the oyster capital of Cancale where we had an opportunity to learn more about the Britain cousin of the Norman bivalve we had so enjoyed for the last few days in various restaurants. And what better spot to learn than a working oyster farm/museum that had a talk, followed by an introductory movie and then a tour?

La Ferme Marine (aka, Musee de l’Huite) has a shellfish museum, with examples and discussions (only in French) of hundreds of different species of oysters. 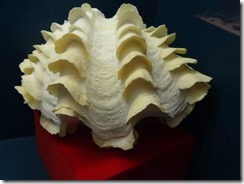 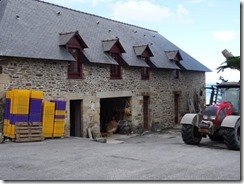 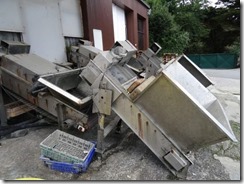 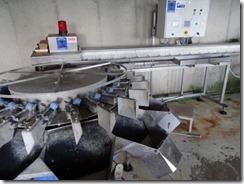 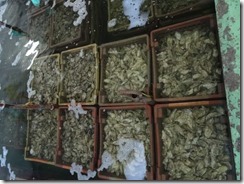 The talk showed and explained the lifecycles and differences between the two different oysters grown in Cancale—the cup oysters (which account for 80 percent of the production) and the flat oysters (Belon), which are limited since so few survive to maturity. Since the local oysters and habitats were so depleted by centuries of mass scraping of the ocean bottom, most ”spat” (tiny oysters of whose shells have begun to form) is now bought from Japan and grown in racks that are about a half meter off the ocean floor.

In their natural life cycles, oysters change sex after each spawning cycle. Males and females release clods of sperm and eggs into the water. When the eggs are fertilized, they float around feeding–and typically being fed upon. The tiny percentage that do survive, begin to grow shells. These spat then roam the ocean floor looking for a surface onto which to connect (rocks, other oysters, pieces of rubber, plastic, and so forth), where they filter feed on plankton brought in by waves and tides. They grow quickly over the first year and then much more slowly with their age denoted by growth rings on their shells.

Commercial production reduces many of the risks faced in nature. Spat, for example, are provided special surfaces onto which they attach and grow. When they reach sufficient size, they are removed from these surfaces and hundreds of them are placed in plastic mesh bags and laid upon metal racks (again, about 50 centimeters off the ocean floor. The racks prevent them from being covered by mud and other sediment, protect them from some predators and allow better water circulation to provide better access to the sea’s nutrients. The nets, meanwhile, protect them from other predators, prevent them from dispersing across the ocean floor and greatly facilitate ongoing maintenance and harvesting. Maintenance is a continual process of shaking the bags to ensure that the shells do not grow around the mesh and, as the oysters grow, removing some oysters to bags with fewer others, so they have room to grow without attaching to each other.

When the oysters are ready to harvest, they are sent through a mechanical spray washer where they are individually washed. They are then put into other racks to spend time in an indoor saltwater pool where they undergo additional cleaning and are “trained” (by exposing them to periods outside the water) to close their shells when they are removed from water for shipment. (This, of course, keeps them from drying out or spoiling and gives the water time to absorb the flavor required for fine oyster “liquor”.

When the oysters are ready for shipment, they go through a final pre-shipping inspection, mechanically sorted by size and packed in baskets that are covered with seaweed. Sizes, by the way, arte counter intuitively labeled, with 5 being the smallest, 3 normal size and 1, 0, and 00 being the largest. And what is to be done with all the oyster shells? In addition to oyster shell paths and shorelines, they are used for cosmetics, mascara, and in paint for the white lines in roads.

All that learning worked up an appetite. So we drove down to the town’s port, whose main street is lined with restaurants and bars that specialized in guess what—oysters. We were in the mood for a basic, open-air oyster bar rather than for a formal restaurant. We selected a very basic bar that offered a choice of various size oysters—at a very reasonable price.

Pied d’ Cheval met, and indeed surpassed all our criteria. We sat down for a feast of a dozen apiece of #1 and #2 oysters (#2s are perfect for us) and mussels steamed in Britany cider and bacon, accompanied by a bottle of Muscadet. The 3 generations at this restaurant farm the oysters that they sell. It was interesting to watch how they used a metal lever to shell the oysters. 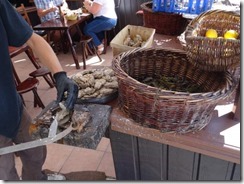 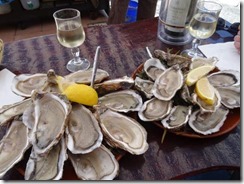 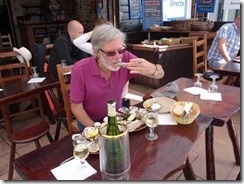 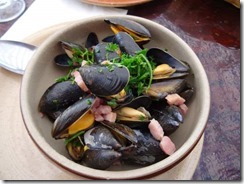 The incredibly popular tourist town of St. Malo is just a skip away from Canale. But while Canale is primarily a fishing town, St. Malo is all about tourists and ferry transit. While it is almost impossible to find a parking space in Canale, it is absolutely impossible to find one either in or around the walled city of St. Malo—at least when we were there. We, had to be satisfied with a difficult and frustrating drive through the narrow streets of the walled town (searching fruitlessly for parking spaces). Still, we did manage to see and get a feel of the authentically restored (after devastating WW II bombings) 18th-century character of cobbled streets lined by tall buildings housing scores of tourist stores and restaurants on their ground floors, not to speak of the pedestrians who clearly owned the streets. But for all our driving and frustrating and fruitless efforts to find parking, we certainly appreciated the pretty town. 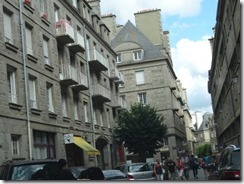 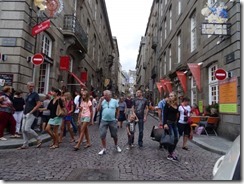 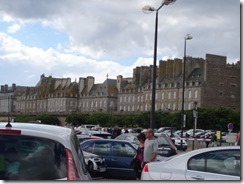 Speaking of packed, pretty tourist towns in which there is no parking, we also took a spin through (again, with no chance to stop in due to the lack of parking) Dinard. This is an upscale resort town with a casino, and the day we were there, a street fair that closed a number of streets and jammed traffic on the others.

Although we intended to spend more time along the so-called Emerald Coast, with its rugged, Maine-like coastline, this will have to wait till our next trip—ideally well away from the French vacation month of August when it seems that all of France is in these towns. Maybe January? Not!