Continuing on our Costa Rica/Panama Canal cruise with Lindblad National Geographics, we left Costa Rica and entered into Panama and arrived in Panama’s Coiba National Park. This group of islands, once a penal colony to hold President Manuel Noriega’s political enemies, is now one of Panama’s newest national park. It is the third largest marine park in the world with the second largest stand of hard coral and one of the largest range of tropical fish in the eastern Pacific.

Although the preliminary descriptions sounded interesting, we were skeptical. After all, we had never heard of the west coast of Panama as a premier diving or snorkeling site. Besides, we had just come from five days of wonderful snorkeling in Bonaire. And before that, off Indonesia’s Komodo Island, Zanzibar’s Chumbe Island and Oman’s Masandam Peninsula. What were we likely to find off the Pacific coast of Panama to hold a candle to these sites?

Our ship targeted one specific island in the park: Granito de Oro, or Little Grain of Gold. It is one of the park’s smallest and prettiest islands–actually so small to be more of an islet, than an island. Half partially shaded silky sand beach and half rock formation that stretches down into the water, it creates many small crevices for fish to feed and hide–and for us to explore. Beneath the surface, in addition to the rocks, is a surprisingly large, varied and colorful array of coral. Primarily dense patches of tiny, delicate staghorn (which our guide called branch), brain (but without the ridges we generally associate with brain) and plate with upturned edges (which they, for good reason, refer to as pizza crust–especially when they are filled with green coral). While much of the coral was grey, we saw wonderful patches of bright green, pink and patches of bright white colors, especially at the tips of the branches.

And then there were the fish: large schools of rainbow wrasse and sergeant majors, along with large, ever-lovely parrotfish and yellowtail and a surprisingly large numbers and sizes of butterfly, damsel, angel and puffer fish and elegant moorish idols. While a few larger pelagic fish also passed by, we were almost too fully engaged with our new Ridleys turtle swimming companion to pay the much mind.

So, if you are really looking to get away from it all, lay on a deserted island with silky soft sand, littered with seashells and thousands of small hermit crabs, this island is for you. But as hard as you may find it to leave this paradise, the sea surrounding the island is the greatest attraction: coral, fish and turtles of all shapes, sizes and colors. A true patch of heaven. 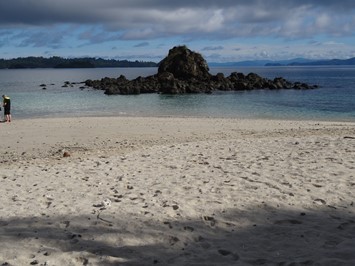 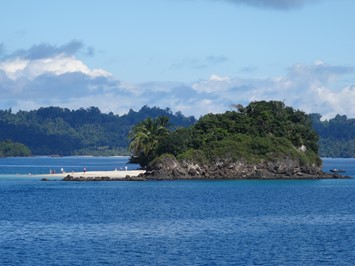 Leaving the park did not translate into a loss of scenery. Rounding the Peninsula de Azueros into the Gulf of Panama, produced views of a panorama of hilly, rocky islands to our east. To the west, dark clouds and scattered storms were clearly visible in the distance. And by our bow, dolphins riding our wake.

During our 18 hours of cruising, we passed a number of small islands, fishing villages and boats (the latter of which were easily spotted by looking for groups of circling frigate birds on the lookup for fast, easy take-out meals). By the time we were within 20 nautical miles of the canal entrance, we had a couple of additional stops to make:

Bona Island, whose access to the trade winds creates an upwelling of nutrients in its seas. This attracts millions of small fish to the surface, which in turn, attract millions of seabirds to dine on the fish, lay their eggs and raise their chicks. We disembarked into an 8-person Zodiac transportation boat (now called a Dib as the company had to buy only US-made boats and the Zodiacs were made elsewhere) cruised along the shore provided incredible bird watching opportunities. Among the primary species were brown and blue-footed boobies, brown pelicans and huge numbers of frigate birds. Some, such as the brown boobies are migratory, visiting the islands only to give birth and feed. Others make the islands their permanent homes. Each have different courting, mating, incubation, parenting and feeding patterns. Boobies. For example, typically dive to 30 to forty feet for their food. Pelicans, meanwhile, typically float on the surface and then dive to about 10 feet. Frigate birds, on the other hand, generally skim the water, seldom venturing beneath the surface. Often, they just steal. When they find a boobie carrying a delectable morsel, they will often peck at the bird until it drops its meal, and then dine themselves. Nor are they above raiding other species sets for their eggs or nest-building materials. Given this opportunities, other species tend to nest on different sides of the island from frigates, with each typically in their own sections of the island.

While we certainly saw birds, taking pictures from a continually bobbing Dib was challenging. Even so, we saw interesting animals and behaviors. Brown boobie chicks, still with their cotton-white feathers, stretching their wings. Another nest, with slightly older chicks, was being scoped out by an iguana. The feet of their blue-footed cousins, meanwhile, tended to be a lighter, less brillant blue than those of birds in the Galapagos. Then there were the frigate birds, some of the adolescent males of which were practicing inflating their scarlet red neck pouches that, when they mature, will be used to attract mates. A few even ventured to fly with their pouches inflated. 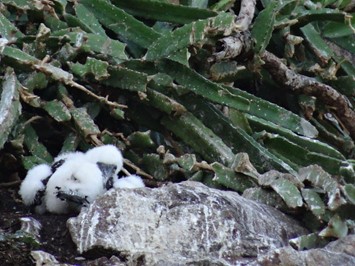 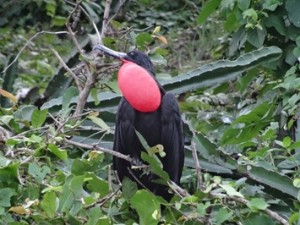 Isla Tobaga, aka, “Island of Flowers”, is a tiny 571 hectare island with a big history. Discovered by Balboa in 1513, it was originally home to Indian fishermen whom the Spanish enslaved. It has the second oldest church in the Americas (San Pedro, which was built in 1524), was a base for 17th century pirates (including Henry Morgan and Francis Drake) looking to prey on Spanish ships, a way-station for 49ers on their way to the California gold fields, a convalescence center for ailing Canal builders, a WWII detention center for German POWs and temporarily, in 1887, home to French artist Paul Gauguin.

Then, after reaching our anchor spot to await our entry into the canal. But before entering, we had a chance to learn the history of and the process of building the canal: the history by one of our Panamanian guides. The building by watching a David McCullough video, “A man, a plan, a canal, Panama.”