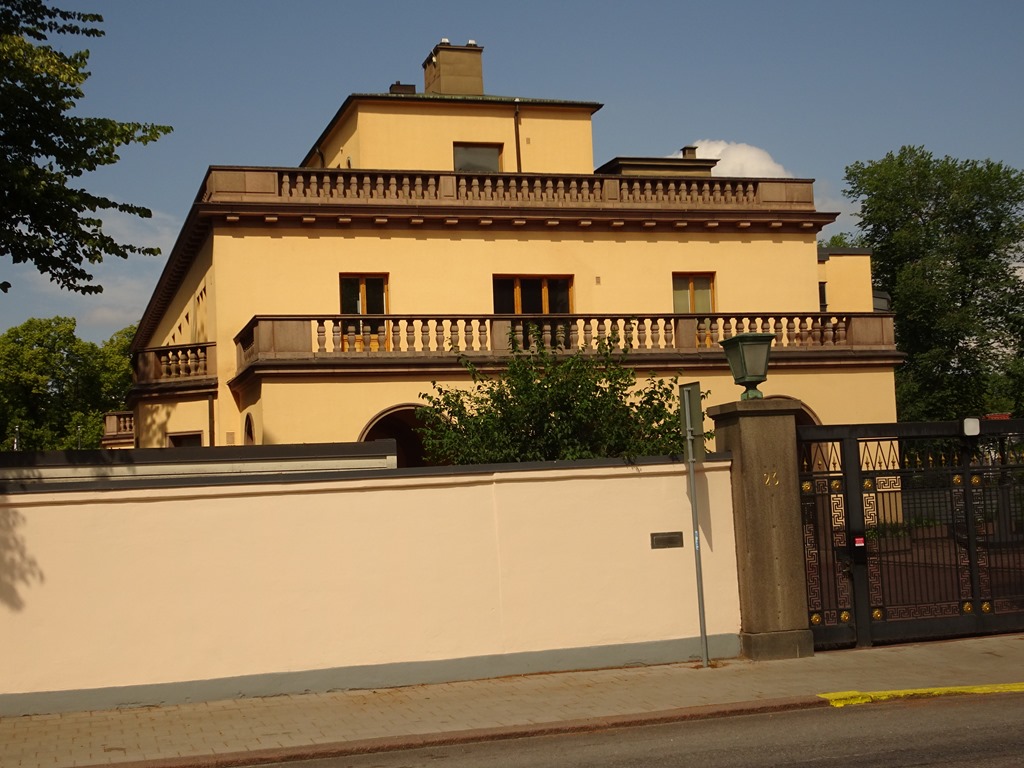 From Helsinki, we did a day trip to explore Turku Finland–the oldest city in Finland. It can trace its roots of the Medieval section—and the original sections of the cathedral and castle—back to 1300. But, as happens in primarily wood-based cities, Turku has had several fires. The latest, in 1827, destroyed most of the earlier wood structures. The cathedral and fortress, along with a few other sites such as Rettig Palace (now history and contemporary art museums), the Sibelius Museum and a number of other impressive buildings are still located on the south bank of the river. 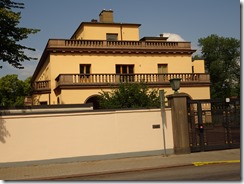 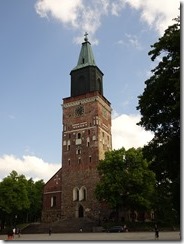 But, while the oldest history remains on the south bank, fires drove more of the pre-19th and much of the 19th and 20th century development north of the river. Most of this development is centered around the Great Square, which now serves as a farmer market and celebration area.

Emergence of the North Bank

The oldest and one of the most interesting of these north bank buildings is the Qwensel House, a wooden building dating back to 1695.Once the home of a prominent doctor, it has been restored into circa late 1800’s pharmacy museum and furnished upper middle class home, complete with one of the original fireplaces and reproductions of the original linen wallpaper that was hand-painted with popular designs of the period. The somewhat new section of the building, from the early- to mid-18th century, is behind the original structure. While initially used to house servants and animals, it is now home to a café. 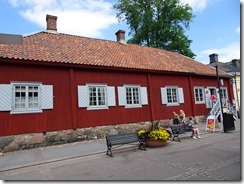 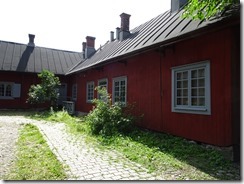 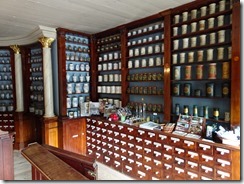 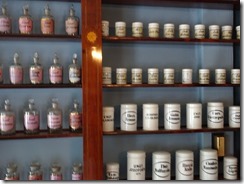 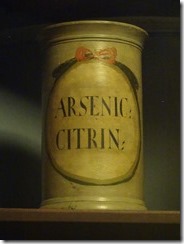 Other historic, north-bank riverfront area buildings include the: 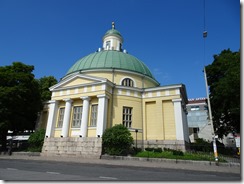 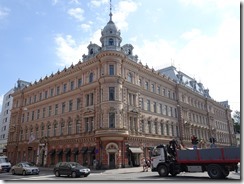 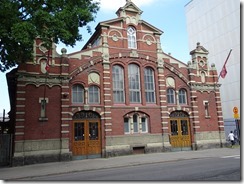 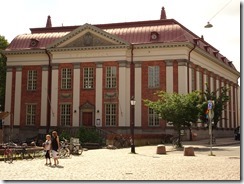 But for all the historic buildings, the most fun and interesting of the north bank areas is the riverfront itself, which is lined with cafes, restaurants, occasional boats and lots of strolling people. 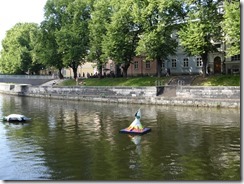 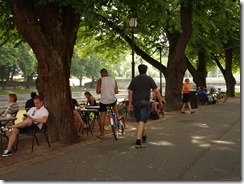 A Brief History of Finnish Art

The Turku Art Museum is well way from the waterfront. It too has an historic and architectural pedigree as a late 19th-century, dramatically Art Nouveau sandstone structure. In addition to its grand exterior, it has a lovely staircase and a fun, cast bronze door handle in the shape of a cougar. Nor does its hilltop position in the middle of a popular and pretty park hurt. 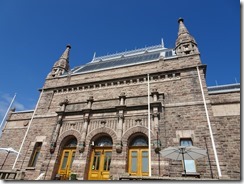 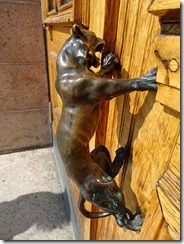 Better yet are the museum’s contents. The permanent collection traces the history of Finnish art from the early 19th to the early 20th centuries. It is organized in galleries by period, with the early works being of a Romantic style, a generally idyllic vision of nature and of well-to-do people and their homes that was influenced largely by Italian and German art. 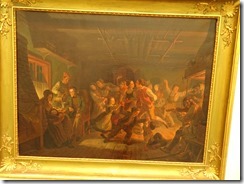 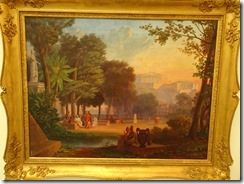 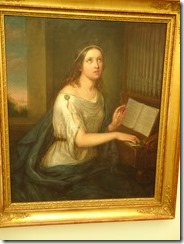 By the late 1800s and early 1900s, which is the so-called “Golden Age of Finnish Art”, styles were increasingly influenced by the French Realist style, which focused increasingly on local landscapes and “common” rather than elite people. 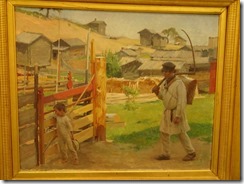 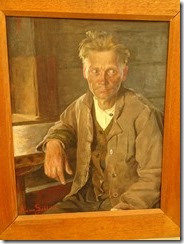 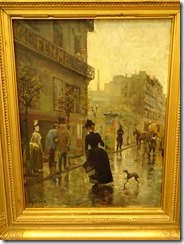 Then, toward the tail-end of this period, Symbolism began to take hold. While most subjects still came from nature or real people, artists took more liberty in interpreting them to reflect moods. 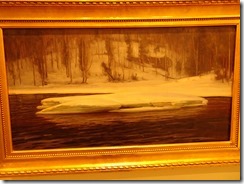 By the early 20h century, Finnish artists became increasingly influenced by French Impressionist and Fauvists and later by Norway’s Edvard Munch, moving rapidly into the Modern era, with more impressionistic images and ever more vivid colors. 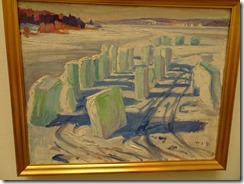 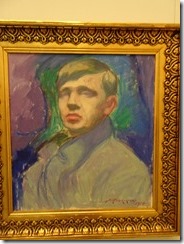 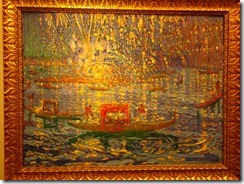 The Museum was also staging a few temporary exhibits during our visit. These include videos by Mexican visual artist Carlos Amorales and some fascinating animal cultures by Swedish artist Lars Brunstrom, who studies human and animal movement and portrays subtlety of movement, such as in a series of works that captures the jumping of a frog (including one image that appears to be in mid-flight with no visible means of support) and mechanical sculptures of hyenas that move in slow motion. 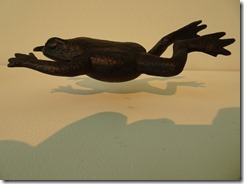 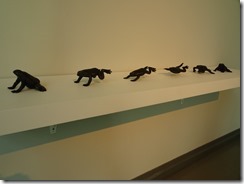 One other large exhibit portrays Finnish works that remained from the Baltic Exhibition of 1914, an international art show, similar in concept to the era’s World Fairs, in which the best works of all Baltic countries were brought together in the same venue. The timing turned out to be auspicious for the art—a time of transition between Realist and Modernist styles and the middle of Finland’s own Golden Era—but less so for the international camaraderie the show was intended to represent—Germany and Russia were soon at war with earth other. But politics notwithstanding, the show did bring together much of the region’s best art and provided a showcase for the short-lived Realist Movement and the emergence of the Modernist style.

A day trip to Turku allowed time for but a single meal: Lunch at the riverside restaurant:

We had two entrees here—one fish and one meat–both of which we enjoyed. The fish dish was a roasted whitefish fillet with spring onion sauce and new potatoes. The meat was two cuts of lamb—entrecote and rack—with thyme sauce and herbed potatoes. We had red and white blends from Australian winery, Peter Lehmann.