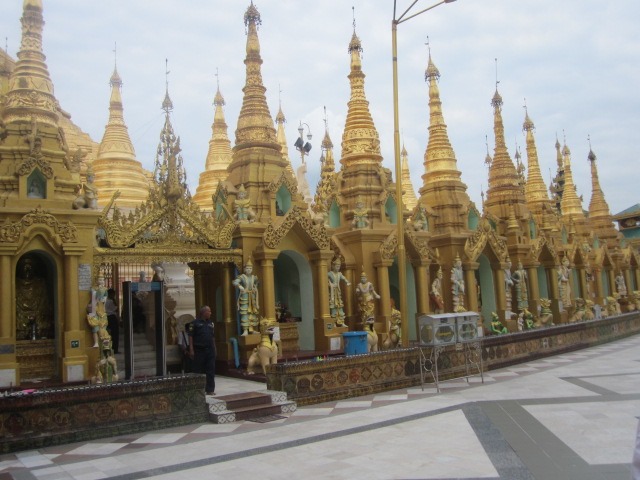 Myanmar, better remembered in the west by its colonial name of Burma, is emerging from a troubled past as a closed country under a repressive, brutal military government. Over the last few years, the country has made great progress in moving toward democracy, in opening the country to the modern world and in providing foreign visitors access to its incredible cultural treasures. True, the country still faces many challenges. These include, but are certainly not limited to:

Our short visit to Myanmar kept us well away from the most troubled regions, and unfortunately, from parts of the country we would have liked to visit, such as Mandalay and Inle Lake. But even though our visit was limited to the capital city of Yangon (formerly known as Rangoon) and to the cultural relic-rich Bagan, we still saw evidence of a country that faced many challenges in its bid to struggling to catch up with a troubled transition to a new world.

We also saw some amazing and incredibly beautiful cultural sights, a capital city with the potential of becoming one of the most beautiful in the world and people who seem to find a way to make a living–typically by finding something to sell.

Our first stop in the country was Yangon. After landing at the airport, we made a mistake of engaging with a van to take us to the hotel along with another passenger. Although we were assured that the van would leave immediately, after we paid our money we had a 25 minute wait for another passenger. Then the person had to finish her cigarette before we could leave. Arrogant. I probably don’t have to mention which western European country she came from.

Then we were on our way to drop off the first person which we were told was on our way to our hotel. 45 minutes later, the driver was still trying to find the monastery he was going to. The driver sideswiped a pole. No matter, he kept going. But he finally found the place and then got us to our hotel after a long delay due to traffic.

Yangon is dominated, both physically and culturally by the amazing, incredible, unbelievable (do you need more superlatives together the picture?) Scwedagon Paya (Pagoda) which is  set stop a hill just north of the Center of the city. This 326-foot, gold-plated central stupa was originally built as small cell in about 600 BC to house relics of four Buddhas. It was maintained and continually expanded and made more and more grand, reaching its current height in 1774. The Paya dominates a twelve acre platform that is laid out something like Borobudor Indonesia, with four smaller, but still moderately large stupas in each of the four cardinal directions plus multiple smaller ones surrounding the primary center stupa. Although its huge gold mass (a total of 1/2 ton of gold) is stunning enough, the top of the stupa is embedded with a king’s ransom of precious gems. Lotus petal leaves, for example, are covered in 13,000 plates of gold. The wind vane and flag poll are studded with 1,000 diamonds (278 carats) and 1,400 other jewels. It is all topped by a diamond orb encrusted with 4,550 diamonds 1,800 carats) and topped by one giant 76-carat diamond. Glad we don’t have the jewelry bill for that one.

The hilltop on which the stupa is built also has many other shrines, such as those representing other Buddhas, planetary posts, bell pavilions (containing 23- and 42-ton bells), a Chinese prayer pavilion with wood carvings, adoration halls, a shrine hall, several other religious sites, a photo gallery that provides historical shots plus close-ups of the bejeweled orb and a museum that was closed when we were there. The hill is also home to the well in which Buddha’s hairs was said to be washed before being embedded in the stupa, and banyan trees that are said to have been grown from cuttings of the tree under which the Buddha achieved enlightenment. OK, you need to have a lot of faith here….. 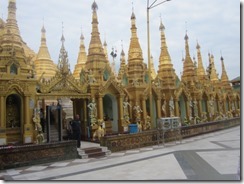 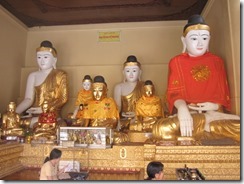 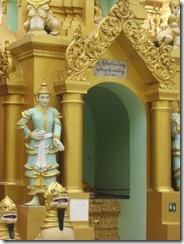 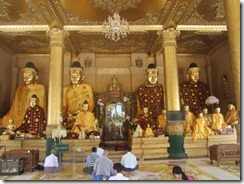 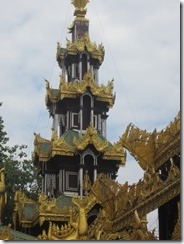 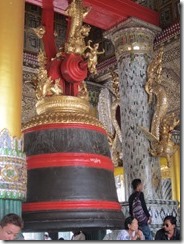 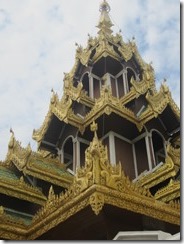 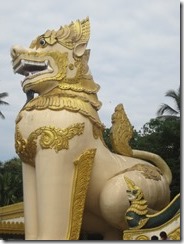 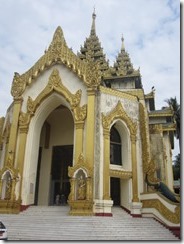 Although Scwedagon dominates the city’s landscape, it is just one of several large stupas. Additional ones were:

Other city stupas and religious sites include Botataung Paya, Maja Pasana Guya, Maha Wizaya Paya and dozens of others. Part of the nation”s patrimony is also preserved in a few museums. We visited the largest: National Museum, which  provides a visual, if not interpretive view of some of the country’s most impressive national, royal and religious artifacts from the 13th century to the present. Although labels are at best cursory and explanations sparse, the collection includes some beautiful objects of virtually all media. These include stone, wood and ivory carving, cast bronze, painting and lacquer ware. Among the more Impressive and interesting of the exhibits where those of the Lion Throne of the country’s last king, jeweled beds and palanquins, gold rugs and ivory chairs and all types of gold and jeweled royal paraphernalia. We also enjoyed the fourth floor exhibits on the clothes of Burma’s many native tribes and on locally made musical instruments.

Yangon, however, is about more then stupas and historic artifacts. It also has one of the more intact colonial downtown areas in the world. It, like downtown Havana, is loaded with colonial buildings that are greatly deteriorated, but not demolished or irrevocably damaged. Unlike Havana, however, Yangon’s city layout is a grid, its colonial buildings are British and renovation efforts have barely begun.

A few buildings, such as The Strand Hotel (where everybody who was anybody stayed in colonial times) and the Governor’s Residence Hotel have been beautifully restored. Others such City Hall, the former Rowe and Company department store, the Central Telegraph Office and the Law Courts are in various stages of restoration. Many other beautiful buildings have a long ways to go. Although the list is long, some, such as the Immigration Office, the Customs House, Myanmar General Hospital and especially the grand Myanmar Port Authority and the iconic High Courts Building, have incredible potential. 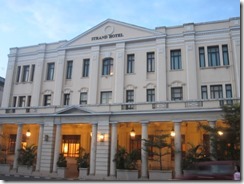 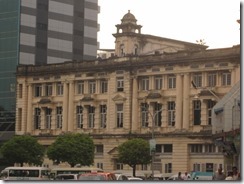 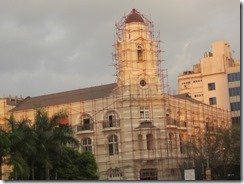 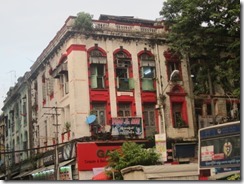 Most of the colonial buildings, however, must wait for their fates to be determined. It’s still uncertain whether they will be renovated (or if they are, with what type of historical integrity) or whether they will be destroyed in favor of the faster, less expensive approach of demolishing the old and building new from scratch. After half a century of stagnation, the country has to determine which of the many paths (economic, social, political and so forth, as well as architectural) it will take to development. And with astronomical cost of real estate and buildings (allegedly approaching San Francisco pricing) there will be a lot of commercial pressure to eliminate or severely limit historical renovation requirements.

There is, however, more to the city than temples and colonial buildings–for example, a number of parks. But while we saw a fair amount of green space, many were behind fences and locked gates and very devoid of people—after all, who can get behind the gates to get to the parks?

Instead of being in the parks, the people were all on the sidewalks and in the streets. Although the streets are loaded with shops, virtually all streets had another layer of stalls, tables or just blankets on the ground were somebody was selling something–anything you could ever want from clothes to home appliances, to personal care accessories to books (primarily photocopied and second hand) were available on the street. And this does even begin to get to food as every type of food is available from street vendors. But while stalls, tables–and even lights–are certainly helpful in hawking food, they’re not necessary, Around Chinatown in particular, we walked entire dark alleys that were filled, wall-to-wall with food vendors packed so tightly together that there were only narrow paths for walking among them. Most lacked tables and chairs and displayed and cooked their food in baskets and pans laid out on the street. Although some of the vendors brought battery-powered lights, many relied on much more basic lighting; using a single candle in the middle of each basket or pan to  illuminated their wares. 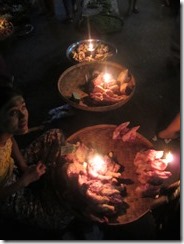 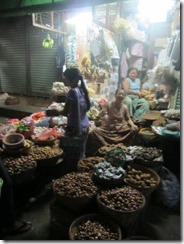 Those who weren’t walking the streets were driving or riding in them. Yangon traffic is as bad as that of Bangkok. A smaller scale perhaps, but no less time-consuming.

On other thing about Yangon. People—men and women—were buying pastes to put on their faces for sunscreen. No. Not sunscreen like we know it. This is a white substance that they wear with pride. Unfortunately we don’t have any pictures of it other than in our minds unfortunately. But they reminded us of war paint that the Indians used.

We stayed at Traders Hotel in Yangon. It was a great location and was a larger, more tourist-oriented hotel. We had to go through security—similar to what we ran into in Egypt of going through a metal detector and having our handbags and packages inspected–to get into the hotel. When we asked why, we were told that someone tried to set off a bomb in the hotel 2 weeks previous. OK, riskier than being in Egypt or NYC? Hummm. But once we passed through security, showed our key to get into the elevator, our room was very comfortable.

We only had one meal in Yangon. As we wanted to make the most of it, we tried to eat at where some friends had recommended—a French restaurant called Le Planteur. However we couldn’t get into it and instead chose Padomar which focused on Myanmar food. Tom chose an eight-course Myanmar tasting menu in which he was able to select many dishes from a list. Joyce selected an appetizer and an entree from the a la carte menu. We both chose well although Joyce’s were our two favorite dishes of the night. We enjoyed the pre-meal, the restaurant’s house-made tofu cracker, so much that we risked ruining our appetite by ordering another plate. (We discovered, on our way out, that other people must also enjoy them, since they are available by the box.) As for our meals, the shrimp and pennywort (a leafy herb) tempura with tamarind and jaggery sauce appetizer, and the pan-fried butterfish with tomato were our favorites. A couple of Tom’s dishes–talapaw (a Karen tribal soup with fish and an a subtlety earthy taste) and the chicken curry with potatoes (very mild as Myranmarians prefer their curries) were close behind. The huge, simply done shrimp salad was also delicious, although not really a culinary memory. The only misfire was a shrimp curry. While the mild yellow curry was good, the shrimp were dry and mealy. We both finished with fried banana with honey. While they were certainly delicious, although they, like the shrimp salad, are not the type of dishes on which you can rate a restaurant. Overall a restaurant we would wholeheartedly recommend for anyone looking for a taste of Myanmar.