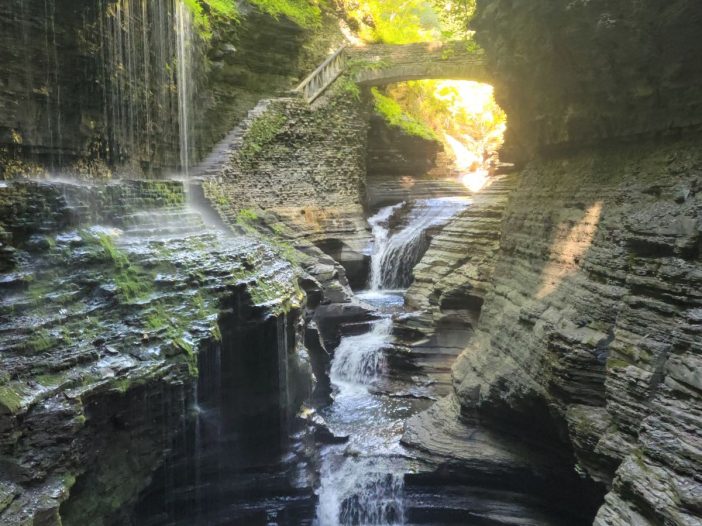 New York State’s Finger Lake region provides visitors with a lot of things to see and do. Whether tasting wine, participating in water activities, visiting the many small towns and villages, or just relaxing and taking in the view. And then there is one of our favorite activities: hiking or strolling through some of the gorges.

The Finger Lakes were originally rivers. When glaciers moved into the area during the ice age and gouged deep trenches into these river valleys. Then 10,000 years of rushing water continued to deepen the gorges. All makes for some awesome scenery no matter what the season. Here are some of our favorite gorges, waterfalls, views, and parks in the area.

Taughannock Falls plunges 215 feet past rocky cliffs that tower nearly 400 feet above the gorge. We hiked two of the park’s trails. We began with the steep (about 200 steps plus a number of additional uphill segments), 1.9 miles out and back, 180 foot elevation gain South Rim Trail. It offers pretty views down into and across the gorge to the cliffs on the other side. We then took the flat, easy, 1.5-mile out-and-back trip along the very low stream (which probably occupied only about half the mostly dry streambed) to the currently narrow 215 foot ribbon of water flowing from cliffs that are up to 400 feet above the floor of the gorge.

Cascadilla Gorge connects Cornell University’s campus with downtown Ithaca. We took the wonderful one-third-mile path that follows a fast-flowing stream 400 feet down through a moss and fern-shaded series of lovely cataracts. It is a fantastic urban retreat into another, more tranquil world. The downward walk is a piece of cake. The return upward trip requires much more work, although the scenery provides many great opportunities to take a break from the multiple long flights of steps.

This is a lovely tall cataract whose water flow was limited (albeit still pretty) in mid-June. While a falls-side trail was inviting, we passed the trail and just enjoyed what we could see from the park’s entrance.

With its location at the foot of Main Street, the falls serve as the focal point of the village of Montour Falls. Although the summer flow was limited during our 2022 visit, it made for another pretty sight.

Letchworth is known as the “Grand Canyon of the East”. It has one of the most dramatic gorges east of the Rockies. Formed by the Genesee River, the gorge is up to 600 feet deep in some places and has at least three major waterfalls. Although the park is laced by 66 miles of hiking trails, our one-day visit focused primarily on the Gorge Trail, especially the sections to and around the three imaginatively named waterfalls:

The gorge has 19 waterfalls over its two-mile length to explore via a number of trails. If you are not a hiker, the park has shuttle buses that can take you to the top of the gorge and back down. But for us, hiking is the way to really experience the beauty.

The 1.5-mile Gorge Trail includes 832 stairs and several bridges that allow you to explore the very different vegetation on each of the gorge’s two sides. The trail’s primary attractions, however, are the rushing water and the graceful curves the water has cut into the soft, primarily slate and sandstone rock face. The most dramatic of the falls have names: Central Cascade, Rainbow Falls, Cavern Cascade, Spiral Gorge, and so forth. However, you don’t have to know the names to appreciate the power of nature and the beauty that it can create.

In addition to the shuttle bus, hikers have several options for returning to the visitor center. You can return trip via the Gorge trail, or take trails along either of the gorge’s two rims via the South Rim or Indian Trails. We returned via the Indian Trail, a gradually declining trail through the forest with a few viewpoints down into the gorge. This gradual stroll ends with a several hundred-step staircase down to the park’s entrance.