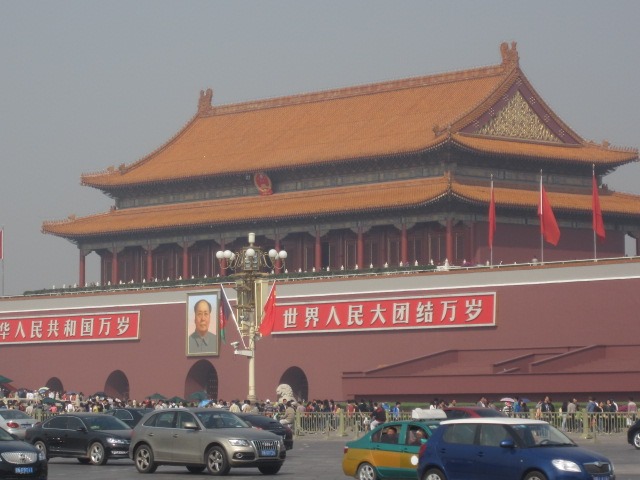 No trip to Beijing is complete without a trip to the Forbidden City, the Chinese imperial palace from the Ming Dynasty to the end of the Qing Dynasty.

Unlike the rest of Beijing, the Forbidden City has not changed from our last trip (other than for a huge, ongoing, decade-long restoration project), including Mao’s picture in a prominent spot outside  on the walls. The middle line, which contained the administrative offices, the royal residences and the Imperial gardens, remain the highlight: one section after another of halls, one more beautiful than the last. The gardens are beautiful, with their landscaping, lovely trees, scholar rocks, and even an amazing, artificial coral and limestone mountain topped by a tea house from which the emperor and his chosen concubine could gaze at the moon and stars. 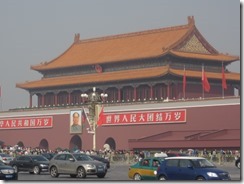 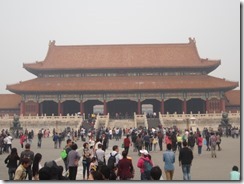 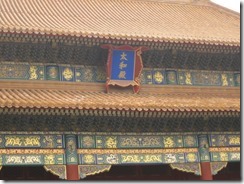 These concubines all lived in the east line, which, while built to a smaller, less ornate scale, is still beautiful. It now contains the Forbidden City’s galleries. One gallery is devoted to ceramics, one to calligraphy and printing. But two which are the most interesting to us are: 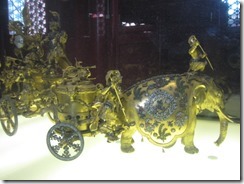 The entire complex took  over a million people working 14 years to complete. While we weren’t surprised by the total number of years, we were amazed that ten years were devoted to gathering the appropriate materials from around the country and that all the construction was completed in just four years.

Although the Forbidden City was pretty much as we remembered it, a couple of things absolutely have changed. First, the buildings in the central line are now closed to visitors. You can look inside, but cannot enter any of them. We count ourselves fortunately that we could go inside on our last trip. Second, as a means of improving security, visitors can only enter through one gate and must leave via one of two others. Third were the crowds. Luckily, we visited on a normal day, in which there were only about 30,000 visitors. Looking into every building required a wait. We were, however, lucky. If we had waited a couple days to the start of National week we may have had to wade through crowds of about 100,000 people.