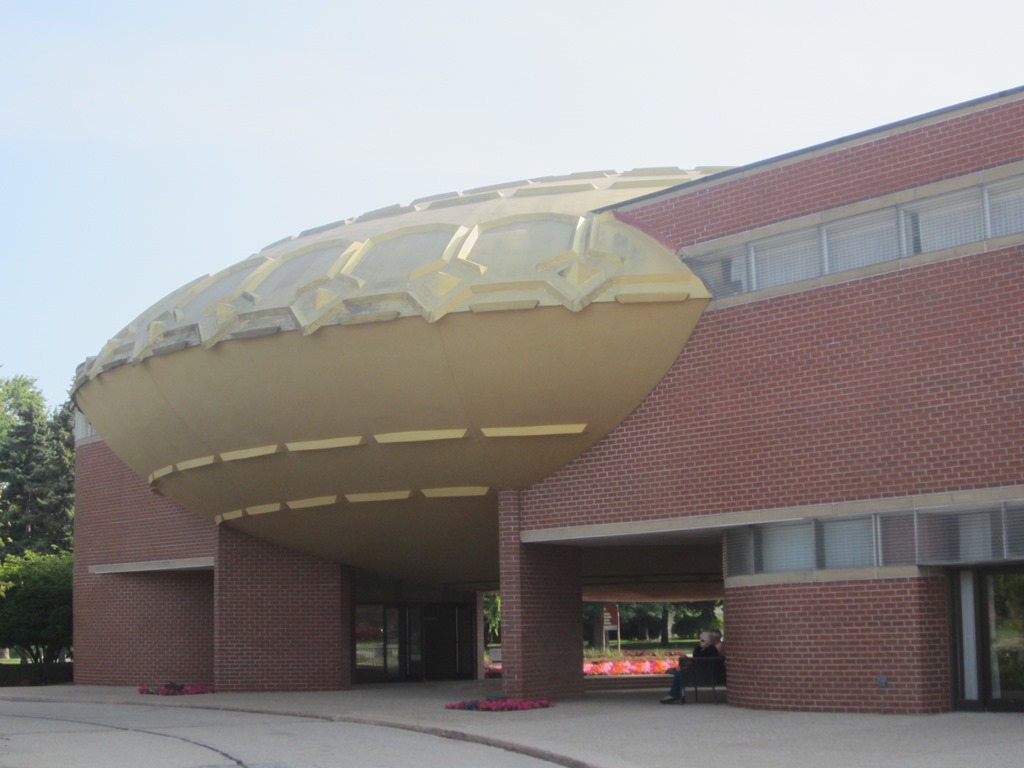 As you may remember from our 2012 Blog, A Morning in Oak Park with Frank Lloyd Wright, we are huge Frank Lloyd Wright (FLW) fans. So, when we read that not only had Wright’s legendary SC Johnson Administration Building in Racine, Wisconsin been opened for seasonal tours, but also that the newly renovated Wright­-designed Research Tower had been opened for the first time, we had no choice: We had to add an extra day to our annual Chicago visit for a 70 mile detour to Racine. We were rewarded not only by tours of these buildings, but also by those of: 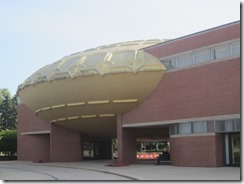 Meanwhile, back on the SC Johnson campus, the primary objective of the visit was a two-hour tour of the SC Johnson campus. After meeting our tour guide and getting a brief orientation at the Golden Rondelle, we were off to the glass-encircled 2010 Fortaleza Hall, which traces the legacy of the company. The building itself, with its glass and Kasota limestone façade, white-marble floor, living green wall and mosaic topographical map of the Western Hemisphere, is a piece of art. It also contains a corridor that serves as a visual timeline of the company’s history, displays of corporate memorabilia and products, and an exhibit hall that provides histories, pictures and Wright-designed furniture from the architect’s two Taliesin homes/schools (the original in Spring Green Wisconsin and Taliesin West in Scottsdale Arizona–both of which we had visited years ago), as well as his apartments in Tokyo (when he was working on the Imperial Hotel) and New York’s Plaza Hotel (when designing the Guggenheim Museum). 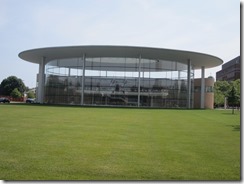 Wright left quite a legacy of building in Southern Wisconsin, including Taliesin, his primary Midwest residence and architectural school. The three buildings he built for the Johnson’s however, are among his masterworks.

This was the highlight of the tour. We had seen pictures of it before, but the pictures paled in comparison to the real thing (unfortunately, we weren’t allowed to attempt to capture the beauty with our own pictures). The iconic building, which was completed in 1939, was the progenitor of the modern open office. One enters it through a small, relatively plain, low vestibule which, in classic Wright fashion, opens to a dramatic, one-half acre, three-story central workroom that is bathed in natural light from clearstory windows and skylights made of 43 miles of Pyrex glass (since replaced with acrylic) rods. The highlights, in addition to the soaring space and the light, include:

The exterior repeats many of these themes, such as the Kasoda limestone walls, glass rods and a carport supported by columns that echo the shapes of those inside the building. 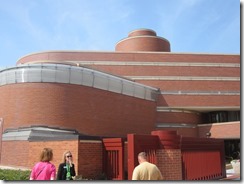 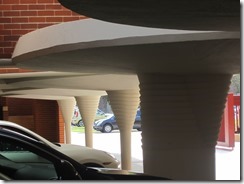 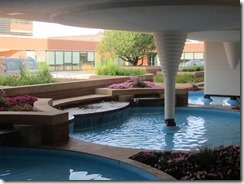 The 14-story, 153-foot Research Tower, which was completed in 1950, is built in red brick and surrounded with Pyrex glass tube windows. The newly restored building, of which two floors are furnished as they had been originally built and filled with historic instruments and memorabilia, is almost as elegant as the Administration Building. It is also, almost as innovative. For example, it is the tallest cantilevered building in the world, a 40-foot diameter building built atop a 13-foot core.

Unlike the Administration Building, however, it has not aged well. To fit onto the small base, the building was smaller than originally planned, accommodating only about six researchers per floor. The translucent windows, while not allowing inhabitants to view the outdoors, let in so much light, that many workers were forced to wear sunglasses. Wright, meanwhile, insisted on a circular-shaped elevator, despite the fact that scientists claimed that it would not allow them to transport required equipment among floors. And speaking of movement among floors, Wright also insisted on only a single, very narrow staircase, and refused to build a second one. This prevented the building from meeting subsequent, more stringent fire codes. As a result, the building was closed in 1982. 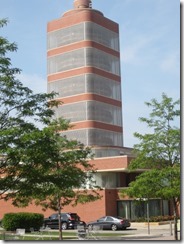 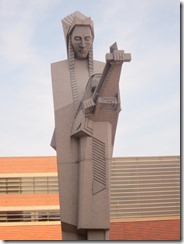 Wingspread was built in 1937 as the home of HF Johnson’s family. The 14,000 square foot, Prairie-style home, consisted of central living core, surrounded by four long wings that contained the master suite, children’s bedrooms, kitchen and servant quarters, and guest rooms. Like the SC Johnson buildings, it was built largely of Kasota limestone, red brick (in addition to cypress wood) and was lit from above by a layer of windows and numerous skylights. The large living room is built around a brick core that contains multiple (albeit less than practical) fireplaces and is topped with a glass tower that was mandated by the children . The children’s wing, which retains much of its original design, shows demonstrates classic Wright lines and flow between the inside spaces and the landscape. And, unlike the case with the SC Johnson buildings, visitors are able to take pictures of the home’s interior. 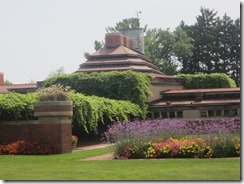 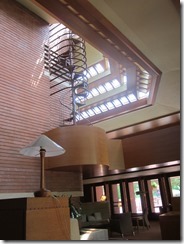 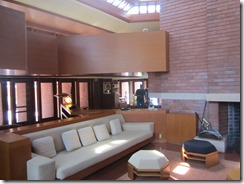 And then, for good measure, we got a roadside view of another Wright-designed home; this, a private home on Main Street that is not open to the public. 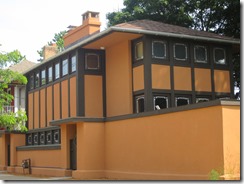 All these Wright-designed structures suffer from the same maladies of many of his other works: notoriously leaky ceilings, long construction delays, cost overruns that frequently double or triple (or in the case of the Administration Building, were six times) the projected costs, and an absolute insistence that everything be done exactly as Wright proposes. This stubbornness was evidenced in a couple stories about the residence of Wingspread. One was when HF Johnson, in the middle of a dinner party, called Wright to complain that the ceiling was leaking and was dripping water directly on his head. Wright’s characteristic response: “move your chair.” Then, years later, when Wright was an overnight guest at the home, he woke early and replaced all of HF’s second wife’s furnishings with those (then stored in closets) that he had originally intended. The wife reportedly threw him out, and forbade him from ever returning to the home.

But despite all the problems, the Johnsons called on Wright to design three landmark buildings and dedicated millions of dollars to preserving and lovingly restore them.