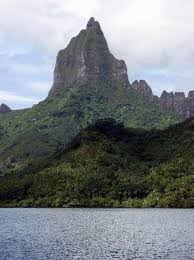 Our South Pacific trip begins in French Polynesia. This French Protectorate consists of 120 islands spread across 1.7 million square miles. Despite its size, it is home to only 270,000 residents. We limited our visit to three of its major islands: Moorea, Bora Bora and Tahito Nui—four if you count the latter’s appendage of Tahiti Iti.

From Los Angeles, we landed in Tahiti Nui’s (island’s) capital city of Papeete and hopped a ferry to our first resort, on the beautiful island of Moorea.

Although only about 30 minutes by fast ferry from Tahiti Nui, Moorea is a different world. The shore is lined by beaches and the island’s only “major” road, which is virtually the only inhabited part of the island. Most of the volcanic interior is extremely mountainous, with huge (up to 7,353 feet), beautiful, irregular mountains, including the practically vertical spire that the movie, South Pacific called Bali Hai. This being said, there are two valleys, running from the mouth of the island’s two major bays (one of which has the island’s only other (albeit quite short) paved road. These valleys are home to the islands plantations (primarily pineapples and coffee) and farms (fruits, vegetables and vanilla) that are the third leg (after tourism and fishing) of the island’s economy. 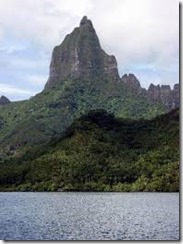 We, however, came to the island not for cities and towns, but for its incredible natural beauty and its snorkeling. It is also one of the primary sites at which people can snorkel with sharks and rays (which we are doing on several other islands this trip) and see Antarctic humpback whales in their mating and birthing grounds. (We will be snorkeling with these gentle giants on another island, later in this trip).

We stayed at the Intercontinental, the largest resort on the island, which is closest to two small motus (islands) that offer the island’s best snorkeling, and is home to two of the island’s attractions: 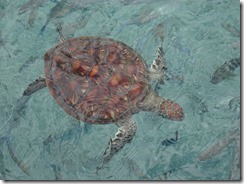 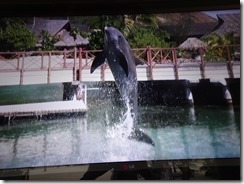 Snorkeling off the island’s northwest coast, between Hauru Point and a couple of small motus (island) was a pleasant, albeit less than exceptional experience. Our base for this excursion was a small, forested, pretty sand island that is undeveloped except for a few cooking stations and tables built by tour operators. The snorkeling itself was pleasant, but, other than for one significant treat, unremarkable. The scattered coral were unremarkable and had little color. Fish, while not especially plentiful, were moderately colorful. But, despite the modest coral and fish, the trip was made more than worthwhile by the presence of several moderately sized (roughly two-to-2.5 feet in diameter rays that began appearing from the moment we got off the boat. They were not only plentiful, but also totally oblivious to humans, swimming within inches of us and paying us no head, even when we stroked their soft, smooth skin.

Our second snorkeling venture, while only in the hotel’s own small, enclosed lagoon, lacked the rays. It, however, made up for this lack with somewhat more interesting coral (some small staghorn as well as the brain coral that we saw at the motu, and with somewhat more color (greens, yellows and even a little blue). Even more interesting were the range and colors of the fish: parrotfish, damselfish, angelfish, chiron, sergeant fish, Moorish idol, butterfish and even a few flutes. And while this small lagoon lacked rays, it was also home to hundreds of sea cumbers, some up to a foot in length, and spewing a sticky white stringy substance with disturbed. 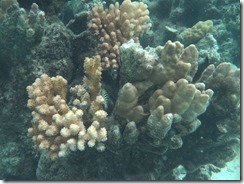 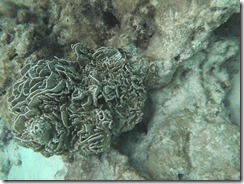 Around the island in Five Hours

Moreea is small enough that one could drive around the island in an hour. We dawdled, stopping for views, lunch, archeological sites, jam, juice and wine tastings, lunch and anything else we could find of marginal interest. Beginning from our resort (the Intercontinental) we headed west along the island loop road, making brief stops at: 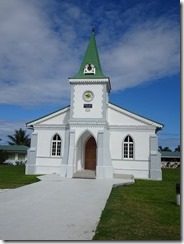 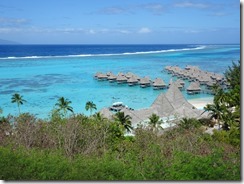 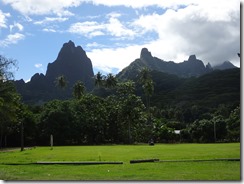 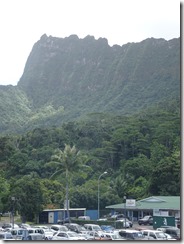 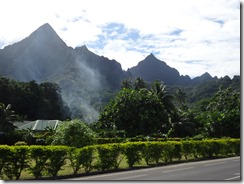 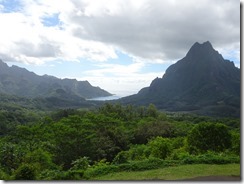 From there, we stopped at Snack Mahana for lunch (see the below restaurant section) and then back to our hotel for a relaxing swim and drink.

Fare Hana, where we began with the classic Tahitian dish of raw fish (in our case, tuna) marinated in lime juice and coconut milk, with shredded onion, carrot and cucumber. We followed this wonderful start with an even better dish: steamed parrotfish with prawns in coconut milk and Tahitian vanilla with small cubes of taro root—delicious! And since this was our first meal in Tahiti, we had this with a sinfully good tropical drink, a “Blue Lagoon” which combines vodka, blue curacao, coconut ice cream and pineapple juice.

The Shell, the Intercontinental’s premier restaurant, where our meal began with an amuse of lightly smoked salmon. We followed this with two nice dishes: An appetizer, which was almost the size of a self-respecting main, consisted of about two dozen snails in a cognac-flamed garlic cream sauce) was very rich, but quite tasty. The main was a large slice of tuna, cooked mi cui, topped with three lobes of sautéed foie gras, all atop a bed of risotto, and accompanied by steamed asparagus. While the dish was initially significantly overcooked, the replacement was prepared perfectly, and was quite good. These with a light-bodied, strawberry-like 2013 Faverley Mercurey. Quite good, albeit expensive. Although the manager was very good, the servers were less professional than we would expect from a restaurant of this quality and with these prices.

Tiahura, a casual, seafood-centric restaurant where we again split two dishes. We began with a combination of two forms of raw tuna. The thinly sliced Ahi sashimi, which was layered atop shredded cabbage, melted in our mouths like butter. The Ahi poke and Japanese seaweed, however, was quite salty for our tastes, although the salt was moderated by eating it with fish. We then shared another combo plate, this a fried red snapper (while the belly was good, the less meaty parts of the fish were dry) and a wonderful coconut yellow curry with lagoon clam (the type of large, manhole-sized clams that we so enjoyed snorkeling over in Australia’s Lizard Island lagoon). These were accompanied by rice, a very good steamed local banana, a dry piece of steamed breadfruit and an unusual and delicious coconut bread. This with a bottle of 2016 Chilean chardonnay from Tocornal.

Coco d’Isle, a casual, French-inspired place where we enjoyed the shrimp in vanilla sauce, but were disappointed with mahi mahi in coconut milk sauce with vanilla. And then there was the only white wine available, the 2016 Tocornal chardonnay, which appears to be Polynesia’s the island’s standard chardonnay.

Snack Mahana, an ultra-casual beachfront café that is frequented by locals, but was highly recommended by our concierge. We again split two dishes. Although the tuna marinated in coconut milk was quite disappointing after the wonderful dish at Fare Hana, the grilled mahi mahi was fresh off the boat, and delicious. We washed our meals down with a local Amber Ale (Hinano Brewing) and a chardonnay.

And for those who prefer to prepare their own ultra-fresh sashimi, tuna is universally available from road-side stands and grocery stores and is extraordinarily affordable at bargain prices of about $12 per kilo (the equivalent of about $5.25 per pound).

Intercontinental Resort. This resort had beautiful beaches, but the rooms could do with an upgrade. While it was comfortable and had a lot of pluses, it also had some minuses.

Bottom line, we’d probably stay here again as it is the top rated place on Moorea. But it would be nice if Intercontinental thought about updating the rooms and adding in more staff at checkin and at the concierge desk.