We had been to this lovely Western Illinois home town of Ulysses S. Grant briefly, once before. We made a brief return visit on our way to the Wisconsin Dells. Galena was a lead mining and transportation center on a tributary near the Mississippi. It was a boom town in the early 19th century, when Chicago was a small, swampy town. It faded in the middle of the century, as the surface lead deposits were exhausted and the Galena River had silted up. But it adapted as a local trading center. It retained its 19’th century buildings, including the 1826 Dowling town’s oldest building. 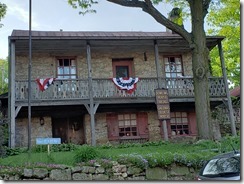 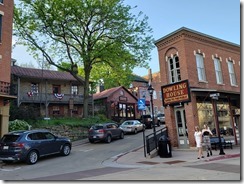 Most of the rest of the town center contains mid-19th-century brick buildings that have been refurbished as tourist stops. These include restaurants, boutiques, antique stores, specialty food stores, wine and cheese shops and even a micro-brewery (Galena Brewing), a craft distillery (Blaum Brothers Distilling) and two wineries( Massbach Ridge Winery and Galena Cellars) which make wines from a handful of local grapes (Chambourcin, Seyval Blanc, Seyval Blance, Marquette, Marechal, etc) and a few imported ones from New York, California, Oregon and Washington. We tried several at Galena Cellars where we found two somewhat interesting whites, the dry Illinois Seyval Blanc and the sweet Late Harvest Riesling.

After viewing the exterior of some of the city’s prettiest mid-19th century mansions (Washburne, Belvedere), we visited the Ulysses S. Grant Historic Site. The site contained a renovated neighborhood of mid-19th century homes and stores (along with a moved rural Western Illinois cabin) around the mansion the town built for Grant in recognition of his contributions as Commanding Union General. Grant, who moved to the town in 1860 to serve as a clerk in his father’s leather store (after unsuccessful attempts at other careers), returned to the city after the war and again in 1869 when he returned from the presidency. Grant, as we learned at the site, was far from Galena’s only contribution to the war’s general officer corps. It was, in fact, home to nine Civil War Generals. 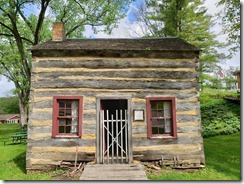 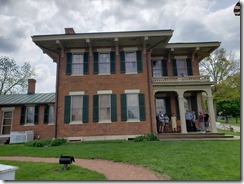 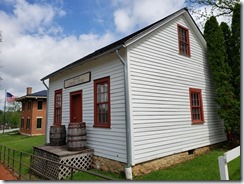 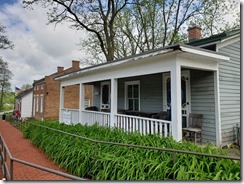 Our B&B host recommended that we eat at the Log Cabin. This place  serves huge volumes of quite good food. We couldn’t resist the Flaming saganaki and onion rings appetizers. Our entrees (grilled loin lamb chops and sautéed sea scallops) were both large and good and came with a choice of huge side dishes (of which we had salad and baked potato).

We were equally impressed during our brief stay at the nicely restored (mid-19th-century, of course) Alice Snyder’s House B&B. Our room was large and comfortable and had a private bath (down the hall so they supply a bathrobe).  This is on the corner of a very busy main street with cars and trucks streaming past 24 hours a day. If you can’t take street noise, this is not the place for you. But it didn’t bother us. Breakfast was a delicious three-course breakfast consisting of a strawberry crepe, a sausage quiche and apple.