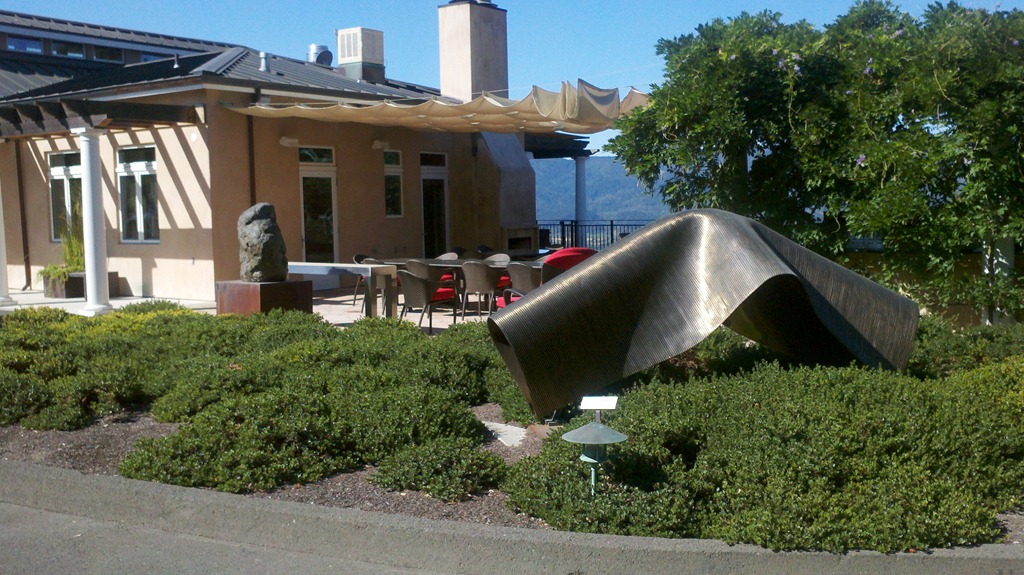 On a recent trip to Napa, we engaged in many memorable tastings, tried three restaurants to which we had never been and experienced two particularly fun, particularly educational events. And that was in one of our two and a half days in the valley. The educational events were the highlights of the trip. These were:

We have done tours and tastings at both of Hall’s properties—its LEEDS-certified St. Helena winery (the first LEEDS Gold-certified winery in California) and its much smaller, but much more intimate Rutherford property, which also houses a beautiful visitor’s center and one of the Hall’s own homes.

Both tours are fun and educational and both provide ample opportunities to taste Hall’s wonderful Cabernets and see part of the owners’ extensive art collection. The Rutherford property, however, is almost a piece of art in itself, with its design, postcard views and showcase for the art. Original creations line the garden and walls. The winery consists of custom-made tanks in mottled-stainless steel shells that reflect different colors of the rainbow. The caves were designed and built by an Austrian mason who used bricks recovered from across Austria (a country to which Kathryn Hall served as U.S. ambassador). And then there is a tasting room, with its beautiful custom-designed upside-down tree chandelier, in which each crystal “leaf” represents a day in Ms. Hall’s term as ambassador.

But for all the beauty, the attention is clearly on the vineyard, the winemaking philosophy and process and especially on the wine itself. We had a chance to taste two of the winery’s 2011 Sauvignon Blancs (Napa Valley and “T Bar T” Ranch), two cabs (2009 Napa Valley and 2008 “T Bar T” Ranch), one each of its Merlots (2008 Napa River Ranch) and Syrah blends ((2008 “Darwin” Red Wing). Although all (especially the Merlot and T Bar T cab) were enjoyable, they almost turned out to be warm-ups for the main act—a tasting of the newly released “Kathryn Hall”, a Bordeaux-style cuvee created from the winery’s best fruit.

What a wonderful way to begin a day in wine country.

We ended the day on a similarly high note.

We are also big fans of and have done tastings of a number of Joseph Phelps wines. But while we love the winery’s trademark Insignia Bordeaux-style blend, its $200 a bottle price tag is a bit beyond our typical wine budget. We were, therefore, thrilled with the opportunity to not just taste the most recent release (2008), but also to use juice from the vintages’ actual component grapes to create our own version of this very special wine.

After beginning with tastes of a couple Freestone Pinot’s on the patio, we headed inside. The seminar began as a normal wine tasting, with the educator reviewing the process for evaluating wines and then applying this process to a number of Phelps’ current offerings (2011 Sauvignon Blanc, 2010 Chardonnay, 2009 Freestone Pinot and 2009 Cabernet).

We then tasted and described wines made from each of the component grapes from which the 2008 Insignia was created:

We blended these five component wines to suit our own tastes. For me, that turned out to be 30% Suscol, 30% Barboza and Las Rocas and 10% Banca Dorada Cabs, 20% Merlot and 10% Petite Verdot. Unfortunately, the Stag’s Leap wine, which is normally one of my favorite source of cabs, was oxidized and not suitable for blending—at least not in my wine!

When we finished, we compared the fruits of our labors to those of Phelps’ own winemakers. While most of us enjoyed out own concoctions, we left with little doubt as to the identity of the real professionals.

Brief Return to a Few of our Favorite Wineries

While our morning tour and tasting and our afternoon tasting and blending experiences served as wonderful brackets to the day, Napa Valley offers too many other opportunities for us to settle for just two.

As difficult as it was, we managed to squeeze in brief tastings at three of our other favorite wineries–Duckhorn (especially for its single-vineyard merlots) and two Stags Leap leaders, Cliff Lede and Chimney Rock (focusing particularly on their reserve and single-vineyard cabs).

But as much as we would want it to be the case, man (nr woman) does not live by wine alone. And since there are so many new (or at least new to us) restaurants in the valley, we tried to at least sample three of the four on our list to which we had not yet been.

Catching Up with New Napa Restaurants

Unfortunately, after a five course dinner the previous night, and a large breakfast that morning, our restaurant stops were generally restricted to sampling appetizers. These tops included:

Based on our very limited experience, it wouldn’t be fare to attempt characterize, much less review the restaurants. While we weren’t bowled away by any of them, I am always a sucker for good bone marrow and the corn soup was also quite good. While none of the restaurants would top our to-return list (which is led by Kitchen Door, Morimoto, Oenatri in Napa and Ad Hoc, Bottega in Yountville, and Auberge de Soleil and Cindy’s Backstreet Kitchen in St. Helena),

Overall, a very full, very educational and very rewarding day. Needless to say, we slept well that night—and got off to a late start the next morning. All, however, for a good cause.

But no matter how worthwhile, days like this make it awfully tough to return to the office and get back to work.