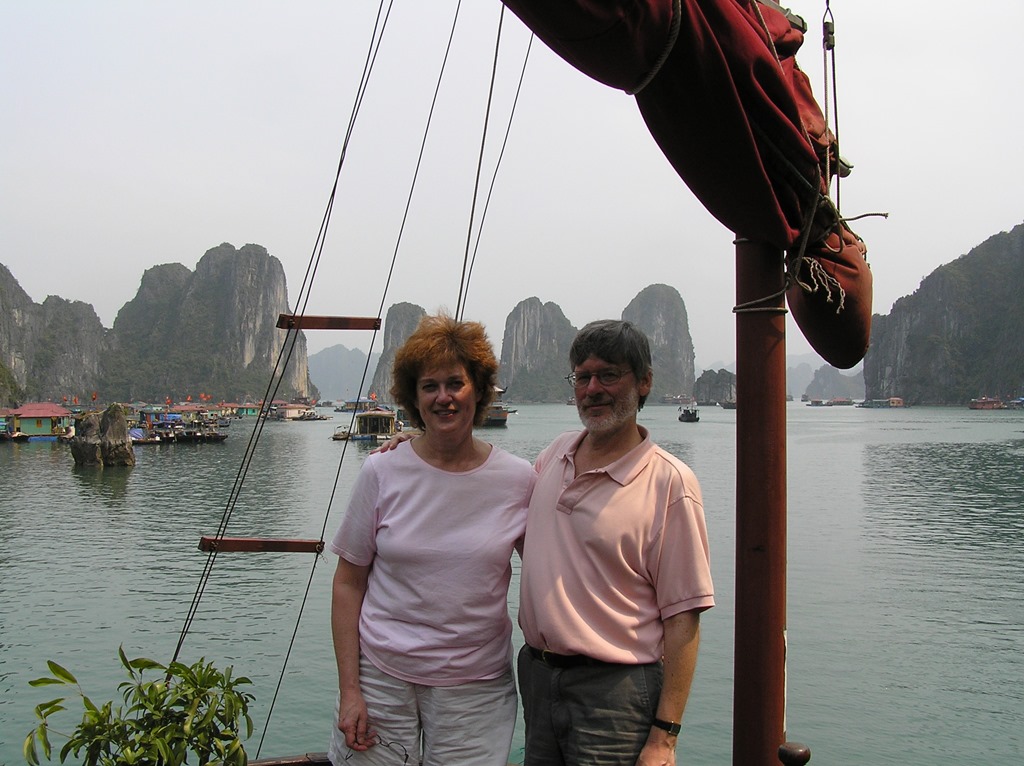 One of our favorite places in the world is Halong Bay, Vietnam. Majestic limestone karst formations, of all imaginable shapes, shooting out of the water and into the sky. A cruise around the bay yields an ever-changing panorama of 1,969 different islands. Every angle yields new surprises. And even the same scene looks very different in different light, especially at sunrise, sunset and dusk.

How things changed since we were last here ten years ago. Some of the changes were evident from before we even reached the water. The traffic was downright monstrous, with long lines of cars and buses coming and going from the area (a new highway is being built to hopefully help this issue). Then there was Halong City, a mere town when we were first here, which now sports a line of high rises and a model that shows future development plans. The small check-in booths for boat departures have been replaced by a large, modern terminal and ramshackle wooden docks of old have been replaced by long wharfs.

The wharfs are now so crowded that you no longer board your boat at the dock; you must now take a tender and board the boat from the smaller boat. And speaking of the boats, the old brown junks with two to four cabins apiece are gone—replaced by much larger white-painted boats. Our boat, the Poseidon, with eight cabins, is now one of the smallest. Most now have about 20 cabins apiece; the largest–40 cabins. Certainly more efficient, albeit somewhat less atmospheric. Here we are in 2005 and again in 2013. Yes, we are both thinner now, but also older. Here is what we saw in 2005: Note the boat colors and sails. 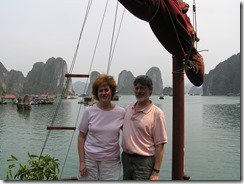 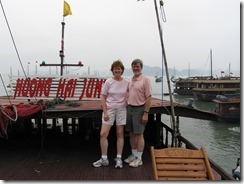 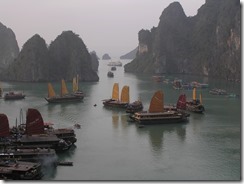 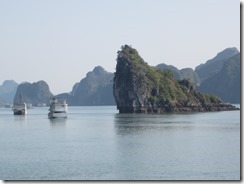 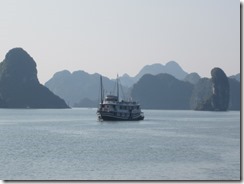 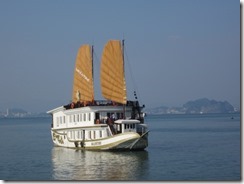 What do you do in Halong Bay? Mostly just sit on deck, with a bottle of beer or a glass of wine and be awed. 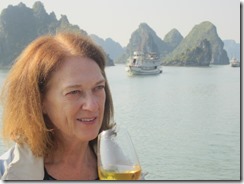 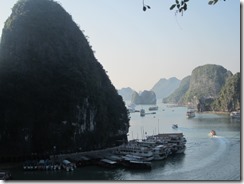 Our first day included about four hours of continually changing and continually beautiful views. But not everything is on the boat. Some trips offer stops at caves, such as the aptly named Amazing Cave, which has three separate caverns, each larger and more dramatic than the one before. And when you get to the end, you end up at an overlook with a wonderful view of the islands beneath. 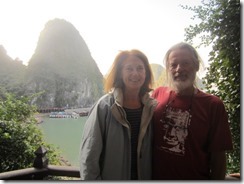 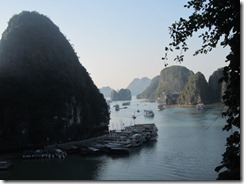 While it was a it too chilly for swimming, the weather was fine for kayaking around the islands, under the overhangs and up to the mouths of sea caves. Unfortunately, this trip did not provide the opportunity of our last trip to kayak through a very low sea cave, into Hang Luon, where one kayaks out of a dark, claustrophobic cave into a brilliantly lit pool of water surrounded by impossibly steep, 200-foot cliffs. But while we missed out on this spectacle, we did enjoy a wonderful sunset view over the water, between the islands. 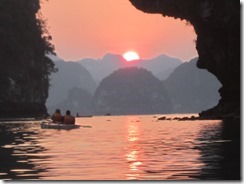 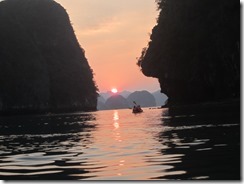 Then back to our boat for dinner, nighttime activities (calamari fishing was canceled since calamari don’t feed in cold water) and the standard karaoke option. As for our boat, the common areas were very nice. The top deck was all comfortable seating and lounge chairs and the poop deck had comfortable tables and chairs at which to have drink and a savor the views. The dining room, just the right size for 16 people, was functional and the meals quite good. The cabins–at least our cabin–was small and overcrowded with furniture, had a bed that was much smaller than we we led to expect (somewhere between double and Queen-size) and not particularly comfortable, in other words, much better for a day trip than for spending a night.

On day 2 we stayed on Cat Ba Island. The third day required a return to the real world (at least if you consider a vacation in Hanoi the real world). We boarded a morning boat for another three-hour cruise of a different part of the bay, passing dozens of other beautiful islands before arriving in Halong City, preparing for a long ride back to Hanoi. It turned out to be even longer than expected. Although connections among different boats, each going to different places on the bay were seamless, we couldn’t say the same for the bus that picked us up. While watching bus after bus come and leave for the city, our bus was an hour late and we were the last group picked up. Our obviously frustrated guide made call after call to locate the bus driver and find an ETA. This all taught us a valuable lesson: when someone tells you that something will take 10-15 minutes, it can be translated into “we have no idea”. Apparently, the bus driver comes when he decides he is ready, not when the bus is scheduled. It was a disappointing ending to an otherwise great trip. Shame on the bus driver. It was the second time in this part of our trip (the first time was in Cat Ba) that the bus driver seemed to call the shots and only appear when he was ready, not when he was scheduled.