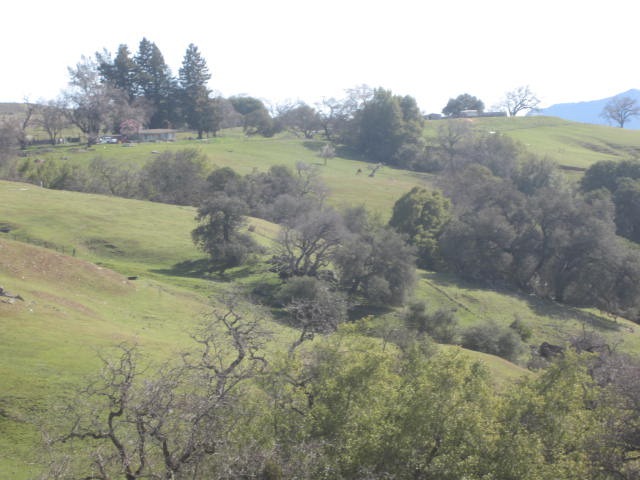 The weekend of February 23. Having partaken of a previous year’s mushroom weekend at Sea Ranch, we were up for another effort.

The primary focus of our activities was the Relish Culinary Center’s Wild Mushroom Foray & Sunday Brunch. About 25 participants met at a remote ranch deep in Anderson Valley at 9:00, for a roughly 2-hour mushroom forage with our expert guide, Elissa Rubin-Mahon. The ranch, which has lovely, scenic views over the valley, is reportedly filled with mushrooms after rainy periods. 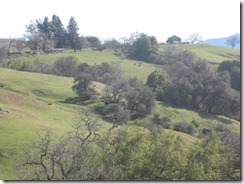 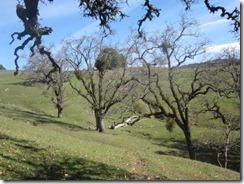 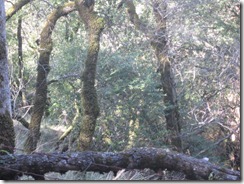 Unfortunately, the weekend took place during a long dry spell. Pickings were, at best, slim. We did manage to find a few samples (many of which dried out) of a few varieties, including Jack-o-Lantern, Puffball, Cortinarius and Amanita. Two, in particular, the bright orange-colored Witch’s Butter and the multi-colored Turkey Tail, were beautiful, albeit a bit shriveled and well past their viewing, much less their eating peak. 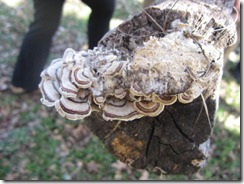 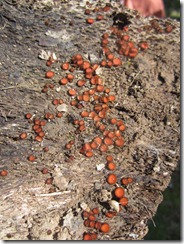 While a couple of the species were edible, Elissa told us that none of those we found were particularly tasty. The Puffball, in particular, is called the tofu of mushrooms, for its lack of taste and its propensity for picking up the flavor of other ingredients. A couple did have medicinal uses, one was used for dyes and one was even psychoactive. Others were non-edible, and mildly poisonous. 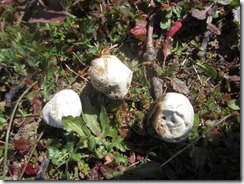 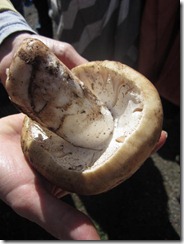 Among all two dozen people, there was nary a single mushroom that any of us could take home to eat. This is in sharp contrast to our previous forage along the much wetter, more humid Sonoma Coast, where Joyce and I went home with enough Golden Chanterelles for two delicious meals. 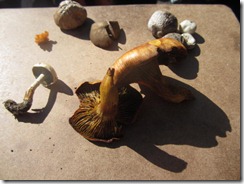 But, while our quest for edible mushrooms was generally a bust, we did learn a lot about mushrooms and foraging techniques. While our mushroom baskets may have left the event empty, this was not the case for our stomachs. After our bout with Mother Nature, we retreated to the culinary school where mimosas and a five-dish mushroom brunch awaited. The brunch, which began with candy cup mushroom scones with orange-honey marmalade (the latter of which was made by our multi-talented mushroom foraging guide). Then came a green salad with radicchio and roasted hedgehog mushrooms, a porcinio mushroom and sun-dried tomato frittata, roasted fingerling potatoes with pioppini mushrooms and the highlight of the meal—Candy cap bacon which took on the deep maple aroma and taste of the delicious mushroom.

The meal was accompanied by Elissa’s further discussion of mushrooms, this time accompanied with samples what we could look at, smell and touch, and pictures and explanations of dozens of other local varieties that, if we were there during more mushroom-friendly weather, we could pick on our own.

Relish, however, did give us hope for finding some of our own mushrooms with an over for us to join them free on another one of their forays.

By the end of the brunch, we were in a mushroom tasting mood. Luckily, a number of Sonoma County wineries were anxious to help, with their own Pinot and mushroom pairings.

We did not, unfortunately, have time to partake of the two most ambitious winery mushroom events:

We did, however, make it to a few other winery-sponsored pairings:

Overall, a decent combination of events—if only our foraging yielded some edible results. Although we will consider doing a couple events next year, we will probably wait ore the coast for another attempt at picking our own dinner.