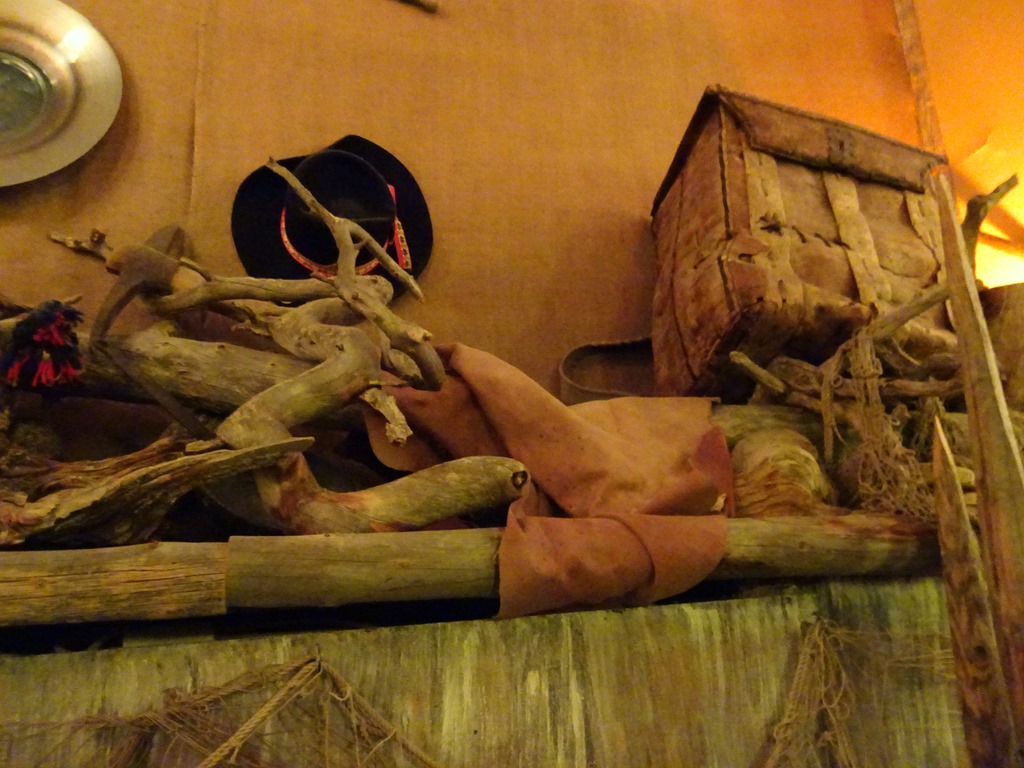 As always, we made it our mission to find the best of Helsinki restaurants. And we found some good ones!

This contemporary modern tapas restaurant offered a wide selection of small plates and three mains. The meal began with an amuse bouche of arctic char terrine with tapioca pearls and citrus cream. We then moved to four tapas, called Sapas. We particularly enjoyed the arctic char with onions and sunflower jam and the combination of horse meat with leaks and horseradish. Not far behind were willow grouse with blood pudding and birch sap gel and vendace (baby herring) with potato gratin. The main course was just as good: pike fillet with pike terrine served with cauliflower puree and farro with butter sauce. A sampling of four Finnish cheese was our next course. We particularly enjoyed two of them: Urtti Mouhijarui and Ullam Linin (not that the names will mean anything to us or that we will find them again). We had these with a 20015 Gruner Veltiner form Herrenholtz.

This Laplandic restaurant is rustically decorated with Lapland timber and brush wood, art, tools and stuffed Lap animal heads. The food, which is based on Lap ingredients, and service were both very good. We began with an amuse bouche of Arctic Char on toast, topped with tree-sap-flavored sour cream. We then treated ourselves to a sampler appetizer menu that includes about eight different dishes that included salt-cured whitefish with whitefish roe, salt-cured reindeer with cloudberry jam, brown bear meat, reindeer fillet, rose bay herb sprig with cranberry hollandaise, smoked vendace, steamed Lapland potatoes and salad. We both enjoyed most dishes, although neither of us were especially fond of the cured reindeer. Nor did Joyce enjoy the bear meat (although Tom did). Both main courses were excellent. 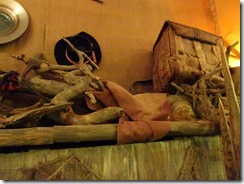 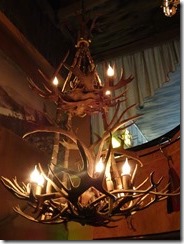 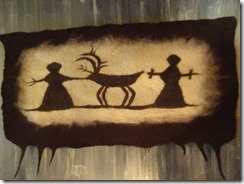 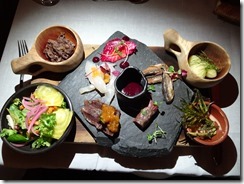 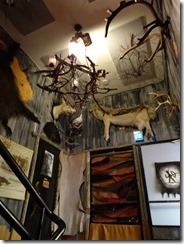 At this modern Norwegian restaurant, we opted for the four-course chef’s menu with paired wines. The meal began with beef tarter with brioche croutons that was quite good, despite being served with egg yolks that were a bit too cooked to permit full mixing into the beef. It went well with an Austrian red from the Zweigett grape. This was followed by a fish dish—a mild, flaky white fish with prawn, potato and a sauce of olive oil, tomatoes garlic, onion and capers. The wine was a white Marsanne and Roussane Rhone blend. The cheese course, with a French Savoy washed rind cow’s milk and an Italian goat were somewhat disappointing, even with a glass of 2011 Late Bottled port. The meal ended on a high note with blueberry sorbet with white chocolate mousse and white cake topped with blueberry milk and served with a sweet Austrian Auslese late harvest wine.

Although this was the only Michelin-starred restaurant we visited in the city, it was in some ways, our most disappointing experience. The food was actually quite innovative and quite good. Dishes included lightly-steamed zucchini with goat cheese, pumpkin seeds and fennel followed by a taste of tomato water with fennel oil; phyllo with egg yolk custard; perch/pike with mushroom ravioli topped with sep mushrooms and quinoa; beef tartare with vegetables, grains and crème fraiche. Intriguingly, each table was set with a pot filled with still rising dough, which was baked and served during dinner, along with some very nice spreads. Interesting approach. Our problem was with the service. The wait between courses (what we see as a drawback in many Scandinavian restaurants) was interminable, especially before and after the bread course. After many large, multi-course meals, we choose the shorter of the restaurant’s options—six dishes rather than ten). Our dishes came much more slowly than parties with ten and one such party even finished their meal before us. We actually felt the staff was penalizing us for ordering the shorter menu. Not what we expect from a Michelin-starred restaurant.

Kappelli is a very popular, very crowded restaurant in beautiful glass building in a strategic location. We were, therefore, very skeptical. Although service was very slow, we had targeted two dishes, both of which we enjoyed: Wild mushroom soup with truffle oil and elk meatball open face-sandwich with mushroom sauce, bacon, braised onions and lingon berries.

Our Helsinki Hotel was the Hotel Fabian. Hotel is very nice and the room was quite large. Sheets were comfortable and they had washcloths!. Towels were very thin however they had bathrobes which meant you really need the towels. Biggest issue, however, was the air conditioning. While they have it, we were told the unit was more for heat than air. We couldn’t get the room under 24 (76). They did unlock the windows for us and gave us a fan (the fan stopped working when we turnoff off the lights with the master switch at night. After a learning lesson the first night, we turned off the lights by hand). They are not used to warm weather and the ac is simply not worthy. We had similar issues in other Scandinavian countries, but this one was the worst as we could usually get the room down to 21 elsewhere.. Other than the AC, things were great. The staff is very helpful and knowledgeable. Breakfast was fine. Yes, no hot food as others have complained about but plenty of other things like cereal, bread, cold cuts, fresh-cut fruit, cheese, etc. And they did have oatmeal which is hot. We would have like a tea pot in our room so that we could make tea but read from another reviews that they charge for that so we went without. Location is about a 15 minute walk from the train station, 20 minutes from bus station and right near the market square. For us, it was perfect and very enjoyable.