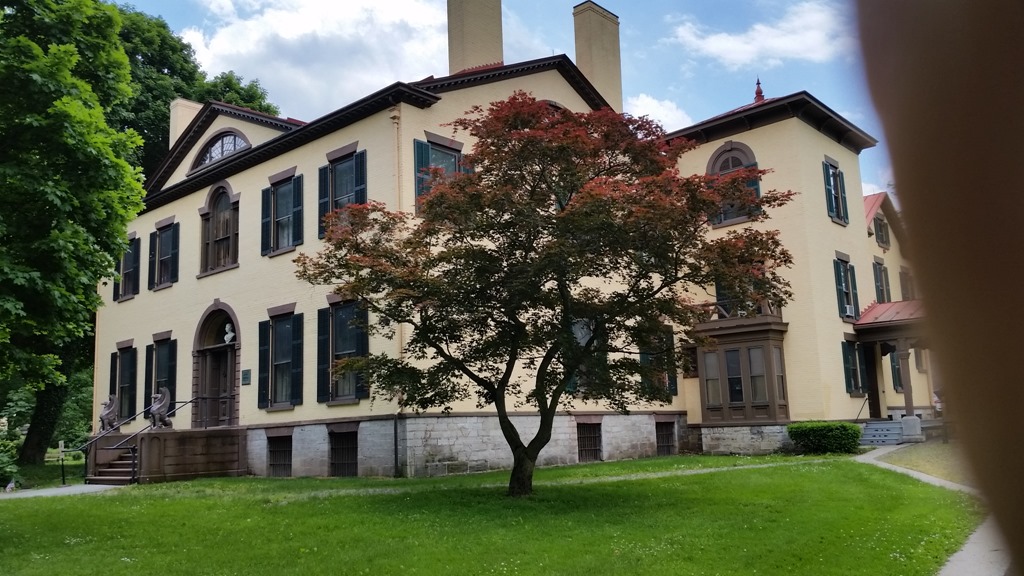 We grew up in Central New York (CNY), and lived there for 24 years. But for all our years living in there, it has taken several of our return trips to visit family for us to take advantage of many of the region’s attractions and cultural opportunities. We had visited some of these attractions when we had lived there, but explored them more fully on our return trips. Attractions such as:

Others attractions took return trips to even begin to explore; such as the:

And through them all, pretty (and in some cases, picture-perfect) towns with magnificent public buildings and homes that bear witness to many of these towns’ prosperous histories.

Our most recent trip added a few other sites in nearby towns that we had previously visited, but had not fully explored. And we did them all in an easy half-day road trip that began and ended with memorable comfort food and visits to one of Syracuse’s many weekly weekend summer festivals. And, if we had chosen, could have included one of the regular summer concerts.

This trip began with lunch in one of those nearby picture-perfect towns in and around which we had both spent considerable time, both separately in our youths and on subsequent return trips.

Skaneateles, a beautiful town picturesquely located at the head of the lovely, eponymous, crystal-clear, recreational lake that is lined with camps, luxury resorts and historical summer “cottages” (including one in which the Clintons spent one of their presidential summer vacations). Although our stop did include a mandatory walk through the historic downtown and along the lovely lakeshore park, the primary reason for our stop was to fortify ourselves for an afternoon of history at super-casual Doug’s Fish Fry, at which we enjoyed fried oysters, steamed clams, giant fried fish sandwich and onion rings—all perfectly cooked and tasty.

Auburn, a very well-preserved downtown whose main street (South Street) is lined with huge, beautiful, well-maintained mansions, including that of William Seward, who served as Governor of New York, U.S. Senator and one of the rival presidential contestants to and later, Secretary of State under, Abraham Lincoln (a tenure during which he closed the initially maligned (Seward’s Icebox), but later lauded deal of the century by purchasing Alaska from Russia.

Our visit, however, centered on another, less grand piece of land that Seward sold (for an absurdly low down-payment price, and with very low monthly payments—most of which he forgave) to Harriet Tubman.

This current site of the Harriet Tubman Home and Visitor Center provides, through a combination of interpretive panels and a presentation, the history of Tubman (initially named Armenta Roth by her slave-master owners). Born into slavery in Maryland’s Eastern Shore in 1822, Tubman was raised, almost fatally injured by an owner-inflicted head wound (from which she suffered a life-long case of temporal lobe epilepsy) and married to a free black man (although she remained a slave). After years of extra work that she intended to raise money with which to buy her freedom, the master who was willing to grant this freedom died. With her hopes for purchased freedom dashed, she and her brothers (but without her husband, who decided to remain in Maryland), escaped to the north. While her brothers subsequently returned to the more predictable life of slavery, Tubman returned briefly for another purpose—to help other members of her family escape to the north.

After escaping to Canada, she re-crossed the border to return to New York State where anti-slavery activist Lucretia Mott arranged an introduction to Seward–who sold her the land on which she built a home, pig farm and apple orchard, and on which she lived for 55 years until her death in 1913. Her story would have ended here, other than for the many trips that she (subject to recapture, a return to slavery, or more likely, torture and hanging) made back to the south.

She returned to slave country at least 13 times to help free slaves (about 100 of which are documented, and more are probable) and guide them on their journey along the informal, illegal, continually shifting “Underground Railway in which they spent days in secret basements and nights evading bounty hunters, until they reached freedom. For this feat, she earned the sobriquet, “The Moses of her People”. She also returned south during the civil war where she served as a cook, nurse, spy and guide for the Union army. She, in fact, prepared the last breakfast for the all-black Colonel Robert Gould Shaw regiment’s critical battle for Fort Wagner (as memorialized in the film, “Glory”).

More critically, she served as a spy and guide, including where she actually led a troop of men on a successful mission to free 800 people—all without a single casualty. For this feat, she was honored with another unofficial title, “General Tubman”.

Nor did her efforts for her people end after emancipation and the end of the civil war. While her original house burned, her second husband (of 19 years), a brick mason, built a new house. She then built another house on the property. This one, the John Brown (named in honor of the ill-fated abolitionist who was one of her heroes) for the Aged, in which she built a network of doctors, nurses and ministers to tend aged freed slaves. Tubman’s selfless life earned her the respect and friendship not only of the aforementioned Mott, Seward and Brown, but also of fellow abolitionists such as William Lloyd Garrison, Charles Sumner and Frederick Douglass. She eventually died at the age of 91. She was buried—with full military honors—at an Auburn cemetery.

Although her brick house is now closed for renovations, we were able to visit the refurbished John Brown house, which is now furnished with many of Tubman’s and her family’s furniture, pictures, china and other artifacts.

From there, we continued on to Seneca Falls, the subject of our next blog.