The Iceland Golden Circle is a circular route of 26 designated stops is the most popular introductions to Iceland’s amazing inland landscape, natural features and historic sites. Some of the natural highlights that we stopped at include:

Pingvellir is the heart of the rift valley between the Eurasian and North American tectonic plates. This rift is marked by a deep scar, along and through which runs a several kilometer trail. Some of the basalt walls are sheer and others rise in tiers, with lovely plateaus covered in green moss and occasional wildflowers. The top of the wall provides a dramatic view over the large, shallow, 84 square-kilometer Pingvallavatn Lake which is filled by underground glacial springs. Small ponds and bogs surround the lake.  It provides water for large surround stands of trees and bushes that, while we were there in the fall, were brilliant shades of yellow, orange and red. The lake’s water is 36-degree (Fahrenheit). It is a premier snorkeling and diving spot with underwater caves include lava rock pillars. 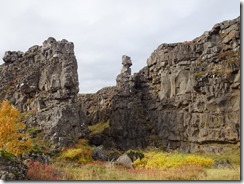 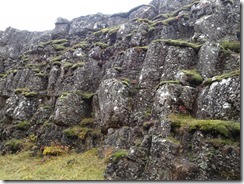 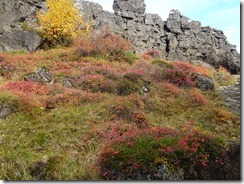 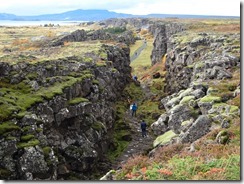 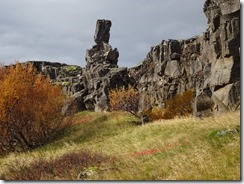 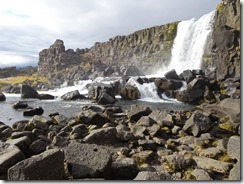 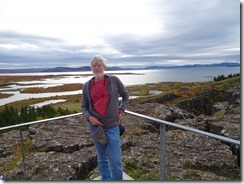 The area, rich in water and timber, served as a large ancient island crossroads. Here, Christianity came to the island in 1000 AD . The island’s first assembly was formed and began to meet for two weeks a year at the appropriately named “Law Rock”. Not only was this the foundation of the national government, it was also the first parliament in the world. 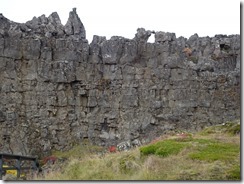 Kerid Crater was formed about 6,500 years ago. It was one of a chain of 12 volcanos, and one of the most distinct remaining one. It has a distinct 170-by-270-meter, oval-shaped, black- and red-tinged crater that looks down 55 meters into a crater lake that formed atop the volcano’s hardened, fallen lava cap. The water level rises and falls in accordance with the water table of the surrounding area. 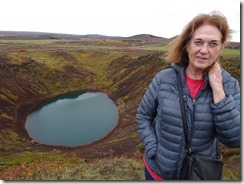 Geysir is the island’s hottest volcanic zone. The water heats up to 500 degrees Fahrenheit. A walking trail goes through fumaroles and hot springs. Strokkur a small, low-persistence geyser that erupts every five-to-ten minutes is a high point. It is a nice spot for an introduction to volcanic water features, but as we had recently been in Yellowstone, we were underwhelmed. 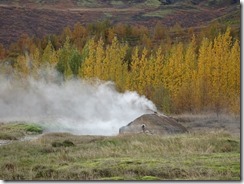 Iceland’s so-called “Golden Waterfall”, is the island’s largest and most dramatic falls. Although it falls only 31 meters (101 feet) in two stages (11 meters for the upper and 21 for the lower), it regularly channels about 110 public meters of water per second. The flow increases up to 2,000 meters per second at peak—through the 2.5-km long, 70-meter deep gorge. A massive flash flood created the gorge when it carved through a narrow strip of sedimentary rock in an otherwise volcanic basalt landscape. The veil of mist created by the lower falls plunging into the narrow gorge makes the falls even more dramatic You can view the falls from three angles—from the top and the base of the upper falls, and most dramatically, from the side of the lower falls which provides a full view of both cataracts. 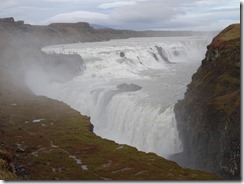 Iceland’s second-largest glacier at 950 sq km. It is visible at a distance from just past Gullfoss Falls. Unfortunately, you can only reach it with a 4WD vehicle

Hotel Gullfoss Brattholt, Tungufell. They call themselves a country resort hotel. It is a standalone hotel between the geyser and the falls. The rooms are quite comfortable. The only issue we had was the small window that opened did not let in sufficient cool night air so the room ran a little warm for us for sleeping. Breakfast had an assortment of breads, cereals, cheese, meat and some kind of eggs and bacon. The servers did not replenish the eggs and bacon while we were there so we could only guess at those.