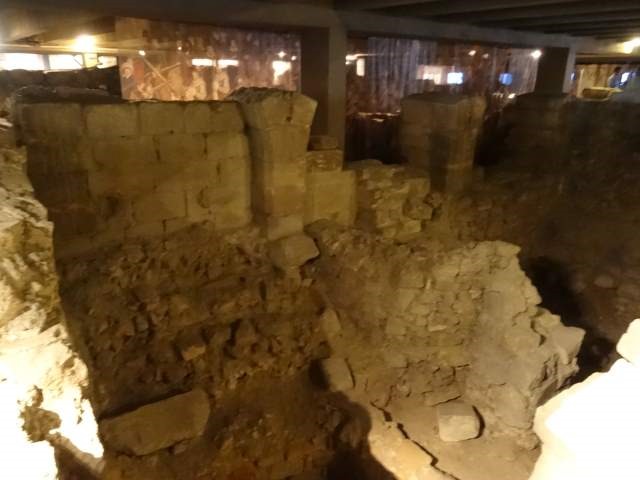 Paris has two noteworthy islands in the middle of the city. Île de la Cité, the first settled area of Paris, is still the most historic and one of the most monumental. Île Saint-Louis, right next door, is one of the most charming.

On this trip to Paris, we revisited a couple of our favorite sites on the islands, and explored three new ones—actually two of them were pretty ancient, but they were new to us.

The Archeological Crypt (under the Parvis de Notre-Dame de Paris). This spot on which Paris was first settled is loaded with history. The first and best place to learn about and to actually see remnants of its earliest history is in the site in which that history was created. The crypt displays, shows through 3D visualizations and explains this history from the 1st-century creation of the town of Lutetia, which began as a fortress and, over the next three centuries, grew into a 250 acre town, complete with a large forum and a covered amphitheater. While the town began to shrink and fall into disrepair in the 4th century, the Romans took over and rapidly enhanced and grew the city to about 200,000 people in the 1300s, by which time it was the largest city in and the main crossroads for trade across Europe. The crypt also details the stages of the 100-year (1163 through 1250) construction of the Notre Dame Cathedral, which is at the other end of the same plaza as the Crypt. An interesting presentation of the city’s ancient history. 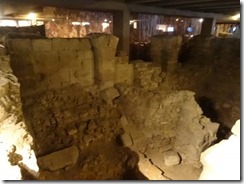 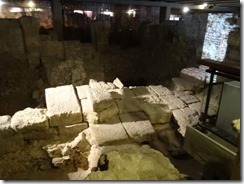 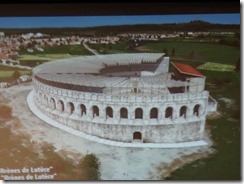 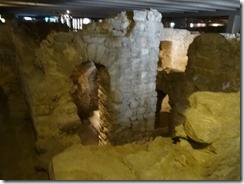 Sainte Chapelle. Although we had wanted to see this special 13th-century Gothic chapel of Louis IX for years, this is the first time we actually made it. It was worth the wait. Originally built to house two religious relics (a fragment of the true cross and Christ’s crown of thorns) that Louis bought from the Emperor of Constantinople, it became the primary place of worship for the King, his family and his court. While lower-ranking members of the court worshiped in the relatively plain downstairs chapel, the royal family, his high-level ministers and friends got to bask in the magnificence (not to speak of the light) of the upper chapel, with its 15, 50 foot-tall stained glass windows that depict 1,000 biblical scenes from Genesis to the Apocalypse. A truly extraordinary architectural and artistic achievement. 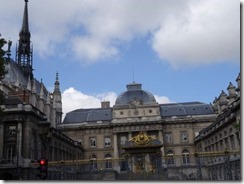 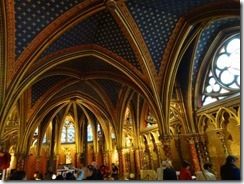 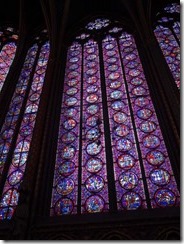 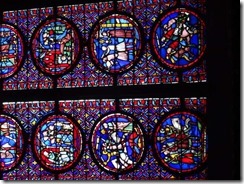 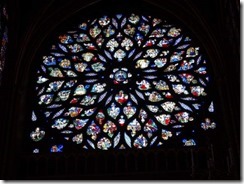 Notre Dame. We have visited Notre Dame on past trips. And Joyce even went to a midnight mass there one Christmas with her friends. Although we planned to at least take a walk through the magnificent cathedral, nothing would persuade us to wait in the incredible lines. And, since we had just been through the cathedral on our last visit, we decided to make do with a view of the magnificent exterior, with its incredible carvings, its gargoyles and its 50-foot long flying buttresses. We may stop by another time this trip: but certainly not with these lines. 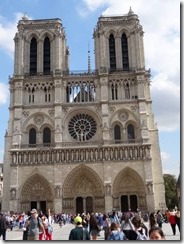 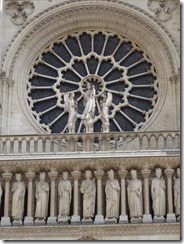 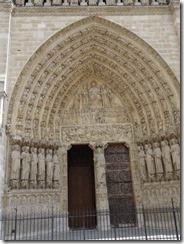 Holocaust Memorial (Mémorial des Martyrs de la Déportation). In all our visits to the island, we had never before known about this memorial. A pretty park overlooking the river, with a sunken plaza housing a building with 200,000 tiny LED bulbs—one for each of the roughly 200,000 French citizens that died in Nazi concentration camps. A very poignant memorial. 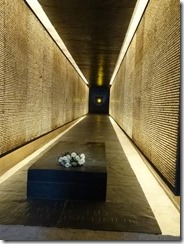 We have often viewed, but have never visited this beautifully-turreted tower that, from the 14th-century, served as a prison, especially those who had an appointment with the guillotine. “Guests” ranged from royals and royal consorts such as Marie Antoinette and Madame Du Barry, to revolutionaries like Robespierre and Danton.

Not much in the way of historical or particularly noteworthy sights, but always it is always fun to walk on this island, with its charming main street, lined with shops, restaurants and multi-story walk-up residences. And don’t forget the island’s primary culinary delight—Berthillon ice cream!

Although we knew a fair amount of the history of the islands—especially Île de la Cité, we decided on a refresher with a Paris Walks tour and got a brief overview of the islands’ histories

We spent much of the tour of Île Saint-Louis looking at and learning about the Hotel Particulares. These private mansions (not hotels) are relatively plain outside with unadorned limestone, with wrought-iron balconies, but are lavish and ornate on the inside. But unlike the other mansions of the era, the focus and formal rooms of these structures were to the outside—overlooking the river—rather than to the inside, overlooking courtyards. 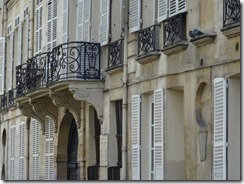 And, we heard some of the stories of some of the island’s residence, such as Camille Claudel, a sculptor who was a premier understudy of, and had a relationship with Rodin, at least until Rodin rejected her in favor of his older mistress (a rejection that Claudel cataloged in her sculpture, The Imploring Woman). Although she experienced some success in her profession, she ended up spending most of her life in an asylum. 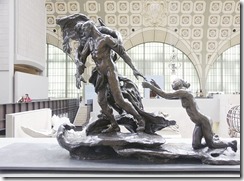 By the 19th century, the islands had fallen out of fashion. Mansions divided into small apartments and the area attracted artists and other lower-income residents. This began to change in the 1920s when the city began to refurbish some of the buildings (using them to host dignitaries) and especially around mid-century when tiny apartments were rebuilt into high-end, and increasingly desirable apartments and condos that, according to our guide, now sell for about 8,000-10,000 euros per square meter (approximately 10 square feet—similar to the cost in mid-range San Francisco neighborhoods).

We spent the last half hour of our two hour tour on bridges admiring the views of the surrounding area and on Île de la Cité, where we visited narrow alleys and the pretty, ivy-clad buildings of Rue Chanonesse, which, according to our guide, look similar to streets of the 17th and 18th centuries. 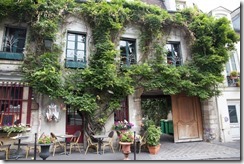 We ended up by the Notre Dame cathedral—discussing how the revolutionary architectural techniques of when it was built (from 1163 – 1250), such as the use of external pillars and flying buttresses, permitted the creation of large interiors without pillars and tall, non-load-bearing walls that could accommodate huge stained-glass windows that were not only beautiful, but also let in light to brightened the interior. Even the gargoyles served an architectural purpose, by channeling rainwater away from the walls and the foundation. We learned the history of the original bells (taken during the revolution to be transformed into cannons), how they were replaced by Napoleon III (on the cheap) and then upgraded on the cathedral’s 850 birthday. We learned of the less than period–correct renovation of the cathedral and how the heads on the row of kings’ statues were replaced after they were  “beheaded” during the revolution (and later found buried, after which they were resurrected in the Musee Cluny). 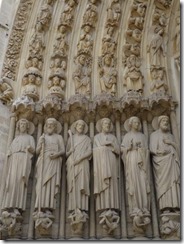 During our stay in Paris, we ate at two restaurants on the Islands:

A friend highly recommended this brasserie. Judging from the menu and the dishes of many of the people around us, it specializes in Alsatian fare. We, however, went classic Parisian. Tom had a perfectly cooked (rare) and very tasty entrecote. Joyce had what is probably the lightest, fluffiest and one of the tastiest ham and cheese omelets either of us ever ate. And both dishes, for the first time since we arrived in France a month ago, came with some welcome (although not too often) French fries

We had two dishes here. Joyce had an okay, but greatly overpriced salmon tartare with soy sauce and sesame seeds. Tom had frog legs sautéed in garlic and parsley butter. Pretty good, but not as good as the half-bottle of Chablis.