We have visited many dunes areas: from Cape Cod and the Indiana and Michigan dunes, to the desserts of Northern Africa and the Middle East. However, we never got a complete explanation of how dunes were created and how they evolve. That changed when we stopped at the Indiana Dunes.

We explored a small segment of the 15,000 acre Indiana Dunes National Lakeshore. The landscape and ecosystem changes dramatically as you move from the inland portion of the park toward the lakeshore. While the back dunes have generally stabilized by an accumulation of soil and vegetation, the front range consists largely of continually shifting 100-plus foot mountains of pure white sand. They lead to the beach and the lovely southern Lake Michigan shoreline.

One of the most interesting trails we took was the Succession Trail. Between the trails and the national parks interactive trail guide  (Apple or Android.) the trail gave us a much better understanding of how dunes forms. 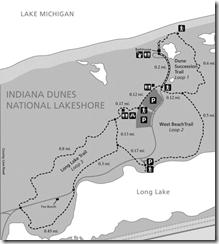 The succession trail is a self-guided walking tour of the dunes’ history. University of Chicago Professor Chandler Cowles originally crafted the succession story. The trail (and story told by the guide) goes through the stages of dune development.

In general, the dunes began 25 million years ago, at the beginning of the planet’s most recent ice age, when the area was covered by glaciers that gradually grew to 2.5 miles in depth. When they melted about 10,000 years ago, they left huge indentations in the land and vast quantities of boulders, pebbles and sand that the glaciers had cleaved from the rock through which it flowed. The depressions filled with the melting waters (filling what are now the Great Lakes) and the sand was gradually washed onto the shores by unrelenting waves and especially by fierce winter storms. This sand, which has added more than a mile to the south and eastern coasts of Lake Michigan over the last few thousand years, continues to accumulate today.

The succession trail and story begins on the beach. The waves continually wash ever more sand, not to speak of trash and vast quantities of microscopic plant and animal debris onto the shore where it accumulates in the sand ridges formed by the waves. 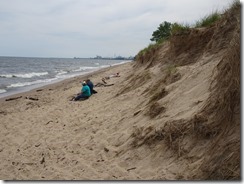 This debris enriches the sand with soil that provides food for foraging birds and animals. The animals and the wind carry and deposit seeds from inland plants onto the shores. The nutrients nourish the most salt-water resilient of these so-called “first-line” plants, which catch and pile sand that gradually form a line of long, narrow “foredunes”. As you walk up these dunes, larger plants, typically marram grass, begin to take hold. This hardy grass can survive the high winds. It is continually covered by new sand, which effectively builds larger dunes by creating networks of jointed, underground stems that can spread more than 20 feet in all directions. The interlocking network created from stems from multiple plants stabilize the dune.

As more nutrients accumulate, new plants, particularly cottonwood trees begin to take root in lower, more sheltered areas of the dune. While these plants may grow to only a few feet above the dune’s surface, their roots may reach 60 feet beneath the surface. Jack pines then take root and a range of smaller, mostly ground-hugging plants, such as bearberries begin to grow beneath the pine’s sheltering branches. 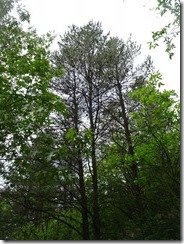 This progression continues over centuries and millennia with other plants, including black oak, hickory, ash and other trees taking root and creating evermore sheltered canopies. These larger, more varied understories (including sassafras, dogwood and witch hazel shrubs) shelter the ground from intense summer heat. Temperatures, which may be 10 degrees less than surrounding areas, creates habitats for new species of animals.

Depressions in and between dunes, meanwhile, accumulate water during rainy seasons. These “intermittent ponds”, which grow in rainy seasons, and especially in spring, typically dry out in the summer. This water, combined with winds, may carve channels that are deep enough to reach the water table, which may allow the intermittent pond to become permanent, or at least to remain damp. Such regular, much less perpetual areas of water (or at least moisture) create new plant and animal ecosystems. 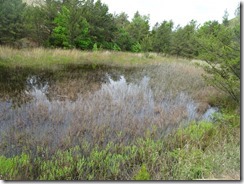 In normal conditions, this progression usually continues as the newly populated dunes recede further inland (as new shore is created) and as plant and animal populations stabilize.

The succession process, however, can be reversed. Winds, for example, may also create deep depressions which, when carved by particularly intense winds or human activity, create deep-sided valleys, called “blowouts” which effectively reverse the succession process by destroying dunes. Humans can also destroy dunes in more dramatic ways. The Succession Trail ends at a large, unnaturally flat area that was once homes to large, mature, rolling dunes. 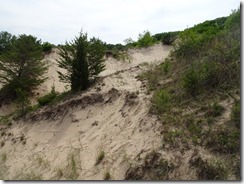 (The park continues through two additional loop trails, each of which demonstrates different aspects of the dune area ecosystem: Long Lake a permanent interdunal pond and the West Beach Trail, a walk through the mined area which has become an arid, desert-like environment in which cactus now grows, and a small area in which the wind has begun to create a few small, new dunes.

Growing Midwest cities, however, required sand. They needed sand  to make concrete. And the growing populations required conveniences such as glass jars, drinking classes, windows—and much more recently, silicon chips. All of these conveniences used sand. By the 19th-century, sandminers leveled several dunes to fuel growing population needs. In just a few years, they reversed millennia of dunes succession. Indiana slowed the devastation when it created a state park in the dunes area.

Then, in the early 1960s, a large steel plant bought 1,200 acres of dune land just east to the park and petitioned the Federal government to build a deep water port for shipping its steel to through the Great Lakes. This prompted a huge conservation movement which found a champion in Illinois Senator Paul Douglass. He helped craft a compromise by which the government granted approval for the port in return for designating a 15,000 acre slice of the dunes as the nation’s first National Lakefront.