While not quite as awesome as the Glacier Express, the train in the Swiss Alps from Zermatt to Interlaken was pretty darn awesome nonetheless. Surrounded by sheer, near-vertical, scree-strewn cliff sides and impossibly-shaped mountain peaks, we passed through a series of pretty towns in deep valleys and occasional grazing sheep and remote, aged, shepherd cottages with moss-covered slate roofs.

The views are wonderful when you are not passing through one of the many tunnels (one of which the train passes for more than ten minutes). Our train went through Spiez, a town on Lake Thun (the easternmost of Interlaken’s two lakes). After skirting the lake for roughly 20 minutes, we reached Interlaken.

Interlaken is the very touristy, central transit point for the Bernese Oberland region of the Swiss Alps. The area consists of four high-altitude valleys and three of the Alps’ tallest peaks—the Eiger, the Monch, and the Jungfrau—each over 13,000 feet. The Oberland region is one of the country’s primary winter sports areas. It is served by more than 45 mountain railways, cable cars, chair lifts and gondolas, many of which lead to incredible hikes and knock-your-socks-off views.

As its name suggests, Interlaken is located between two lakes (Thun and Brianz) and is at the foot of the Jungfrau massif. It was founded in the 13th century and is growing into the area’s largest city and primary transit hub. As a large resort city, it has several large resort hotels but also has a small, but pretty Old Town Area.

You can explore the area taking a cog-railway to a viewing station of the surrounding mountains and lakes at Harder Kulm (which also has a restaurant), or you can take a cruise along the shores of both lakes. You can also paraglide in one of the paragliding capitals of Europe. Paragliders take off from the 3,940-foot cliff atop Beatenburg and land 15-20 minutes later in downtown Interlaken’s Hohematte Park. 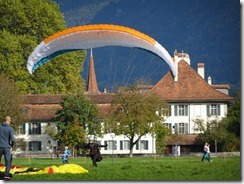 For those who prefer more static pursuits, the city offers shopping and gambling at the pretty casino.

We stayed at the Hotel du Nord, a short walk from the train station (Ost. The West train station was still walkable but further away) and on the side of the large park (where the paragliders land). It is a short walk from all of the main restaurants and shops. Upon checking in, we received free bus transportation within the town. In our room, we were given a free canvas bag that we could take with us. Everything in the small refrigerator was free (basically water and soda). Our room window had a great view of the town and we enjoyed the sounds of the city. The bed was very comfortable and the bathroom fairly large. Breakfast has a choice of a buffet plus hot items cooked to order. The staff was very helpful. We ran into a small glitch when we asked them to store our luggage while we took an overnight trip to a nearby town. (We were staying at the hotel both before and after the trip). They told us that they do not store luggage overnight. After a short conversation, they took our luggage without a further issue.