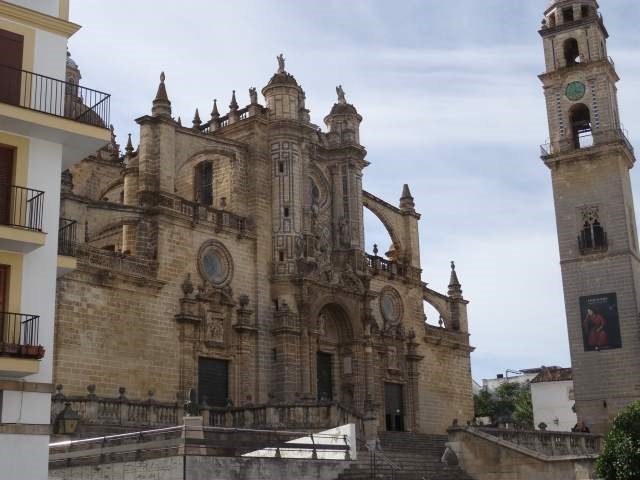 While we were in Cadiz Spain, we took a day trip to Jerez. Tom wanted to explore sherry and Joyce humored him (Joyce hates sherry). We took a train from Cadiz to Jerez De La Frontera and found a pretty town and has a number of historic sites. Jerez has a scenic Old Town, with whitewashed houses lining narrow alleys and lanes.

The primary sights in the center of the city include the cathedral, Alcazar, central square and Placio del Tiempo, which houses the largest clock museum in Europe. Just as lovely, however, are the whitewashed buildings that line the narrow, winding alleys and streets. Further out is the Real Escuela Andaluza de Artes Ecuestre, one of the best known equestrian schools in Europe. 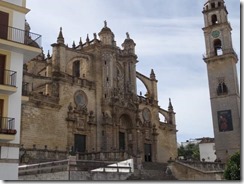 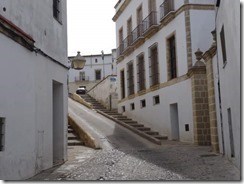 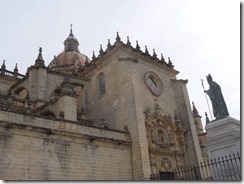 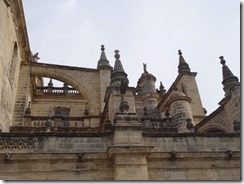 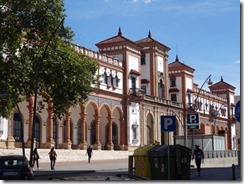 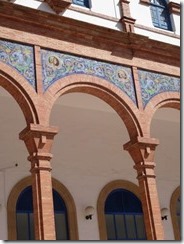 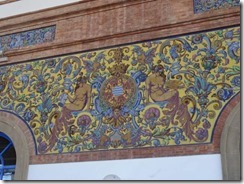 Although we unfortunately missed the two days per week when the school stages public displays of horsemanship, I had one overarching motivation for visiting Jerez: to tour a sherry bodega and to engage in some serious tastings.

We began our sherry exploration with a tour and tasting at Gonzles Byass’ Tio Pepe, where we explored the lovely vine-shaded alleys and resultant sun-dappled, whitewashed buildings and learned the bodega’s:

We even learned about (but did not see) the bodega’s pet mice, who developed a taste for sweet Oloroso sherry and how the bodega now puts out a glass of Oloroso, with a ladder for the mice to climb to the top, to take an occasional drink.

Then after going through a collection of special barrels, those dedicated to royal and celebrity guests and a special aging cellar for particularly distinguished wines, we made an unfortunately all-too brief stop at the tasting room, were Tom tasted four different sherries:

Although Tom used to enjoy Fino sherries, he now tends toward the deeper tastes of Amatadillo. And he enjoyed the Vina AB, at least until he experienced the rich, concentrated tastes of the extraordinary Del Duque—an amazing sherry. Although he doesn’t often drink Oloroso, he does appreciate it: and  appreciates it even more after the wonderful Matusalem Cream. NOTE TO JOYCE: The same thing after we visited Scotland and scotches, which prompted Tom to start drinking more expensive ones. Keep him away from learning about better sherries. 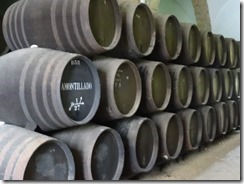 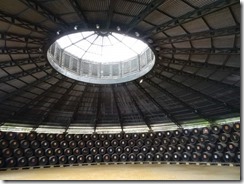 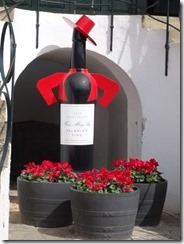 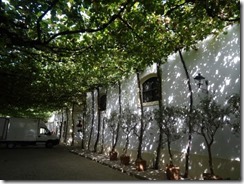 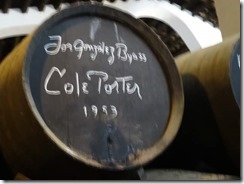 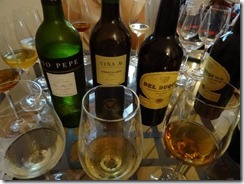 From there, we were were off to Fundidor Pedro Domecq, a Suntory-owned company that combines the bodegas of Fundidor, Pedro Domecq and Harveys. We did a tasting of four Terry sherries, followed by a Harvey’s Bristol Cream (which is a combination of the four Terry’s) and two brandies (Fudidor and Terry).

We began with three Terry sherries that were made from 100% Palimino grapes, beginning with the lightest and driest. These were:

These were followed by a sweeter Pedro Ximenex sherry; a blend of 75% Palomino and 25% Pedro Ximenex whose grapes are sun-dried to concentrate the sugar. This was followed by Harvey’s Bristol Cream (which Tom never liked) that is made from a combination of the four Terry sherries.

While Tom found the Fino a bit sharp for his palate, he enjoyed the other three Terry’s, although the Tio Pepe Del Duque and Matusalem provide very tough, and totally unfair (they are, after all, about five times the price), comparisons.

We finished the tasting with two brandies, a Pedro Domecq Fundador (nice, but not especially noteworthy) and a very refined Terry Centanario. 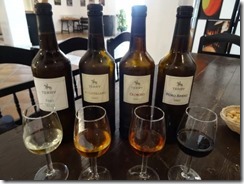