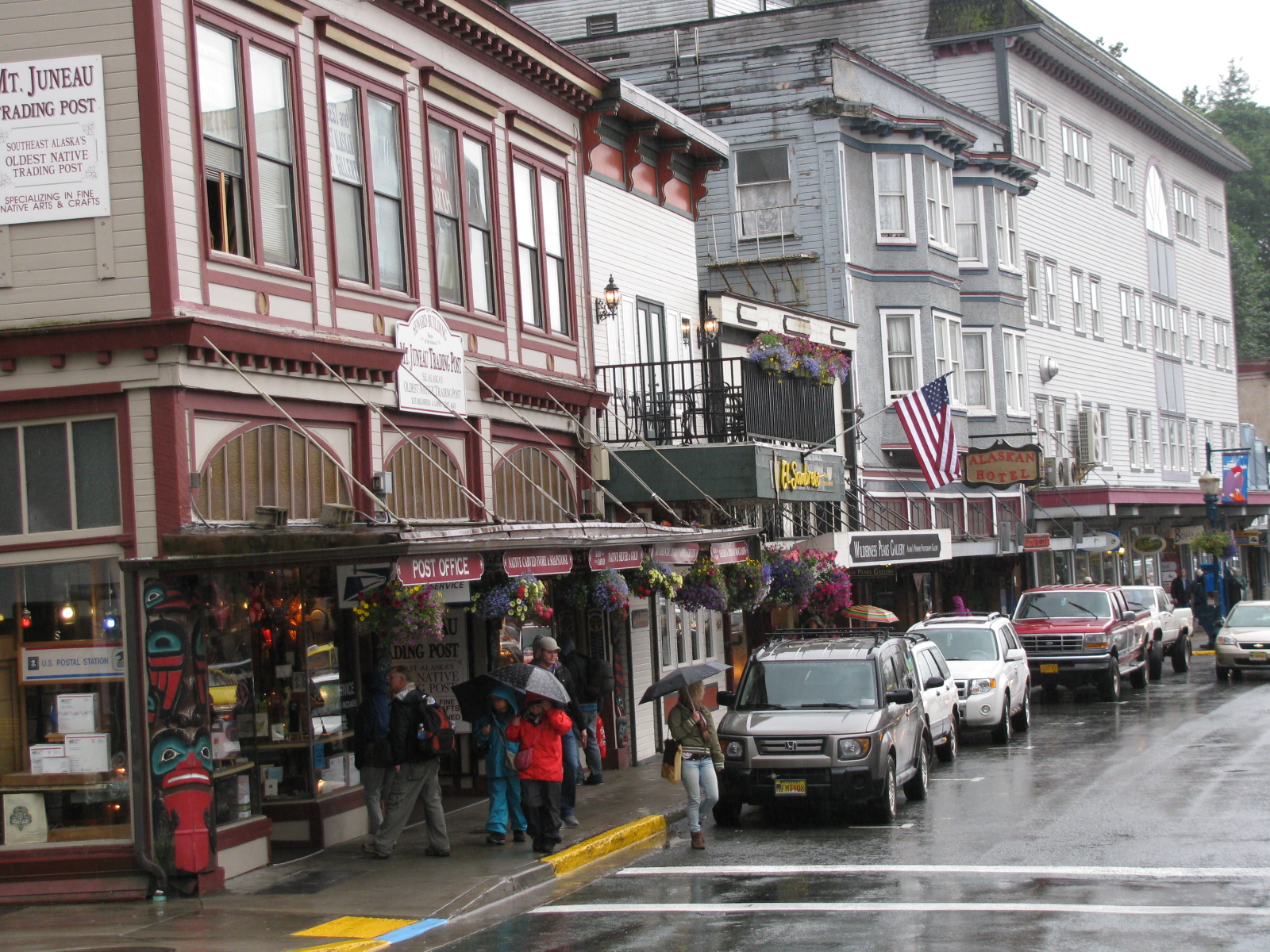 While our trip to Juneau was broken up by a trip to Glacier Bay, we ended up with the equivalent of 2.5 days and three nights in the city. As always, we tried to make every minute count. Some of the highlights of our time in Juneau included:

This blog focuses on our experiences in the downtown area, exploring the Old West architecture, the mining history of the city, and some of its bars and restaurants.

Subsequent blogs focus on our interactions with:

Juneau is a pretty town, in a lovely mountainous setting, with a lot of history. It was founded in 1881 as a gold rush town and many of the buildings, especially around Front and Franklin Streets, were built in the early

1900s.. A number of historical signs along the streets provide an overview of Juneau’s history. 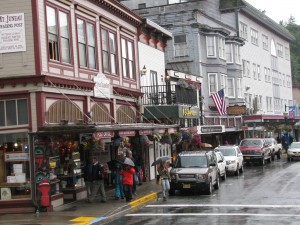 But while the buildings are pretty and old (at least by Alaskan standards, where post-Indian history began with the 1880 discovery of gold), two types of establishments occupy them—bars and tourist shops that cater to the hordes that continually embark and disembark from the floating cities (i.e., the huge tourist ships which line up on the city docks) and flood the town during the summer. Although we don’t generally have problems with either tourist shops or bars, we didn’t find much of interest in the stores. That being said, we did, however, enjoy the Wild West architecture and the character of the streets.

There are also opportunities for seeing and learning about the city other than by dodging “cruisers.” You can, for example, take an elevator to the eighth-floor observation deck of the State Office Building (affectionately known as S.O.B.) for a bird’s eye or take the tram (or for the more adventuresome, hike) close to the top of the 3,819-foot Mount Roberts for an eagle’s eye view of the town and surrounding area.

Those looking to learn more about the history of the town can visit one or more of the city’s history museums, including the Alaska State (especially strong in native history), Last Chance Mining (gold mining) and Juneau-Douglass (city history) Museums, and/or the State Capitol to see a visual history, through old photographs and front-page newspaper articles. We did the latter two.

The Juneau-Douglass Museum provided a history of the city’s emergence as a gold mining hub and emergence as a state capital, as well as a history of gold mining and processing—including the ways in which the huge Treadwell Mining Company sought to attract the best, most experienced employees with salaries, benefits, and perks that would make today’s Internet companies cringe.

The State Capital provides guided and self-guided tours of the entire building. While you can certainly see all the traditional trappings of state capitals (Governor’s office, State Senate and House Chambers and so forth), the

building is a veritable cornucopia of the state’s history, from the days it was populated by Indian tribes and then Russians, though the gold rush, the World Wars, and its 1959 statehood. Pictures include one of a pile of gold with the same value that the U.S. paid Russia for Alaska and one of a church and its subsequent (and very symbolic) transformation into a saloon.

We spent three nights in the city at the Westmark Baranof, the city’s Deco-era (built in 1939) luxury hotel. Although it has been fully remodeled, it retains much of its character. The rooms, which are a relative bargain, are comfortable, although it would help if they had thicker, better insulated walls.

But while we were generality pleased with our hotel, we can’t really say the same for most of the restaurants at which we ate. We were warned that Juneau is not known for its restaurants. Since so many of the tourists eat on cruise

ships, the dining options are limited, and what there is, is keyed largely to them. Still, with the help of locals, we searched out what was likely to be the best.

The most touristy of dining options are the salmon bakes—outdoor (weather permitting), all-you-can-eat affairs that serve salmon (and sometimes halibut) along with a range of other western and outdoor fare and often, to further

burnish their tourists bona fides, marshmallow roasts, gold panning, and souvenir photos. While we went to some of these on our first trip to Juneau (27 years ago), we decided to forgo the opportunity on this trip. We also passed on another favorite tourist haunt, the Timberline at the top of Mount Roberts.

We also had dinner at three local restaurants. First was the Gold Room at the Baranof Hotel. The dining room is reminiscent of those of many older hotels that rely more on their name and on making things easy for their guests

than on the quality of their food. One characteristic the Gold Room does not share with other such hotels, however, is that the food is reasonably priced. As for our food, the halibut with macadamia nuts was very good. On the other hand, our large, 1.5 pound order of king-crab legs, while very attractively priced—especially with the 15% discount offered to hotel guests—was a bit dry and salty.

Nor were we particularly impressed by Twisted Fish. Unlike the Gold Room, this place was packed. Our steamed clams were served in a broth that was so spiced with strong herbs as to be unworthy of dipping our bread into. The grilled halibut sandwich, on the other hand, was pretty good, although a bit skimpy on the fish.

Overall, our best dining experience was originally our third choice—Hangar on the Wharf. It too was packed. We shared two dishes. The steamed clams, while not our favorites, were definitely better than at Twisted Fish. The Macadamia-Crusted Halibut was quite good. Although the fish at Gold Room may have been a little better, the accompaniments (baked potato, broccoli with hollandaise, and the excellent fish chowder, were much better. We also liked the casual atmosphere and the décor which was reminiscent of the early day marine airplane hangar that used to occupy the site.

While we have generally spoken disparagingly of Juneau’s restaurants and bars, there were, in our mind, exceptions for both. For breakfast, we really enjoyed the muffins and scones at the hoping Silver Bow Bakery. Then there was lunch, where we broke our own unwritten rule of going twice to the same place—Tracy’s King Crab Shack.

Those who have followed our trip to Maine, and especially Wiscasset, have read of our pilgrimage to Red’s Eats—the roadside stand that serves the most famous, and by many people’s accounts, the best lobster rolls in Maine. Tracy’s

is to king crab legs what Red’s is to lobster rolls. The big differences are that Tracy’s is located in the middle of a walking town, it is nowhere near as crowded as Red’s and the waits are much shorter. The virtually zero overhead stand offers some of the best and most attractively priced crab legs we have seen, the staff is friendly and the view—at least until a cruise ship berths in the middle of it, is great. So enticed were we with Tracy’s that we went twice, one time ordering one of the special meals (combining very good crab chowder, mediocre crab cakes, and wonderful king crab legs). Each time we enjoyed it thoroughly.

We also enjoyed the incredibly touristy Red Dog Saloon. Originally founded in Juneau’s mining era, it has been period-renovated into a tourist bar par excellence. The bar’s floor is covered with sawdust and the walls filled with stuffed versions of virtually every imaginable type of Alaskan wildlife, sometimes presented in humorous scenes, as with a bear climbing a post in hot pursuit of a man trying to escape. It appears to offer continuous entertainment—especially country and western—and all presented with humor, much of which is good-naturedly targeted at the cruise ship refugees who appear to make up the majority of the bar’s clientele. Although the Red Dog is certainly kitschy, it is fun and should be experienced.