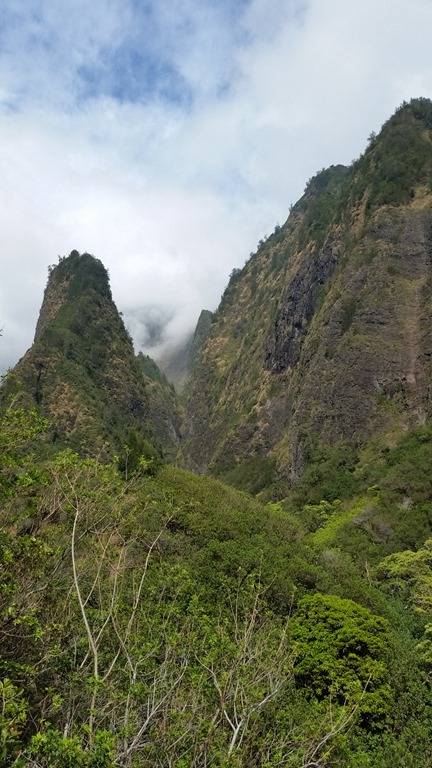 While in Maui Hawaii, we mainly stayed at on Kaanpapoli Beach and our local town was Lahaina. Kaanapol is lined with generally upper-mid-range resort hotels (most upper-range resort hotels are further south, in Wailea), pools, cabanas and casual outdoor restaurants. Given that we have little interest in most beach and resort activities, we spent little time among these amenities The exception; snorkeling around Black Rock, with its lava rocks, coral, interesting fish and occasionally, waters pulsing with the calls of whales plying the nearby ocean channels.

Lahaini is a pretty, nicely restored, albeit blatantly touristy 19th-century whaling town that we have written about many times. While its streets are lined with all types of touristy shops and inexpensive restaurants, it also have a a number of reasonably good restaurants (including Pacific’O, one of our island favorites) and dozens of interesting galleries.

We passed on revisiting the historic BaIly House, the Tropical Garden and the especially interesting Baldwin Sugar Museum, the latter of which details the foundation, growth history and ultimate decline of the island’s sugar industry. We did, however, revisit one of our favorite natural sites, Iao Valley State Park.

I’ao Valley State Park. The park was severely damaged by a major 2016 rainfall and flood that rerouted the creek that formed the majestic valley. The park was an ancient sacred royal burial site and the site of a historic battle that led to the unification of the entire Hawaiian island chain under King Kamehameha. It is also home to the I’ao needle (actually more of a phallus than a needle), the iconic, 1,200-foot spire that led the area’s natives considering it to be sacred. (Actually, it is composed of particularly hard, volcanic dike rock that eroded much more slowly than the surrounding rock

Although some of the valley’s hiking trails are still being reconstructed, the park was recently reopened to allow views of the needle. Our return visit, on the way to the airport, was brief: just enough for the short, 0.6 mile slightly uphill walk to the primary view of the needle and return to the parking lot. It, however, remains as lovely and inspirational as ever. And while we were there, we made very brif stops at the neighboring Hawaii Nature Center and Korean Heritage Garden.

These gentle, fertile, cloud-covered slopes of Maui’s Haleakala is the closest we got to the actual crater on this trip. Previous trips had taken us on hikes into the crater (including visits to its most famous living resident, the Silver Sword) and to the peak at sunrise and a half-day bike ride back down to the sea. The island’s “upcountry”, however, provides many other things to do. For example, Ziplining and hang-gliding. This trip, however, took us to experience another of the area’s other premier activities: agriculture. It is, by far, the island’s primary agriculture center accounting for most of the island’s produce and flowers. On this trip, we took our third visit to one of our favorite Upcountry destinations: a tour of and lunch at O’o Organic Farms.

O’o Farms Lunch Tour offers a three-hour affair that begins with a tour of their upland’s (3,500 feet) organic farm, followed by a huge, multi-course, produce-driven lunch to which you are encouraged to bring your own wine, which we, of course, did.

First was an in-depth tour of their organic garden that they created in 2000 primarily to produce fresh, organic fruits and vegetables for Pacific’O restaurant, which currently takes about two-thirds of the farm’s production.  We began in the coffee orchard, where we learned to judge the ripeness of the “cherries” and the process by which the seeds (beans) are dried before roasting (which we learned about later, in a tour of the roasting room). Then to the citrus grove which contains trees bearing about a dozen types of fruit, and the transportable chicken house and pen which house the hens who not only lay eggs, but also help to control pests, fertilize the gardens and trim the lawns.

The chef then explained the menu and send us out into the gardens (with our guide, of course) for a tour and to select and forage for the greens, vegetables and edible flowers we would like in our salads. We learned about the ever-expanding range of produce and herbs being grown, how to select those which were at the ideal level of ripeness and the farm’s approach to composting, sustainability and pest control. We also learned of some of their new ventures including the production of olives (from trees that were long-since planted) and the cultivation of bees (for pollinating plants and for honey). Then, while waiting for our salads to prepare, we toured the active coffee roasting facility and sat down for the feast, which is described in the Upcountry Lunch section of this post.

By then, it was time for a drink, in the form of a tour of Hali’imaile Distillery, where we learned the process for triple-distilling alcohol from fermented Maui Gold pineapple into vodka, convert locally-grown sugarcane and molasses into rum, steep herbs in vodka to make gin and blend purchased Kentucky bourbon with local herbs to create a distinctive Maui bourbon. This was followed by tastings of six different spirits, where we particularly enjoyed the chocolate-macadamia vodka.

Then a brief stop at the Flying Goat Dairy where we skipped the tour (which we had previously done) in favor of a tasting of four of the dairy’s roughly twenty types of cheese. We particularly enjoyed Canada Chevre (with cinnamon, cranberries and honey) and one of the Aged cheeses (French Dream with Provence herbs). We were less impressed by Tahitian Lime Quark ( a form of soft goat cheese that contained liquid in the form of whey), and another aged goat cheese (Napa Wrap, which was rolled in grape leaves).