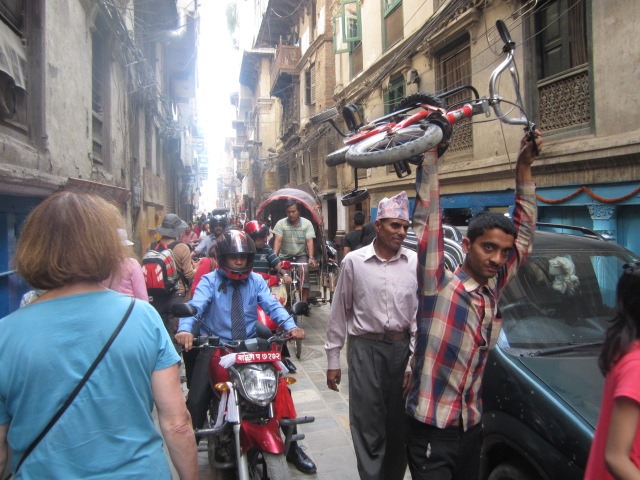 After spending almost a month in highly organized,spotlessly-scrubbed, virtually litter-free Chinese cities, arriving in the Katmandu Valley in Nepal was practically a culture shock. Trash-strewn dirt and pothole streets, chaotic traffic with cars, bikes and motorbikes all blowing their horns to get other vehicles and people out of their way, chickens and occasional cows (it is, after all, primarily a Hindu country) having free run of some city (and all village) streets, and buildings in various states of disrepair. Overall, it was far more reminiscent of India than China. This being said, the people were wonderful, the history fascinating and the views and the countryside outside of Katmandu, lovely. 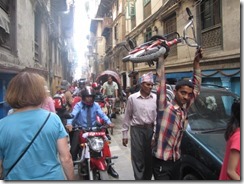 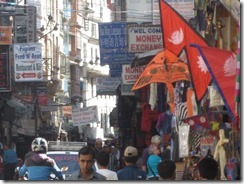 Katmandu Valley consists of three former royal capitals of separate kingdoms from the 15th through the18th century, when the country was unified. Each of the cities–Katmandu, Patan and Bhaktapur–is centered around its own Durbar Squares, the plazas in front of the royal palaces around which temples and other high-profile buildings are located.

All of these squares were, unfortunately, badly damaged in a 1934 earthquake in which more than 10,000 people were killed. While initial efforts at reconstruction were severely limited by a lack of money, things began to improve in 1979 when all three were designated World Heritage Sites and foreign money and talent began to enter the country.

Now, each of the three Durbar Squares have begin to regain much of their past glories. Each of the cities, however consists of much more than their main squares.

Katmandu’s Durbar Square covers roughly one square mile area that is lined with more than 40 Buddhist and Hindu monuments and temples built between the 12th and 18th centuries, all under the Malla Dynasty. The King’s residence, or Royal Palace, is at its center. Among the square’s most impressive of these structures are: 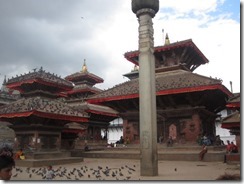 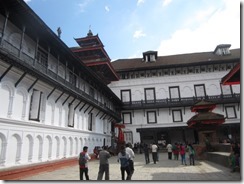 Although the square is certainly the centerpiece of the city, it is certainly not the only place of cultural or historical significance,

Swayambhunath Temple, also known as Monkey Temple for its ubiquitous inhabitants, is supposed to be the oldest (built in the 17th century), most important and most beautiful Buddhist temple in the country with, incidentally, one of the best views of the city. It was created on this spot after Tibetan Buddhists first entering Nepal saw a lotus, which they saw as a symbol. This temple, and the stupas protecting it–as the case with other Nepalese temples and stupas–has an eye painted on each side, to alert them to evil coming from all directions. 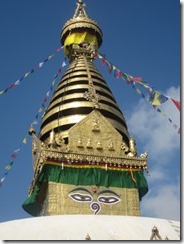 0n a less cultural side are other attractions, such as the Thamel and neighboring Durbar Marg districts, with their shops, restaurants, nightclubs, hotels and casinos. Thamel is charming, if rather rustic with its narrow, cobbled streets and thousands of tiny shops. But, pedestrians, sharing the packed streets with bikes, motorbikes and cars coming from every direction, and non-stop horns can be nerve racking. You clearly take your life in your own hands. Durbar Marg, meanwhile, has a very different feel, with its larger hotels. casinos and nightclubs. This makes it the center of the city’s nightlife.

Freak Street, meanwhile, bears little resemblance to what we read it was like in the 1960s and 70s, when it was a primary destination for Western hippies. Just next to Durbar Square, it is now a center for low-end shops selling primarily tourist items such as masks, crafts, t-shirts, and as a center for getting tattoos.

This square, created between the 13th and 17th centuries, is lined with temples, a Royal Palace, a couple of public gathering spots and a still-working and popular water pool, with spouts in the shape of ornate crocodiles and a snake.

Some of the nicest temples were the Teg and Taleju temples with their intricate and well-preserved wood carvings; the two 13th century temples dedicated to Krishna; the tall, narrow dome temple to Vishnu; and two for Shiva.

One of the highlights of the square is the Royal Palace, which the Nepalese and Austrian governments jointly converted into a wonderfully laid-out, very educational display of Nepal’s sacred art, along with descriptions of how the castings were made.

Further from the town center is the Hiranya Varna Mahabihar, or Golden Temple, with its gold roof and wall paintings. 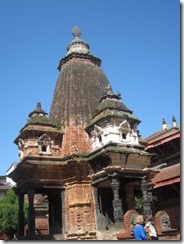 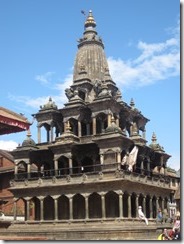 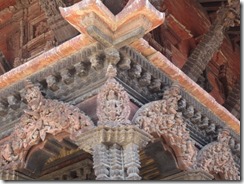 Bhaktapur, the third of the royal valley cities, also has a lovely Durbar Square that is lined by temples, stupas, palaces and carved stone pillars. Among the square’s highlights are the:

One way to combine a nice view of the square, while simultaneously pausing for a refresher, is at one of the top floors of the cafe across from the Royal Palace. 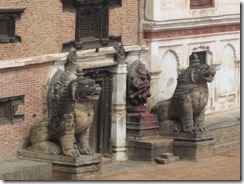 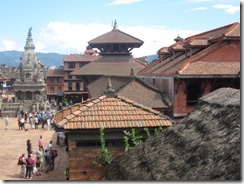 One of the most impressive temples, was in another square altogether. The relatively small Taumadhi Square houses three significant temples with the tallest and most beautiful one by far being the Nyatapola Temple. This pagoda-style temple has five levels, each of which is elegantly smaller than the one below. The steps of the temple, meanwhile, are protected by five matching pairs of nicely detailed animals, including elephants and lions.

Much further out of town, atop a hill at the city’s entry stands a temple with the tallest statue of Shiva in the world.

This sacred Hindu site is a combination temple, monument, welfare center and cremation site where bodies are burned on ghats over the river (reminded us of a smaller version of Varanasi in India). The original temple, long since gone, was thought to have been built on this site in the early 12th century and constructed in its present form in the late 14th century. The entire site came much later, in the early 20th century. Since we arrived during a religious festival, the site was filled with worshippers. Even so, it was hard to escape the solemnity of the site, with people meditating and praying. smoking cremation fires , monuments being tended, cows being fed and beggars–including many suffering from very severe, very advanced forms of leprosy–trying to find ways to pay for their funeral pyres, not to speak of their next meals. 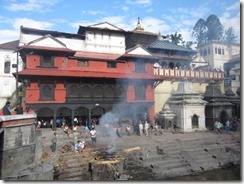 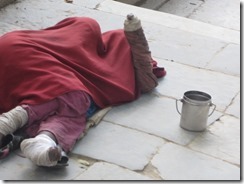 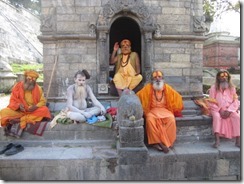 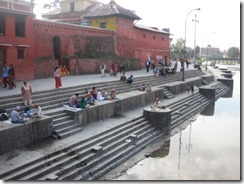