Kennebunkport Maine is on the Kennebunkport River at the mouth of the Atlantic Ocean.  By the 1870s, it became a popular summer place. Today it draws in the upper class (including the former president Bush family) and it is one of the wealthiest communities in the state of Maine.

Kennebunkport is a typical New England charming tourist town with a beautiful harbor. It has loads of local water sports like fishing, sailing, boat tours, or lazing around or swimming on the beaches. 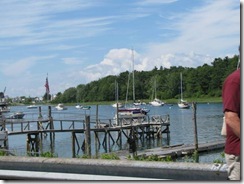 It is filled with grand homes (many of which were suitably adorned when we were there July 4th) and the somewhat overly cute Wedding Cake House, which a husband had built for his new bride. 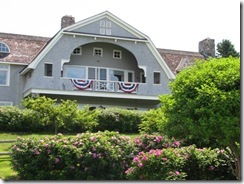 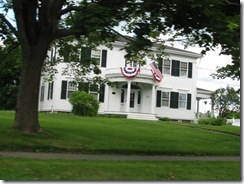 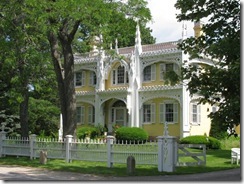 We have never stayed in Kennebunkport, but we have stopped there often for lunch. For many years we had been addicted to The Clam Shack’s sinfully wonderful, ultra-healthy <not> fried belly clams and onion rings for years. So every chance we had, we would endure the long line of cars and even longer line of customers waiting in line for a chance to order at the famed fast-food stand. Yes, the lines are long. But hey, you can get a glass of wine or beer while waiting.

The second-to-last time we were there, however, we were disappointed with the small size of the bellies (and the resultant predominance of batter in the taste). OK, we thought. Any place can have a bad day and we tried again on another trip. After a 20 minute or so wait to order and another 15 minutes to get the food, we emerged with our standard order (a quart of belly clams, a pint of onion rings, an IPA, and a white wine).

Once again, we found the clam bellies to still be disturbingly small and breading to be the predominant texture and flavor.  Even the onion rings were disappointing. While it is painful to say, our Clam Shack days are over. We ended up leaving much of our expensive lunch with a resolve to not return in the future. We won’t miss the traffic or the seagulls that try to swoop down and knock your food to the ground so that they can get it. But we will certainly miss what used to be a great lunch. So sad and so disappointing.