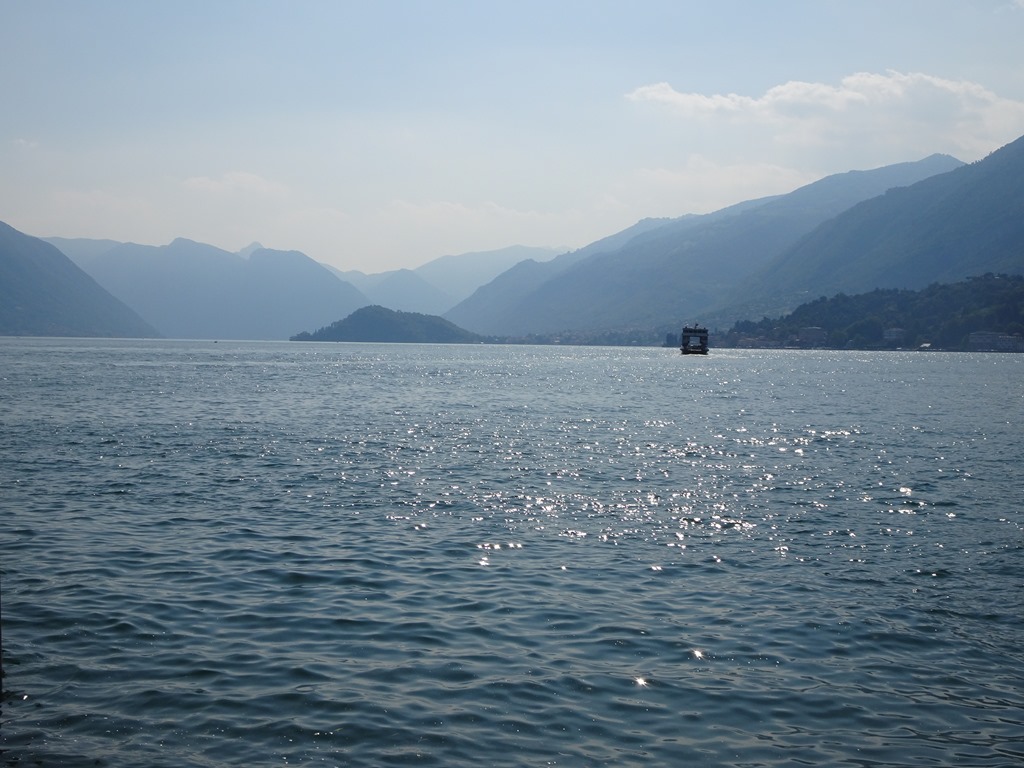 Lake Como is a beautiful, tranquil glacial mountain lake in the foothills of the Alps (northern Italy) that is shaped like wishbone. It is a beautiful place to recharge. We drove up the west side of the eastern leg of the lake, from the industrial city of Lecco to the beautiful resort town of Bellagio. We stayed in Bellagio, the center of that wishbone, and the deepest point of the lake which, at about 1,300 feet is one of the deepest in Europe. The water and its position in the foothills of northern Italy helps moderate the heat of the Italian summers (although we found nothing moderate about the unrelenting heat), which, along with its idyllic setting and lovely views, has made it a popular tourist destination and resort area since Roman times.

While in the Lake Como region, we stayed in Bellagio. This beautiful place, which has been almost certainly been settled for about 30,000 years, has a documented history that goes back to the 7th century B.C. Like many European towns, it changed hands several times through its history. It emerged as a resort destination in the late 18th century, when the Duke of Lodi built his summer home here. He attracted scores of Milanese nobles. Roads and infrastructure were built and the town’s reputation steadily grew. By 1825, resort hotels began to spring up and aristocrats began building their own summer homes in the town. 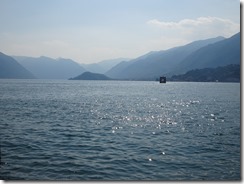 The central part of town, with its cobbled, Medieval alleyways and stairs meandering down to the seashore, is the definition of upscale, tourist quaint. They are lined with small, 17th and 18th-century stone shops housing restaurants or selling wine, gourmet foods and resort-chic clothes and accessories. The central part of town is anchored by the 11th-century, Romanesque-style Basilica of San Giacomo, with its stone bell tower that used to be part of the town’s defenses. 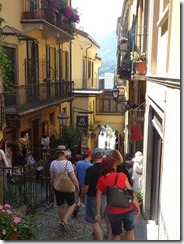 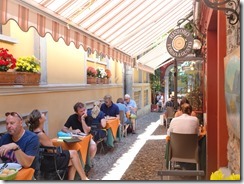 The shoreline, meanwhile, presents a totally different picture of the town. Its string of resorts and its promenade could easily be mistaken for a Cote d’Azur beach town, were it not for the mountainous skyline and the continuous stream of ferries that dock in town. People walk the tree-shaded, flower-adorned walkways, fishing off the docks and eating on the patios of all the restaurants. 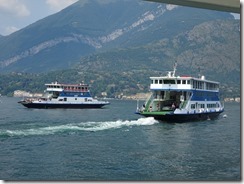 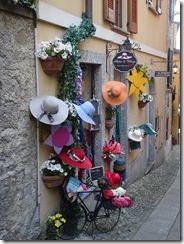 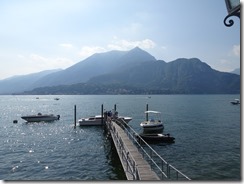 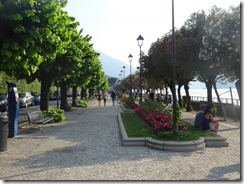 And then there is the big, important part of Bellagio that few people get to see, at least from the roads and sidewalks: The estates, mansions and private parks and gardens hidden behind tall, stucco-coated fences and dense hedges. The ones that front on and can only be clearly seen from the lake. Just below this level, the Grand Hotel Villa Serbeloni, a 19th-century Neo-Classical palace that is now an exclusive resort with muraled and coffered ceilings, beautifully manicured grounds, elegantly decorated lobby and public spaces and ivy-clad out-buildings. 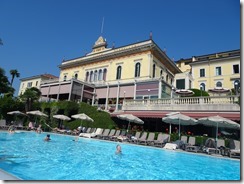 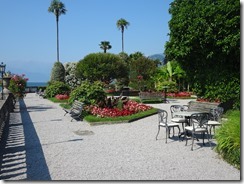 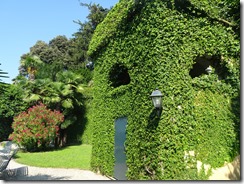 The town is also a center for sailing, windsurfing, mountain biking, rowing, trekking and other sports.

Bilacus, a downtown restaurant where we enjoyed a pleasant, if not especially memorable meal on its lovely, wine-covered deck. We began with parma ham and melon and then shared a lake fish platter with grilled trout and laverello (a light, textured and tasting white fish) and fried perch. While the trout was excellent the ultra-thin laverello and perch lost too much of this moisture with even brief cooking. While the restaurant was out of the Lombardy white wine that we selected, the wait person offered, and we accepted a “pinot grigio-ish” 2017 Mamete Prevestini Opera blend (80 percent chardonnay, 20 percent sauvignon blanc) from Lombardy’s Mamete region. We finished with a very nice desert of scodella (a crème bouilli-like vanilla custard with strawberries and vanilla gelato).

Ristoro & Gusto, a casual restaurant where we had a satisfying pasta lunch of spaghetti carbonara and lasagna alla Bolognese with a mixture of beef, lamb and pork. We had with this, a half carafe of Vineto Merlot.

Barchetta was one of the restaurant of our trip that was fully booked with reservations. And for good reason, The service was highly professional, the atmosphere was upscale without being stuffy and the menu and wine list were by far, the most interesting that we found in town. We had two main course dishes. The veal with marsala sauce was fine, if not especially memorable, The lightly fried lake perch with saffron risotto, meanwhile, was rich (but not too rich) and delicious. For wine, we chose a light red, 2016 Schreckbichi Colterenzio Pinto Nero from Alto Adige-Trentino in the furthest north of the country. We finished with an equally good dessert of sabayon with biscuits, with a nice, complementary glass of Amara Averna.

Hotel Du Lac Piazza Mazzini. The room was quite large with 2 big windows to let in light (no view). Bed was comfortable except for the mattress pad which seem to have a moisture barrier on it to protect the mattress. The result was the we kept waking up feeling the humidity and heat under the covers as the moisture barrier kept in the heat. Bed was also a little short but plenty wide. Other than that, no complaints. The room had a water hot pot. Bathroom was older but functional. Towels were large. AC worked well (although we could never figure out what the controls meant). We initially had an issue with wifi, but I think they reset it after we complained and it then worked fine. Parking right outside the building for 15 euros a day. It is right in front of where the ferries take off so very convenient location.