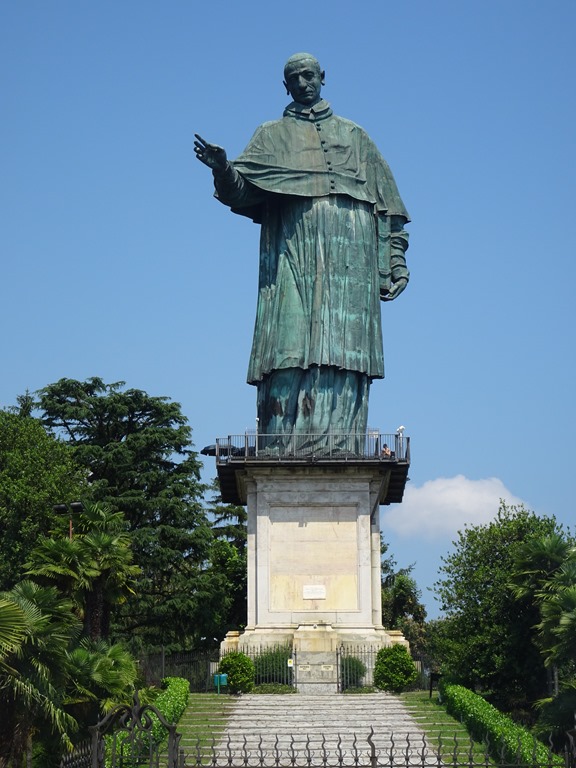 Lake Maggiore is the second largest of Italy’s lakes (after Lake Garda, and just before Lake Como), The lake is at the border of Switzerland and the Swiss Alps, at its northern part and with Piemonte at its south. The hillsides, relatively gentle in the south and steep in the north are filled with vegetation and, not surprisingly, a number of botanical gardens.

We began our abbreviated exploration in Arona, on the southwest corner and drove about one-third of the way up the long lake to Stresa.

Arona has a pretty lakefront and a cathedral with a nice stone-carved façade.

It is particularly noted for its 115-foot bronze statue of St. Charles Borromeo, the cardinal and archbishop of Milan who was born in the city in 1538. Built in 1698, the statue overlooks the city, is claimed to be the second largest in the world, after the Statue of Liberty. (Although it may not be the largest statue, it probably has the largest thumb—1.4 meters). One can enter and climb steps up the sculpture to catch the views from both its eyes and its ears. To get a feel for the size, look for the small people at the base. 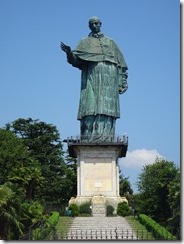 The remains of the castle in which Borromeo was born are also visible on a hill overlooking the city. 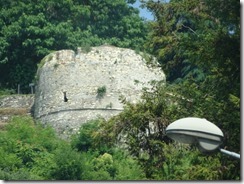 Strattoria, a pleasant Trattoria at which we both had nice, albeit not especially memorable meals. Joyce had a pretty good purple potato gnocchi with beef sausage and saffron sauce; Tom had seared duck breast with mustardel sauce, ovoli mushrooms and spinach.

Although settled at least in the 10th century, Stresa grew into a substantial fishing community by the 15th century. It was immortalized by Ernest Hemmingway in 1929, with its Grand Hotel des lies Borromees appearance in A Call to Arms.

It is now the lake’s primary resort town, with all the associated hotels (including a lovely Grand Hotel), villas and formal gardens. 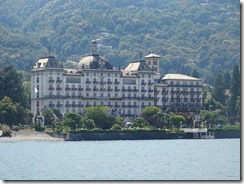 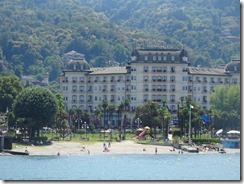 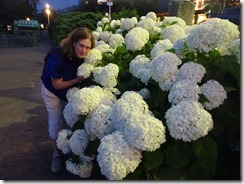 The town is pleasant enough. Although the center of the city, in the few blocks around its main piazza is very modest, it does have a couple of interesting gourmet shops and at least two (that we tried) interesting restaurants, among a number with very similar menus. The whole area, and especially Piazza L’Cadorna, however, takes on a very different character at night, when the restaurants are overflowing and the piazzas and streets are filled with street entertainers. 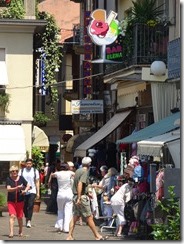 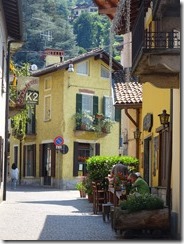 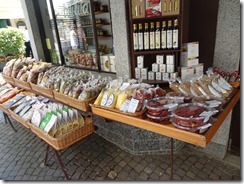 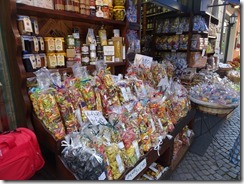 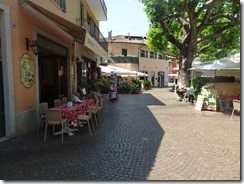 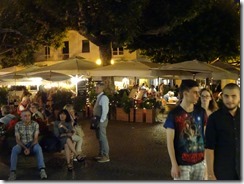 The city’s main street, Umberti I, is lined, on one side, by large, and in some cases, very dramatic resort hotels, large gardens and two somewhat historic buildings: 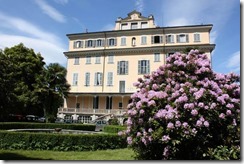 The entire other side of the street is dedicated to a very narrow, but very long and lovely park that runs between the main resort-lined Umberto In and the lake. The park provides mountain views up and down the shoreline and across the lake. That’s a given based on its location in the foothills of the Alps. It also has pretty much everything you could want in a lakefront park, from a beach and a swimming pool (for those who prefer contained, chlorinated swimming), café-style restaurants, trees, flower gardens, fountains, statues, pleasure craft harbor, large daily (60 tents) craft shows and when we were there, a large, evening, candlelit meditation class. It also has a cable car that can take you up to a nearby mountaintop (Mottarone) for a panoramic view of the area and two ferry terminals (it is, after all, a long park.)

Although the ferry has a few stops on the mainland, its primary destinations are the Booromean Islands, which lie just offshore.

Two of these three small islands, Isola Bella and Isola Madre, were once homes to private villas and gardens and are now tourist destinations. The third (not to count two tiny islets), Isola des Pescatori, is inhabited as a small, as the name suggest, fishing village. We visited two of the islands:

Isola Bella is home to and is primarily (probably over 75 percent) occupied by an incredible 17th-century Baroque palace and its even more incredible formal Italianate garden. The island was bought and the palace and gardens constructed by Vitaliano VI Borromeo, the local ruler, as an anniversary present for his wife (a niece of one of then Medici popes).

Although the palace is certainly huge, it is also extravagant and somewhat quirky. Among the most extravagant of its rooms are the Thone Room (with its stucco ceiling, carved wood statues leaping from the walls, Neapolitan cabinets and the tapestry behind the throne), the Queen’s Room (carved wood and gilded balustrades, turquoise and gold wall medallions and mosaic floors), Medals Room (named for the carved, gilt wall medallions of St. Borromeo’s life and containing a a dining room table with a display of French opal glass), Reception Room (a three-floor, domed showpiece with incredible carved marble consoles and statues, Music Room (inlaid piano-forte and other instruments), Ballroom (mirror-lined with marble statues) and Napoleon Room (where the Emperor and Josephine spent a night after stopping, unannounced, with an entourage of 60) and Hall of Tapestries (forest and animal-themed). The walls of less extravagant main floor rooms, meanwhile, were lined, floor to ceiling with the family’s collection of paintings. 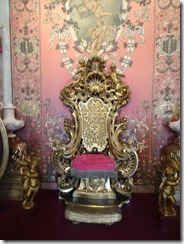 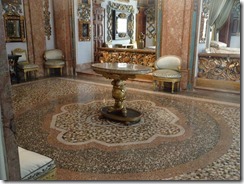 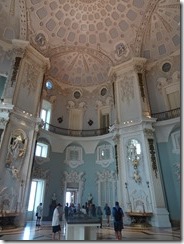 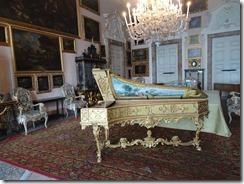 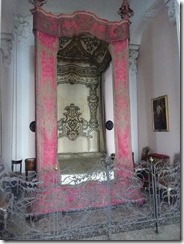 The downstairs portrays the family’s more quirky tastes, and at the same time, its practical side. While one displays its collection of puppets. Another five so-called “grottos” are all pebble-mosaic floors, coral and carved rock walls and coral and pebble-mosaic ceilings, which remained cool in the hottest of Italian summers. 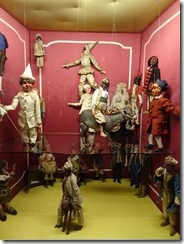 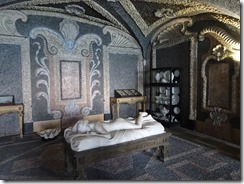 Floors are connected with stairways. There is, of course, a formal marble stairway and a less grand informal staircase. The most interesting, however, is a circular, stone-slab staircase that rises from the Grotto Rooms to the top of the palace’s tower. The hundreds of heavy stone slabs have no visible mans of support other than the walls from which they protrude and the steps beneath them. Very impressive. 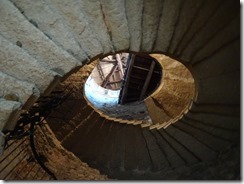 Then there are the gardens: multi-leveled masterpieces, connected by layers of stairs, they are landscaped with century trees, sculpted trees and bushes, formal flower gardens and around them, stroll a few large, snow-white peacocks. All the gardens, of course, offer stunning views of the lake, the mainland and the surrounding islands. 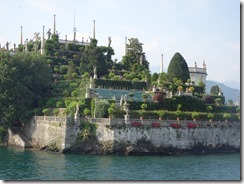 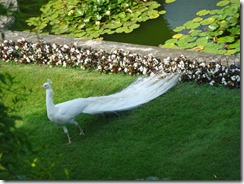 The highlight of the garden, however, is the roughly three-story Teatro Massimo and the grand terrace that towers behind it and provides a spectacle of stepped, sculpture-lined gardens and a series of pillars topped by bronze sculptures that greet visitors with a show of spectacle from the sea. But as impressive as the stepped gardens, the Teatro itself is the show-stopper. An amazing, multi-story fountain lined with sea-themed, carved-stone, coral and pebble mosaic levels, each with carved statutes: sea gods, rearing unicorns and many other mythical characters. It truly must be seen to be appreciated. 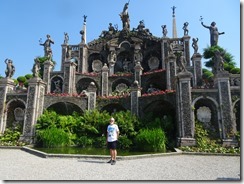 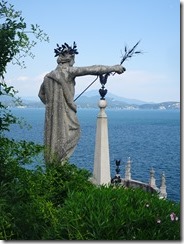 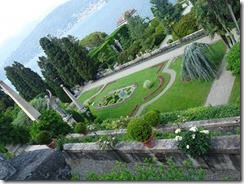 The other roughly quarter of the island, initially part of the estate, now contains a church and a couple dozen private 19th-century buildings, most of whose ground floors are now occupied by tourist stores and restaurants.

Isola Pescadori, a tiny, 300×100 meter island was originally a fishing village. It has one tiny harbor street, one shoreline path and a narrow center, cobbled, pedestrian street, connected by a few cobbled alleyways. It is now it is now both a residential community with a small parish church. It is also a tourist haven with a couple boutique hotels and some of the area’s largest and best lake fish restaurants that ferry dinner guests to and from the mainland on private water shuttles. We had a lovely dinner at one of these, Belvedere. 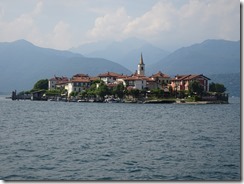 Mottarone, a roughy 5,000-foot mountain that overlooks Stress and is accessible either via car or a cable car from the waterfront. Although we initially thought of taking a roughly three-hour round trip drive up the lake into the Swiss Alps, we decided that three hours of mountain driving was no way to spend one of the trip’s few leisure days. So we took the lazy-man’s way of getting a peak at the snow-capped mountains.

This entailed a two-stage cable car ride followed by a chairlift to the top of the mountain. Each of the stops, meanwhile, has its own attractions—not to speak of views. The intermediate cable car stop, for example, has an alpine botanical garden. The stop between the second car and the chairlift has a restaurant and a church. The top, meanwhile, is home of Alpyland (a fun park featuring a ride that is a cross between a bobsled and a roller coaster) and connection to another chairlift that takes you to ski slope on the opposite side of the mountain. Then there is a farm of microwave and cell towers and of course, 360-degree views that range from the Po Valley and seven different lakes to the southeast the snow-capped Alps and Mount Rosa (the second highest mountain Europe) to the northwest. There are also hiking and mountain bike trails in addition to winter skiing.

The cable car passes over, but does not stop at the small, quaint mountainside town of Gignese, with its steep, narrow streets, red-tile roofs and its tiny Old Town.

Belvedere, a lovely setting with a patio overlooking the shore, at which we had lovely and very good dinner. After a standard, complementary glass of prosecco, we began with citrus-marinated trout carpaccio with caper oil, fennel and greens and followed with two mains: black and white sesame-crusted tuna with aubergine roasted potatoes, and a mixed lake grill with red and white trout, perch and white fish, steamed vegetables and roasted potatoes. Dinner was accompanied by a bottle of 2016 Laura Aschero Vermentino della Riviera de Ponetite. And since we couldn’t resist, we ended with a ricotta and almond tartlet with vanilla sauce and grappa. All very good, and almost on order, a textbook sunset that accompanied desert and our ferry back to shore.

Los Stornello, an upscale restaurant in the city center where we had two entrees, both of which were very good: seared pikeperch with fava beans, confit cherry tomatoes and roasted potatoes; and rabbit loin stuffed with salami paste and herbs with what was labeled as chestnut honey, but tasted like some type of balsamic reduction. Our wine was a 2015 Barbera d’Asti Superiore le Orma from Michele Chiarlo (black cherry and tobacco). A very nice meal followed by an addictive homemade limoncello cream.

Mamma Mia, a popular Italian restaurant that specializes in pizza. Although we would have normally rejected it on the basis of its name alone, our concierge specifically recommended it. And since we found ourselves in the mood for a lunch pizza, we took a chance. For lunch, we enjoyed a tomato sauce, mozzarella, wild mushroom, ham and truffle pizza and a half carafe of vino rosso. We left with no regrets for having chosen it.

Hotel Milan Speranza au Lac We had a hard time believing this was a 4 star hotel. In researching what the stars meant, we discovered that they had nothing whatsoever to do with the room quality but was more about how many towels you received, if there was a bar and other things like that. Based on travelling for 3 months in Europe, this is a 3 stars based on room quality at best. Very small room, very small bathroom, tired furnishings. In fairness, when we complained about the small “double” bed (the smallest double bed we have run into in Italy), they put us in a room with 2 twins pushed together (much better). The sleep quality (bed/linens) was fine. The room had decent air conditioning and large towels. When we asked for a kettle, it was brought up to the room. Breakfast was only cold items. Location was great however. But for the quality of the room, you should be able to find better.