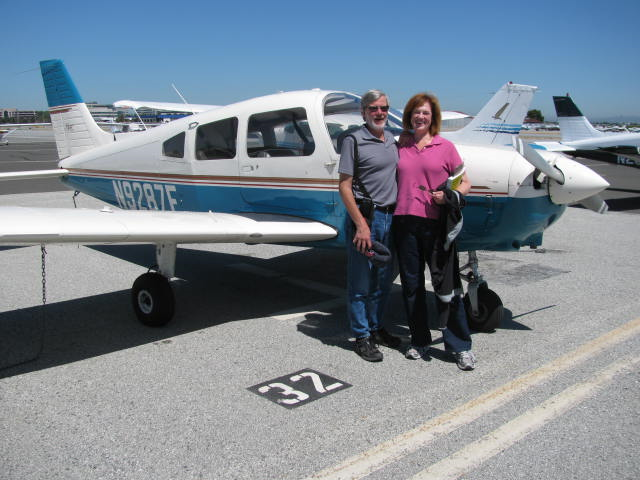 Anyone who has ever received an email or clicked on a URL is now familiar with, and has by now, taken advantages of the proliferation of discount offers for restaurants, spas, tennis and golf lessons, mother day flowers and virtually every other imaginable service and product. We, like most other boomers who have helplessly watched their nest eggs shrivel, have taken advantage of a number of these offers. The discounts have given us a semi-guilt-free way of finding new and revisiting old favorites.

We are now seeing a growing number of other offers that take the guilt out of gaining new experiences. We, for example, have always wanted to see what it was like to ride a Segway, but never quite got around to trying. Although we were tempted to take one of the growing number of Segway city tours, we expected that these, like many other “gimmick tours” would be heavy on entertainment, light on content and not worth the money. We, therefore, always found reasons not to take these tours.

I (much more so than we), meanwhile, have always wondered what it would be like to fly a small plane. I, for example, take advantage of every opportunity to sit next to small plane pilots on small puddle-jumper flights and, before and after every flight, peeper them with questions. Although I had periodically toyed with the idea of taking flying lessons, I knew that I would never go through the very time-consuming and expensive process of learning to fly, and even if I did, would never, spend the time or the money required to maintain certification.

Half-priced offers satisfied allowed me to satisfy both desires while simultaneously eliminating all cost-based trepidation and guilt. Better yet, the half-price flight lesson for two even prompted Joyce to through caution to the wind (so to speak).

Our Segway experience came in San Francisco with the Electric Tour Company. After about 30 minutes of safety and operational training, we left for an hour ride through some of the flatter parts of the northeastern parts of the city.

Although balance was, at first, a bit shaky, the gyroscopic controls prevented even the perception that one may fall. The biggest challenge was staying stationary. Since even small shifts in body weight, from heel to toe, resulted in slow movement, initial attempts at remaining stationary resulted in slow rocking back and forth. But, after a couple minutes of practice, accelerating, slowing, stopping, inching backward and turning became almost second nature. Within 15 or 20 minutes on the road, most of us felt fully in control. (Some people, however, after several minutes of instinctively flexing their feet to control movement, felt their feet tiring—an affliction that was easily remedied by a brief stop.) By the end of the hour, we were skimming along the city streets like pros.

What about the educational-entertainment tradeoffs of the tour? The entertainment quotient was certainly pretty high and the content is, as it certainly should be, geared to people who are new the city. Even so, even Joyce and I—virtual natives after living in the city for eight years—did learn some interesting facts. We are now anticipating our next Segway challenge—the advanced session in which we would traverse the city’s hills—including the crooked Lombard Street. Even so, I’m not sure we will do it without another half-price offer.

Our First  (and only?) Flying Lesson

Our flight lesson came courtesy of www.flybayarea.com in San Carlos, about 25 miles down the peninsula. The lesson begins on the ground, with an overview of the four-passenger, 4-cylinder, 160-horsepower Piper Trainer. Gabe Somma, our very patient instructor, showed us and explained the functions of the planes’ control system (ailerons, flaps, rudder, elevator, stabilizer, vertical fins, and so forth) and how the pilot operates each. Then, after a pre-flight inspection, we climbed in, buckled ourselves in and tried to absorb the placement and functions of the instrumentation and get a feel for the yoke and pedals. After going through every item on the pre-flight checklist, we got approval from the tower and began taxiing.

There began our hands-on lesson. While Gabe set the throttle, he had me immediately takeover the steering, using the pedals to guide us to the end of the runway. While Gabe took off, he turned the controls over to me (while continually maintaining the ability to resume control) at about 700 feet elevation. He told me the altitude we wanted to reach (2500 feet) and the airspeed we wanted to maintain (80-100 knots) and then talked me through the process. 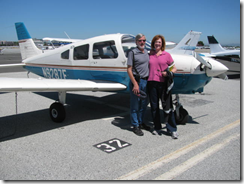 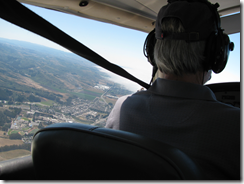 When we got to the desired altitude, we executed a series of turns (with Gabe explaining the proper combination of pedals and yoke and what to look for on the instruments. We then climbed above 3,000 feet, used the trim wheel to maintain stability and enjoyed the wonderful view. I maintained control, including lowering the throttle, descending and positioning the plane relative to the runway, to about 500 feet, at which point our instructor executed what seemed to be a perfect landing.

The hour-and-a-half lesson, including about 45 minutes in the air, took us through the four fundamentals of flying:

Our “debriefing” took us through the composition of future lessons, through soloing, and ultimately, receiving a license. Although we haven’t decided wither to invest the additional 48 hours and $12,000-$15,000 required for one of us to qualify for a private pilot’s license, we would certainly consider working with Gabe.

The only caveat is that the standard “Lesson for Two” provides only one of the two students a chance to fly. Given that changing pilots would require landing of the plane, Gabe understandably charges extra for a longer lesson in which both people fly. So to extend the normal trip, which circles past Half Moon Bay and back across the peninsula, to fly-over of San Francisco.

Our flight lesson went better than some of our other lessons—particularly rock climbing. Joyce, for example, downright flunked rappelling. While I muddled through all the required maneuvers, our instructor not so subtly suggested that we leave rock climbing to others. We, therefore, took it as high praise when Gabe told us that if we chose to take additional lessons, we were likely to “learn quickly.”

Our flight experience did teach us a very important lesson—learning to fly works up an appetite. Luckily, we know of a stop along the way that never fails to sate not just our hunger, but also our appetite Better yet, it does so for four wonderful meals, at a cost of about $60.

This magic elixir can be found at South San Francisco’s New England Lobster Company, which stocks an almost endless supply of fresh New England shellfish. Whenever we are on the peninsula in the morning or early afternoon, we try to get to outlet before its 2:00 closing time. When we do, we pick up a five pound bag of littleneck clams (lunch) and two 1 3/4–pound lobsters (plenty for dinner, with enough left over for a lobster soufflé, enough for two additional meals).