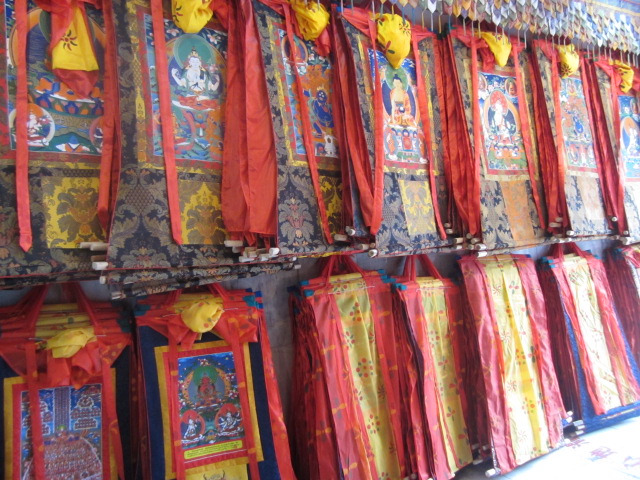 Three days is difficult to assess an entire country (OK, we still think of Tibet as a country versus part of China). We concentrated our time in Tibet around Lhasa, the largest city.

We spent our first afternoon and evening in the city on our own, exploring the ancient, bustling center of the Barkhor (old town). From then on, we relied primarily on our Wild China guide to take us to the city’s most important religious and cultural sights–and especially to explain what we were seeing.

The city and its religious heritage are largely attributable to 7th-century King Songsten Gampo and his three wives:

The King brought Buddhism to the country. He built the country’s religious center (the Jokhang Temple) to house an image of the Buddha that was his Chinese wife’s dowry (he married her just to obtain this image). He also built the first palace of what is now the huge iconic Potala Palace and a number of other historic and religious landmarks, including the Ramoche Temple (built to house the Buddha icon from his Nepalese wife’s dowry) and the Ani Tsankhung Nunnery.

Many of these sites have since gained even greater religious and cultural significance as being the home, the throne room, and the religious and temporal headquarters of generations of the Dali Lama. They are also secured by a large police presence, who dictate what the monks, local people, and tourists can and cannot do. We know the people resent this. And how about the monks? Well, when we ask we if can go somewhere or take a picture, the monks tell us it is ok with them but the police say no……who knows if it is an excuse or not?

When we entered Lhasa, we thought it was just another city. Then we entered the Barkhor, or old section of Lhasa. It was like entering another world.

New Town Lhasa looked similar to other small Chinese cities with its new buildings, shops, and people in western attire. But the Main Street of Old Town had buildings with more traditional windows, which certainly had more character, but provided only a tiny clue as to the unique world that existed inside the Barkhor.

Suddenly, we were surrounded by 300-800-year-old buildings in great repair. We were in the midst of thousands of people. Many women were in traditional clothes (married women wear woven shirk-like garments). People were walking clockwise–all clockwise–around the Jokhang Temple and the surrounding shops in their daily prayers. As we later learned, this is the shortest of three of the city’s prayer routes. There is another longer route around the Portola Palace and the longest (about five hours) around the entire Old City.

While most people just walked the routes chanting or talking with their friends (or in some cases, talking on their cell phones), some walked just a few steps before raising their hands in prayer, prostrating themselves on the ground, getting up, and repeating the process over and over again. Others performed similar ceremonies in place, on special mats in front of particularly holy sites. It was amazing to us how much time people spent in prayer. They would often stop in tea houses, or pick up food from the food stands along the way.

Prayer flags were flown above buildings and on poles around the Temple entrance. Meanwhile, everybody was wearing or carrying prayer beads, and some were continually turning prayer wheels. Some prayer wheels were small enough to be held in a hand, other larger ones with longer handles.

The Barkhor is not only the ancient center of the city’s religious life, it is also a center of social and commercial life. This warren of small cobblestone alleys radiates from–and around–the 13th-century-old Jokhang Temple, the country’s most important religious site. It draws religious pilgrims who visit it to worship and pay homage to a number of deities. It has also been the city’s primary marketplace for the last 1,200 years, with hundreds of shops and stalls selling everything from food to religious symbols and cheap tourist memorabilia.

All of this history, charm, and activity brings tourists. We particularly liked the yak meat stalls, with yak heads on the ground, yak steaks hanging above the counter and selected entrails gracing lower shelves–and that was before having two very different yak dishes for dinner and discovering that yak is some of the tastiest meat we have ever eaten. And then, there were the stalls selling yak butter. The butter is not just for eating, but also is an oil to fuel the incredible number of devotional yak butter lamps that burned in all of the city’s Buddhist sites.

The Barkhor’s authenticity has been somewhat diminished by the demolition of some historic buildings (both intentionally and during the Cultural Revolution) in favor of somewhat idolized historic reconstructions, and by a number of tourist shops. Yet a number of historic buildings remain, including a few from as far back as the 8th century.

And if the history, the religious rituals, and the milieu of the Barkhor are not enough to create atmosphere, add in the smell of burning incense, burning juniper bushes, devotional flames fueled by donated yak butter, the fluttering of prayer flags and the white scarves to honor deities and you will soon get into the spirit.