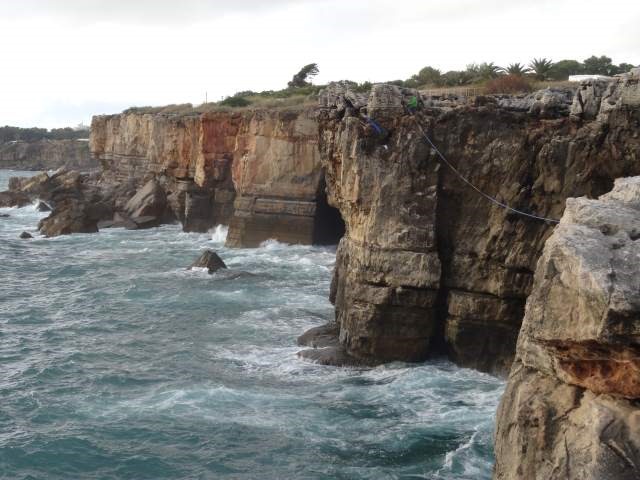 We picked up a car and left Lisbon to the north, taking in the lovely shore of the coastline and a number of the most interesting and historically important stops on the 300+ kilometer drive to the land of port wine. Among our most notable quick-stops were: And then we finally reached our evening destination, Sintra, a very pretty town built into a mountainside and a favored summer retreat for kings is loaded with sights, from the royal and historical, to the downright fun and quirky. It more than merits a full day and night. Although we had a night, we only had half a day. We viewed some of the town center’s primary sights from the outside. These included: And speaking of tiles, a short walk out of the downtown takes you past a former chapel with beautiful blue tiling and an entry gate to a wonderful estate that takes you through a tiled version of the town’s history. Although we skipped the imposing mountaintop castle and such grand palaces and gardens as Palacio da Pena, Palacio de Seteais and Monserrate, we did make an extended visit to one must-visit estate: It is a fun, almost surreal experience that makes you anxiously await the next sight and ensure that you don’t miss any.

One a more serious note, the estate also has two chapels (one underground and another standalone that, surprise, takes you down to another tunnel, and a mansion. The beautifully restored mansion, with its ornately tiled floors, carved ceilings and fireplaces and inset portraits, also tell the stories of the owner and the architect and for those who are interested, provides detailed architectural drawings and plans. Among can’t miss stops: Initiactic Well (the underground tower), Labrinthic Grotto (with the waterfall), Portal of the Guardians (twin-towered entrance to the well) and the main house.

We stayed that night at the conveniently located Sintra Boutique Hotel. The hotel was pleasant enough and was close to anything we wanted to do. Our dinner was at Restaurtante Apeadeiro, the very busy and most highly recommended dinner in town. Unfortunately, we were not impressed.  Although the grilled grouper was okay, the fried calamari and shrimp plate was so filled with French fries as to provide little room for the small handful of calamari (which weren’t bad) and tiny shrimp (which were so overdone as to be inedible). And since they were so busy, it was hard to get service. Meanwhile, the wine, a 2010 Esporao Reserva from the Alentejo region, was, like many of the other Portuguese wines we had, fruity, straightforward and easy drinking.