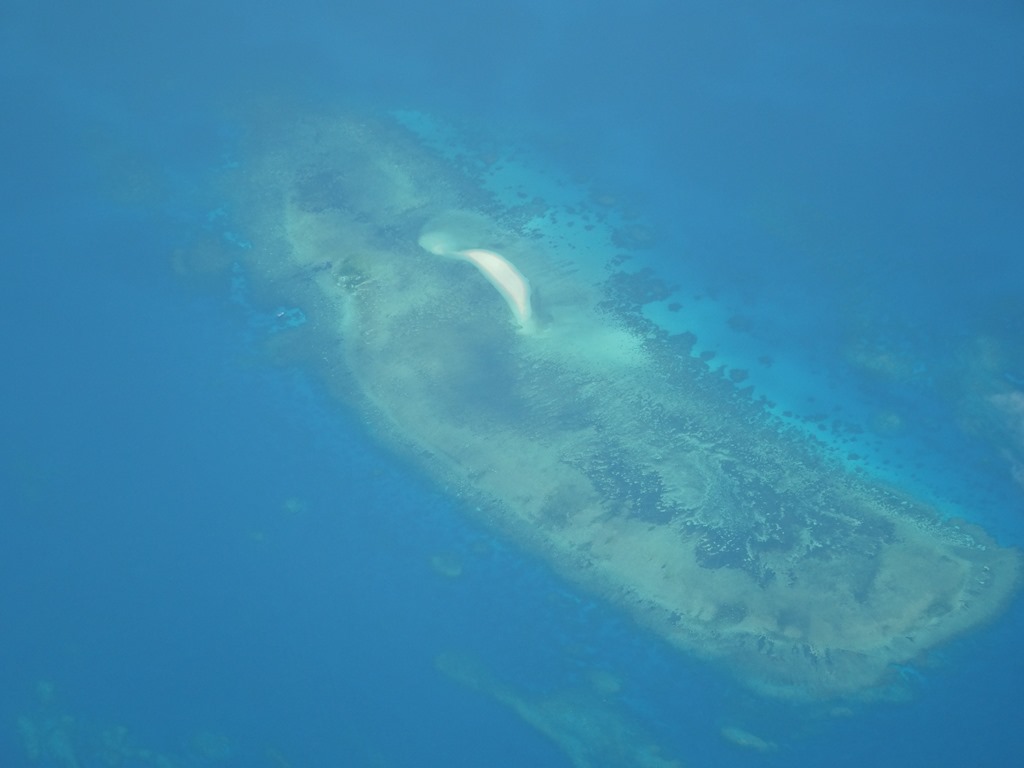 Our day snorkeling trip to the outer part of the Great Barrier Reef from Port Douglas was great, but we came to Australia’s Barrier Reef primarily to revisit one of the most memorial places and magical places we have ever visited: Lizard Island. To get there, we had to take a small plane from Cairns.

What a hardship…to spend one hour trapped in a plane with nothing to see but expanses of blue water pocked by hundreds of vivid turquoise coral heads, crescents of sand, and occasional islands popping out of the depths. Amazing scenery. Then, as we begin to descend our destination came into view; the coral reef that envelops the island, the white sand beaches, the tall ridges, the resort, and the runway. 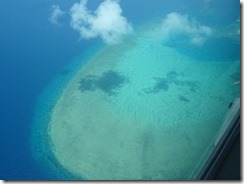 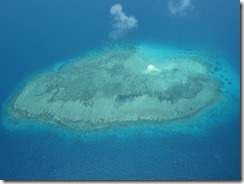 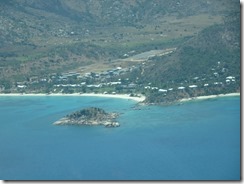 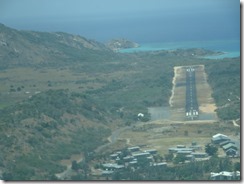 A Nice Welcome to Lizard Island

Upon landing, we took a short golf cart (the only vehicles on the island) to the resort. Once there, we were greeted with a virtually bottomless glass of champagne and then a three-course lunch, each course for which we were offered three choices. 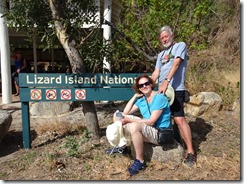 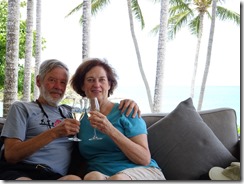 We received a short introduction to the resort’s facilities and our room. Now our primarily underwater adventure began. What is Lizard Island and why were we so anxious to return after our first trip, more than 25 years ago? Read on to find out.

Lizard Island is a reef resort that occupies a portion of the northernmost island on the Great Barrier Reef. Half the island is a National Park and the other half is devoted to an exclusive resort of the same name. When we were last here, in about 1990, the resort consisted of about 26 villas and 24 beaches.

Our memories were of walking off a beach into 80-degree water and, in about 20 yards, reaching a clam garden—giant clams, about three feet in diameter, surrounded by multiple species of coral and fishes with a range of colors that make a rainbow look monochromatic by contrast. We were enthralled by the movement of the feeding clams. Then there was the world-renowned Cod Hole, home to dozens of friendly, giant (up to about 8 feet long and 250 pounds) Potato Cod. We also loved the understated elegance of the resort and the accommodations, the food, and the casual professionalism of the staff. And then there are the lizards after which Captain Cook, who discovered the island, named the island. These creatures are up to four-feet long and wander the resort as if they own the place.

There was only one word to characterize our first experience: Magical!

For those who have zero interest in coral, giant clams, or giant cod, one can visit the spa. And the area also has some of the best deep-sea fishing in the world and is home to some of the largest, record-size, 1,000+-pound marlin.

But that visit was a quarter-century ago. Although we have been to other Great Barrier Reef islands (Heron and Wilson) since we were last at Lizard Island, we always planned to return. This was our year.

As they say, you can’t go home again as things change. This is true of Lizard Island too as the island has seen a lot of changes. The cyclone of 2014 caused a lot of the change. It devastated the resort, forcing a total reconstruction. Then, just as they were preparing to reopen the rebuilt resort, along came another cyclone the following season. This again damaged and forced another delay in reopening the resort.

The new resort is larger than when we were last there with 50 larger, but equally comfortable villas. While we still would not consider the villas super luxurious, they are spacious and very comfortable with the expected amenities of a 5-star resort (note: we booked the least expensive room. We suspect the more expensive rooms were more luxurious in addition to having private pools and better views). The open-air, central building, which includes the restaurant and the bar, is spacious, modern, very well appointed, and with lovely views from the windows and the decks. 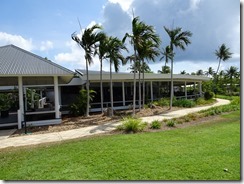 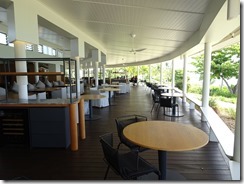 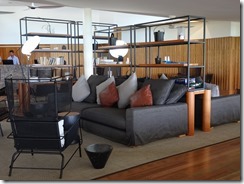 Some of the best views are at sunset, which always seems to be beautiful. So too are the views from the several kilometers of hikes, especially that to the top of Cook’s Lookout, the 1,000+-foot peak that Captain Cook climbed in an attempt to navigate the shoals that would ultimately claim his ship. (Although we climbed the peak on our previous trip, this trip was dedicated to lower-altitude endeavors.) 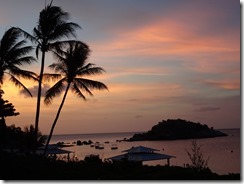 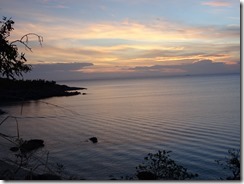 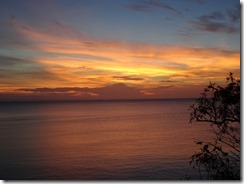 Lizard Island Beneath the Surface

The surface views are extraordinary. However, we were most interested in the views beneath the smooth surface of Anchor Bay, the bay on which the resort is located. We ignored the lovely, white-sand sunbathing and swimming beach, and headed toward the waters off of the rocky section of the coast; the home of the most beautiful and prolific coral and clam gardens. But how would this experience compare with our previous experience? More importantly, how would it compare with our idealized memory of our previous experience?

After all, the devastation caused by the cyclones was not limited to the surface. The 100+-mile per hour winds so roiled the waters that it devastated quite a bit of the reef’s coral. Such devastation can take a quarter a century or longer for nature to repair. But this is in the best of times. And these are not the best of times for the reef.

The effects of global warming are even more severe beneath the surface of the ocean than they are above. Even slight changes in water temperature cause massive changes in the underwater ecosystem. The effect is particularly pronounced on coral—the proverbial canary in the sub-surface (word for water) coal mine. Even a slight warming kills the tiny coral organisms and causes “bleaching” that turns the previously vibrant colors, a dull white. The death of the coral eliminates the rich ecosystem that develops around the coral. The fish that thrive in this ecosystem, meanwhile, move on to more promising feeding grounds. The northern section of the Great Barrier Reef, according to scientists, is Ground Zero for coral bleaching, with some sections having virtually no remaining color. We confirmed our trip only after speaking with the manager and confirming that several sections of the reef surrounding the island—including the clam garden—had experienced little degradation.

But would the island’s new underwater world really live up to our memories and our expectations?

The fast answer is yes. The high ridges that surrounded the cove had protected some of the most fragile coral from the effects of the cyclones. While we certainly saw considerable evidence of bleaching in some areas, other areas are still very healthy and have maintained their colors.

Speaking of colors, the island’s coral does not have the bright, vivid oranges, yellows, and blues of some places we have dived and snorkeled; areas such as Bonaire, Indonesia’s Komodo Island, and the Red Sea. Yet the softer, more subtle greens, blues, yellows, and browns were still beautiful. Although the gardens consist primarily of hard coral, we spied some lovely patches of soft corals, swaying gracefully in the currents. During the mornings and early evening hours, we also saw a number of types of fish. There were, of course, large numbers of parrotfish, box fish, angelfish, tangs, and a number of colorful, smaller fishes we were unable to identify. We also spotted a number of large (more than a foot in length) sea cucumbers and bright blue sea stars. We also spied some larger fish, including a few pelagic fish and rays exploring the gardens. 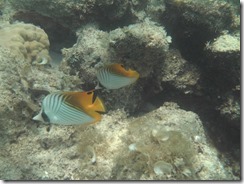 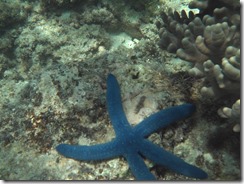 As for the clams, we saw virtually thousands of smaller burrowing clams. These clams find rocks on which to perch and secrete a fluid that dissolves part of the rock into which they burrow. As we floated above them, blocking their sunlight, the clams immediately contracted clams their large purple lips of their mantles. Better yet were the hundreds of giant clams. They have scalloped shells that are more than a meter in diameter. Their bright purple mantles are speckled with hundreds of iridescent dots. Incredible. 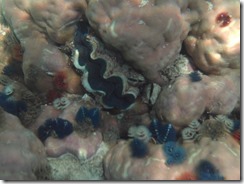 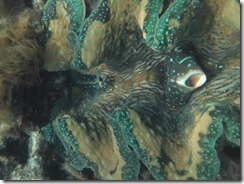 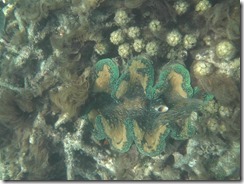 It was all that we remembered and more. We emerged from the water as happy as, well, clams.

Although we spent hours snorkeling among the coral and the clams, these waters had more than coral, clams, and fish. The island is also a nesting spot for sea turtles. Although we were not there during nesting season (which we experienced in Oman), we were told people spotted a few adult sea turtles and sharks a couple of days ago. We decided to check it out. And where better to find turtles (and also sharks) than Turtle Beach? However, the turtles are not on Turtle Beach but on one of the adjacent beaches.

So we took one of the resort’s boats to the area, anchored jumped in, and began our search. We saw a lot of lovely coral (mostly hard, but also a little soft) and also large piles of broken and dead coral, victims of the cyclones. We saw an even greater variety of fish–with wonderful coloring–than we saw at our previous snorkel sites on the island. We also saw thousands of baby tropical fish, swimming in large schools.

Better yet, we found a number of giant clams with colors that we had never seen before. One had a mantle of black and purple; another of green and orange; another of vivid turquoise. Amazing, especially when you approached them and they closed up. 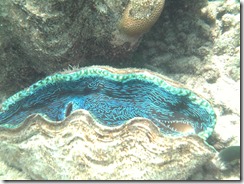 After almost two magical hours on the water, we returned to our boat—without seeing a single turtle, much less a shark. Then, just as we boarded, a small (roughly 2.5 feet in diameter) turtle appeared right off the side of the boat. We quickly put on our masks and snorkels again (no time and no need for fins in such shallow water) and spent roughly 15 minutes watching the turtle graze on the seagrass, all but oblivious to our presence. No shark (although another resort guest who was snorkeling nearby, not only saw, but claimed to be followed by a roughly five-foot shark), but a wonderful experience nonetheless. 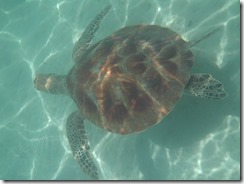 Lizard Island did not disappoint us. Maybe you can go home again!

Our next blog talks about the food and wine that we had (all-inclusive in the pricing).