We have been to London England many times. On this trip, we only had a few days there. We spent our time visiting with friends, hitting a few museums, seeing a play and walking around some of our favorite neighborhoods (and a new one, in the case of Southditch). And of course, we tried some new restaurants.

We never need additional motivation to visit the Tate Modern when we’re in London, During this trip the museum’s Olafur Eliasson retrospective provided plenty of motivation—even if that was all we were to see. Or, in the case of Eliasson, to experience. Overall, the museum visit entailed a very full day, and this was without even seeing all of the exhibits we had planned.

The Olafur Eliasson exhibit provides an overview of his work from his earliest works in the 1990s through some of his most recent installations. It showcases his work in such diverse fields as architecture, climate change and renewable energy and even cooking. All of this work is, as intended, perception-altering. He forces you to rethink the way you see and experience your surroundings through the use of colors, fog, reflections, shadows, distortions and misdirections.

You start exploring the artist’s career well before you enter the formal exhibition. Walking outside of the museum along the riverfront has his 2019, metal “Waterfall” sculpture. Once in the museum, you see his yellow-lit, “Room for One Color” elevators and his couch and sphere at the exhibition’s entrance. If you grab breakfast at the Terrace Bar, you can experience the layout of his studio kitchen. And the museum’s more formal restaurant offers a five-course, prix-fixe, low-carbon, organic, locavor menu based on Eliasson’s cookbook. (see London Restaurants section below.)

The formal exhibition begins with a display of hundreds of the models and small constructions that the artist and his team created as experiments with different geometric forms, shapes, and ratios (the artist, by the way, did study geometry). 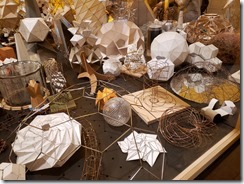 This time period proceeded the installations that harked back to his childhood experiences, especially in Iceland, where he became fascinated by the fog and the candlelight by which he read. Among the more interesting of these are his moss wall, his recreation of rain on a window and most engaging of all, his 1993 “Beauty, in which we experience white light being refracted into its constituent colors and rainbows by fog. 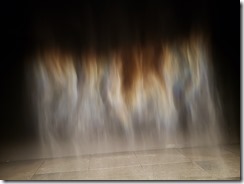 A few of our personal highlights from his 30+ later works include: 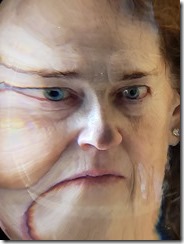 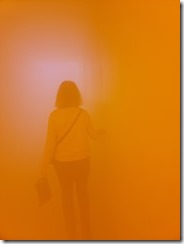 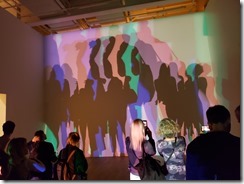 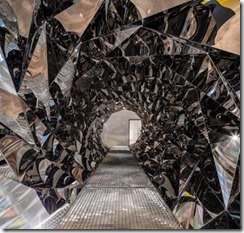 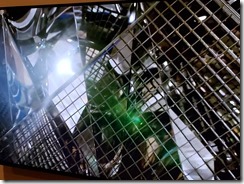 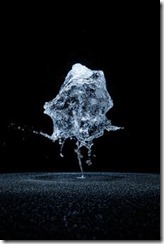 The galleries end with examples of some of the artist’s work in other fields. “Little Suns” are small, inexpensive, solar-powered lights with which people in non-electricity-served villages can work and read without the need to burn polluting and health-damaging kerosene lamps. “Ice Watch” shows photos and videos of a previous Tate exhibition that allowed people to experience the melting of glaciers and icebergs. Meanwhile, videos explain the ways in which he exposes young people from emerging countries to art and his collaboration with architect Sebastian Behmann on a range of innovative, sustainable architectural projects.

The display concludes with “The Expanded Studio” which recreates one of his studio’s collaboration tools with a corkboard onto which Eliasson and other members of his team pin articles, images, observations and questions under keywords as a means of stimulating, out-of-the-box, multi-disciplinary ideas.

We also visited dozens of the museum’s other exhibits. Among the more interesting were: 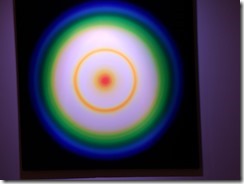 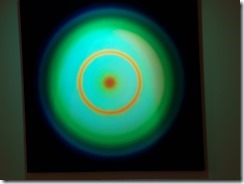 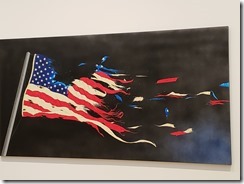 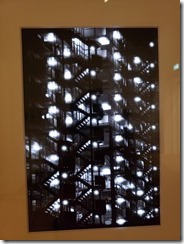 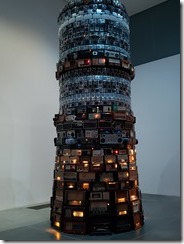 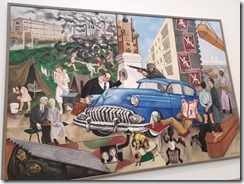 And this does not even include some exhibits in which we had little interest or two special exhibits that we were not able to see, including Takis’s exploration of gravitational and electromagnetic forces or Natalia Goncharova’s pioneering Eastern European pieces.

Nor are all the works of modern art confined to the interior museum. Olafur Eliasson, as mentioned above, has positioned his “Waterfall” near the museum’s south entrance. Non-museum-affiliated modern pieces include the floating Ship of Tolerence, a shopping mall has a display of various size plastic bottles and jugs that have been “recycled” into fancifully-painted works of art and a street “artist” provided something of a preview of the Eliason’s perception shaping and light-refracting pieces with his giant soap bubbles. 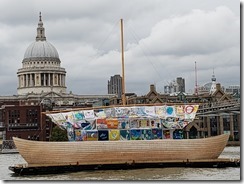 Staying in Trafalgar Square, we were literally across the street from the National Gallery. Having an extra hour and a half before meeting friends, we took a quick spin, focusing primarily on its Impressionist Collection. As always, the building, especially the ceilings of the central halls and the mosaic floors, was almost as lovely as the art. 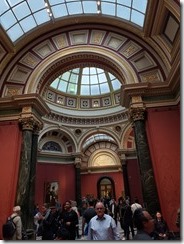 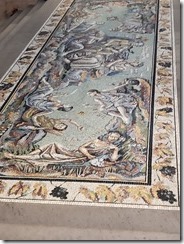 Adding to the fun—not to speak of the crowds—we visited on the day of the annual Japan Matsui Festival when the square was filled with Japanese food stands and elaborate entertainment on the main stage. 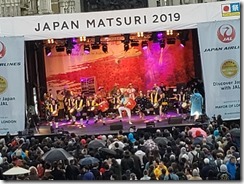 Given our late arrival and short stay, we were able to catch only one of the very few plays that were open on a Sunday night. We made it to the highly recommended, Tina—and we were glad we did.

While we were in the Shoreditch area, one of the city’s current hot neighborhoods, we went into the BeatBox entertainment complex. While it seemed to be especially popular with millennials, even us boomers enjoyed the activity, the casual atmosphere, and live music. 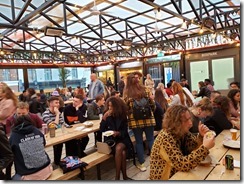