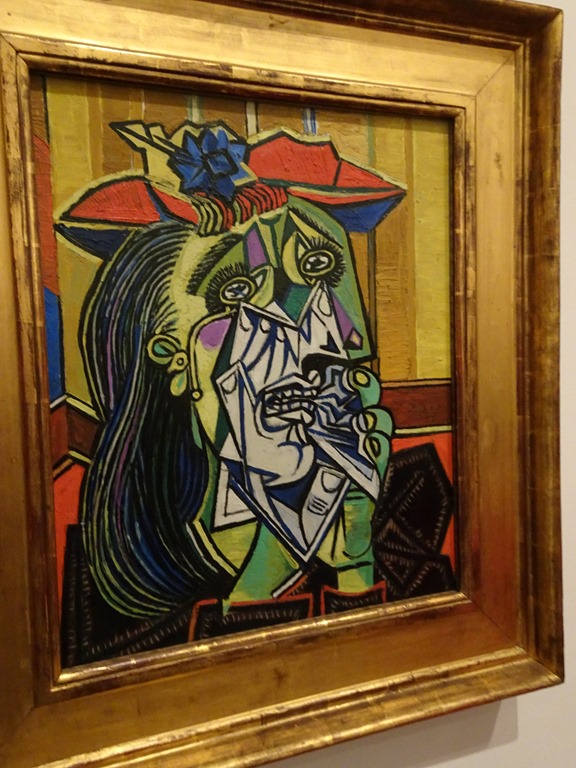 One of our favorite activities in any city is visiting museums. London sure provides a lot of opportunities to do so. this blog summarizes our visits to some of the many London Museums.

This modern art museum has been greatly expanded since our previous visit. It is now divided into two wings (Boiler House and Switch House, with a smaller “Tank” exhibition area in the basement). We continue to love the original Boiler House wing, which contains the majority of the museum’s permanent collection. Although we had some difficulty understanding the linkages of some of the works to the theme of the gallery in which they were displayed, this was at most, a minor inconvenience.

This being said, the Modern’s collection is far less inclusive than those of New York City’s MOMA or San Francisco’s SFMOMA. We, for example, saw only one major work apiece by Picasso (“Weeping Woman”) and Matisse (the four-sculpture study, “The Back”) and individual (although generally less iconic) works of many of other modern masters. Of particular note are works by Magritte, Dali, Anish Kapoor and the somewhat creepy “Chessboard”, the culminating work of Germaine Richter’s short career. 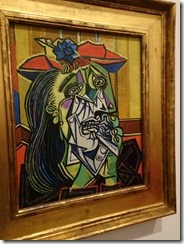 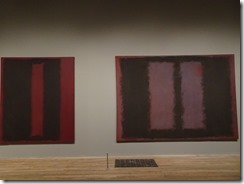 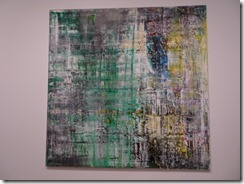 Other entire gallery representations include: 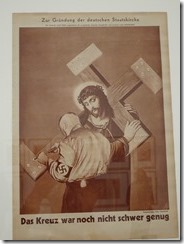 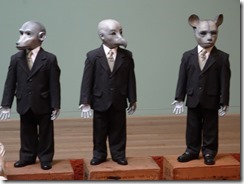 But while some galleries were devoted to individual artists, or even a single stage of an artist’s work, other galleries attempted to encapsulate an entire genre, such as Surrealism, into a single gallery. One gallery subsumed the entire Expressionist and Abstract Expressionist (represented by a single Pollock) into one small room. Others, like Pop, Symbolism and Minimalism are represented by a few pieces spread across several galleries.

The museum was also hosting three special exhibits, neither of which we visited. One was of works by Georgia O’Keefe (a number of exhibitions of whose work we’ve seen); one by Iranian political and social commentator Mona Hatoun (a retrospective which we saw at the Hirschhorn last year) and one by Indian artist Bhupen Khakhar (in whose work we had little interest. We did, however, make two final stops: One to view participate in a few participatory works in the “Tank” (in the museum’s basement) and another to visit the Switch House’s recently opened 10th floor Viewing Level.

We visited the National Gallery primarily for the late 19th-century paintings (overwhelmingly Impressionist) and then took took brief tours of the High Renaissance and Baroque sections.

the impressionist collection is small, but it does provide nice representations of work by all the French masters, plus a few examples of impressionists from other countries (including Finland, the United States and Australia) and Post-Impressionists. Among our many favorites: 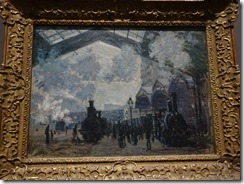 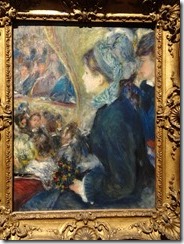 Of the more traditional works, we especially liked: 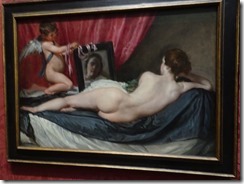 The Courtland Gallery contains a few rooms focused in Medieval, Renaissance, Baroque and 18th century European art, but its primary focus is on Impressionism, Post-Impressionism and early 20th century art. The gallery has some iconic Impressionist pieces including Cezanne’s The Card Players and Van Gogh’s Self Portrait with Bandaged Ear (from when he attempted to cut it off after an argument with Paul Gaugin).

It also contains a number of less famous, but still wonderful Impressionist works from these and a number of other artists. Among our favorites are Manet’s Bar at the Folies Bergere and Banks of the Seine at Arquenil, Cezanne’s Impressionist/pre-Cubist Lake at Annecy. 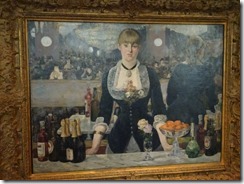 It had examples of work from all of the Impressionist masters, a few post- Impressionist works (Rousseau, Bonnard, etc.) and a number of Impressionists with whose work we aren’t familiar. There were, for example, a number of works by Rees van Dongen and Maurice de Vlaminck, and smaller selections from others including Mikhaiul Larinov, Mathew Smith and Walter Sickert. Of these other artists, we particularly liked Henri Lourens’ Woman Arranging her hair. 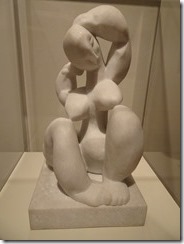 The late 19th and early 20th century collection went beyond Impressionism, as with some Fauvist works (as from Alexej Jawlemsky and Max Pechstein) and representations of other genres, as with works from Modigliani, Legar and Dufy, and even some ventures into pure abstraction.

An interesting gallery, but perhaps we have seen too many Impressionist works to be overly impressed.

The entire gallery has been taken over by “Exhibitionism”, the first international exhibition on, and authorized by The Rolling Stones. The exhibit contains more than 500 Stones’ artifacts, videos and interactive displays that cover the 50 year history of one of the most influential, and certainly one of the most colorful rock bands of all time.

The incredibly well done exhibit profiles the band’s history, from Mick and Keith’s fortuitous meeting (running into each other on a train while both were carrying blues albums and Bryan Jones’s ad for musicians to launch an R&B band), all the way through their 1,823 concerts, and still counting. And every stage and facet of their amazing run was documented with mementos of their lives and careers, commentaries by the band’s members, diaries of their exploits and explanations by many of their collaborators. The exhibition included exhibits of: 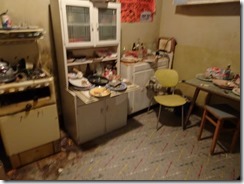 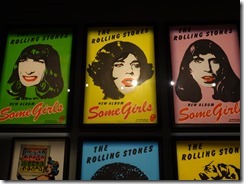 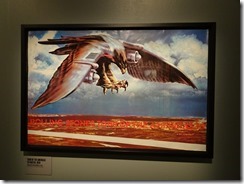 And all of this was accompanied by many rooms of music films and videos, culminating in a “backstage” tour and fabulous 3D film rendition of “Satisfaction”.

Overall, a great education as to the combination of happenstance, hard work and seamless cooperation and coordination that was required not only to create—but also to continually maintain and refresh—one of the most influential and long-running phenomena in musical history.