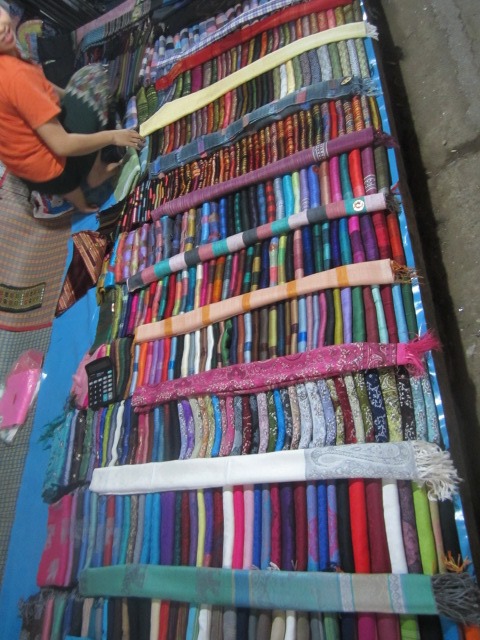 Although we weren’t particularly excited by Vientiane Laos, we were more intrigued by Luang Prabang. This  town has been a major Southeast Asian spiritual and cultural center since the 14th century and then, from the 16th through 1975 (when the Communists took over), a royal capital. It effectively fell under French colonial control from the 1860s though the 1950s.

Since the city generally survived the Indochine Wars, American bombing and Communist destruction, it was left with one of the largest troves of intact palaces, temples and French Colonial buildings in the region. Now that tourists have discovered the city, many of these structures are being restored to their original glory and many new amenities–such as luxury hotels, chef-driven restaurants and spas are being added.

Given the need to comply with airline travel schedules (planes are not frequent in this area), we only had a short visit here, arriving in the city about 6:00 PM and having to leave for the airport by 3:00 PM the following day. This immediately foreclosed out-of-town options including Pak Ou caves and Kuang Si Falls. Not a major loss since we have visited many incredible Buddhist caves and have visited virtually all (with the exception of Angel Falls) of the world’s most dramatic waterfalls. True, it would also allow us to visit only a few of city’s hundreds of remaining temples. We can live with that too. After more than three months of travel in Buddhist countries, and another month to go, we are getting Templed-out.

So how did we see–and eat at–the city’s premier spots in 21 hours–actually 11 hours when you subtract the time spent in our hotel?

Unfortunately, our 6:00 arrival forced us to miss one of the city’s premier attractions: sunset from atop Phousi Hill. Sounded interesting, but we have already had a great sunset this trip from the top of China’s Huangshan Mountain  and our last sunset venture in Bagan Myanmar was a total bust. So we didn’t loose too much sleep over missing this one.

But enough on what we missed. What did we do?

A Brief, But Wonderful Introduction

After checking into our hotel, we took an hour and a half walk through the city, particularly its business district, through the Night Market and down to the beautiful Wat Mai to watch the once-a-year celebration when the city’s cherished Pra Bang Golden Buddha (for which the city was named) was moved from the Royal Palace to the Wat for a ritual cleaning before the Buddhist New Year. (See below for information on the Palace, the Wat and the Pra Bang Buddha.)

This evening walk also set our expectations for our entire, albeit all too brief stay in this city–we love it!!!  Why?

Virtually all the buildings, colonial as well as traditional, have been renovated and meticulously maintained. The hotels and inns (including our hotel) highlight their colonial heritage. Plus, the majority of shops sell upscale handcrafted items, rather than the cheap touristy schlock sold in most tourist towns, and many of the restaurants and bars were clean, comfortable and inviting. It kind of reminded us of Georgetown, Washington DC….upscale, and well cared for.

Even the Night Market was orderly, upscale and comfortable. While most vendors sold the same types of items, they were more upscale than at most markets we have visited. Moreover, the vendors set their wares neatly on the sidewalks, leaving the entire main street open for pedestrians to walk and browse without being shoved together in narrow passageways in which they are forced to walk in many night markets. Noone was screaming at you to buy their stuff. Everyone was very polite. 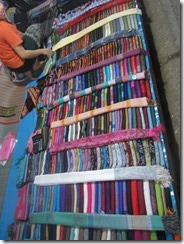 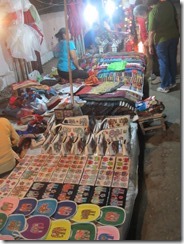 All so civilized. And yes, all so gentrified. The city, which actually has more of a feel of a comfortable town than a city, is becoming a bit too perfect and certainly too expensive for many people to live. But even our cab driver gushed enthusiastically and proudly about life in in the city.

A Busy But Rewarding Day

Morning comes early in Luang Prabang, starting around 6:00 AM with a morning alms walk, where hundreds of barefoot, saffron-robed monks walk the streets in long lines, with open offering pots to receive food (especially sticky rice) and other offerings from residents and tourists lined up on their knees, to provide it. Although this solemn ritual has turned into a tourist show, with some photographers insisting on jumping into the middle of the procession to get the perfect shot, it is still a humbling experience: Watching barefoot monks humbly accept offerings from kneeling locals, including many poor farmers who drive or paddle their boats into the city before dawn to pay their respect, and donate their own food to the monks. 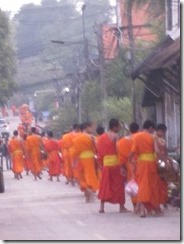 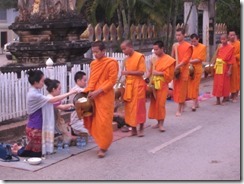 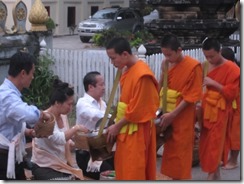 Then, after returning to our hotel for breakfast, we were treated a thunderstorm which scotched our plans to eat breakfast at our hotel’s lovely riverside terrace overlooking the Mekong River. Imagine having to begin a day in paradise by being forced to eat inside, without a view. But the rain quickly subsided and we rushed to see and do all we wanted in town, before having to leave for the airport. Our visit included:

One of the interesting things to do is to buy birds imprisoned in a small cage and then release them for good luck. Unfortunately, the birds flew away faster than Tom could take the picture. But you get the ides. 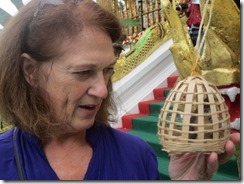 All went as planned,except for one small thing. The museum, in which we planned to spend much of the morning was closed for the holiday. So much for seeing how Luang Prabang royalty used to live. But in the end, even that disappointment had something of a silver lining. Some San Francisco friends just happened to be in town at the same time so we were able to catch-up and share travel tips such they had just left our next destination (Hanoi) and we had recently left their next destination (Chiang Mai).

For such a small town, we had some great food—especially at Tamarind, which was recommended by our hotel, was a wonderful find. Fortunately our hotel made us a reservation as those without one were being turned away. We chose the restaurant’s Set Dinner for two as a mean of tasting as many different Laotian dishes as possible. Boy was it good.  The meal began with bamboo and vegetable (primary pumpkin, eggplant mushrooms and holy basil) soup. Followed by a sampling of several appetizers (Luang Prabang sausage, dried water buffalo meat, dried seaweed, relishes and three dipping sauces for sticky rice–tomato, chili garlic and eggplant). Savory dishes consisted of lemongrass stuffed with chicken and herbed fish steamed in banana leaf. Finally, for dessert, a bowl of sticky purple rice with coconut milk and tamarind sauce topped with shredded coconut.

Did we love all the dishes? No. The relish and the eggplant dip were at the bottom of our lists. But even with our different tastes, we both loved the sausage, buffalo, fish, chicken and the dessert. We haven’t agreed on so many dishes for a longtime.

Coconut Garden. We met our San Francisco friends here for lunch and ended up sharing about six dishes (including sun-dried water buffalo, pork sausage, steamed river fish and herbs in banana leaf, pork stew and stir-fried chicken)–not to speak of three bottles of wine (we are, after all, from San Francisco). As for the food–we’ll take Tamarind. To our tastes, none of the dishes compared. Still, good company, good wine and decent food

Our hotel was another wonderful boutique hotel that was located within walking of most of our activities. The room had a mixture of traditional Lao and contemporary design, all in a comfortable setting. Although it seemed a little expensive for the area, it was comfortable and clean. 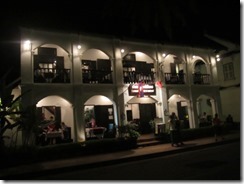