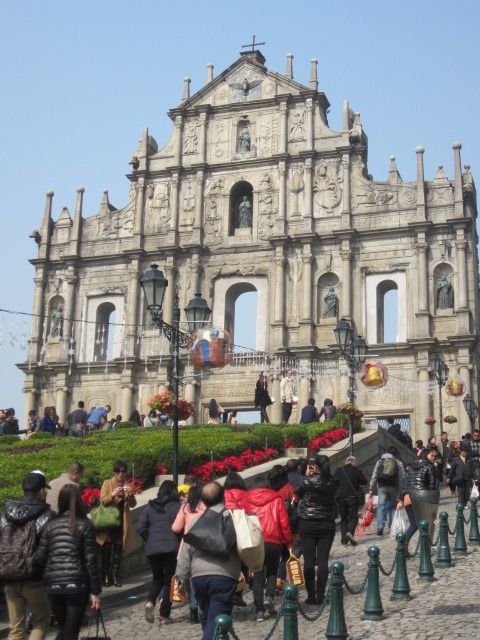 While Hong Kong is a very young city, Macau is relatively old. It was already an established town when the Portuguese first discovered the Pearl River Delta in 1515 and established their first settlement between 1553 and 1557. The Portuguese brought Jesuit missionaries as well as trade to the island and established a productive relationship with the local authorities and increasingly the Chinese Emperor and his court.

This resulted in a body of colonial buildings that the city wisely preserved. Unfortunately, this colonial heritage and preservation did not result in economic growth. The city remained a relative economic backwater compared with Hong Kong until a fateful mid-1990’s decision by the still Portuguese administration, to use its colonial attractions as a foundation on which to establish the island as an Asian gambling center. This attracted major hotel and casino operators and brought in enough money to fund civic improvements. By the time control of the island reverted to China in 1999, the Chinese decided to leave well enough alone and allow Macau, like Hong Kong, to operate relatively autonomously.

The result is today’s Macau, a perpetually crowded tourist destination that is melding an historic core, an extravagant, high-glitz casino empire and a traditional Chinese community into a high-fashion commercial district full of glamour brands and streets in which Chinese, Portuguese, French, Italian, Malaysian and American fast food restaurants exist side-by-side.

We had to see such a place.

We began our short, abbreviated day trip with a one-hour hovercraft trip from the Hong Kong to the Macau ferry terminals and a short taxi ride to the historic core of the city: the ruins and beautifully preserved facade of 18th-century St. Paul Cathedral and the reconstructed fortress (originally built between 1617 and 1626) that housed the original Portuguese settlement. As a testament to the relationship that the Portuguese had established with the Chinese, all of the fortresses cannons faced outward toward the sea. None were pointed toward the mainland. 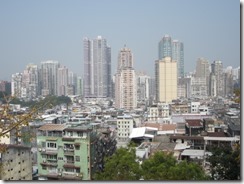 Although the views from the ramparts are a bit skewed by the persistent reclamation of land and the growth of high rises, it is impressive nonetheless.

The fortress is interesting in itself, but it is even more interesting for what it contains: the wonderful Macau Museum. The high-quality, very well described (in Chinese, Portuguese and English) exhibits examine the history of Portuguese maritime explorations, its progress from Africa, to India, Indonesia, China and to Japan and how it used this exploration as a foundation for building global trade networks and for spreading Christianity through Jesuit missionaries. It explained how they became accepted by and advisors to the Chinese Court and Emperor and helped the Chinese build new industries.

The exhibit begins either parallel comparisons of Chinese and Western civilizations, as in their philosophies and religions, their organizational and administrative practices, their scientific, mathematical and technological innovations and their exploration and trade patterns. It maintains this parallel track by comparing Chinese and Portuguese lives and cultures on the island and how they converged into current day Macau.

We then made our way down the packed alleyways that led from St. Paul’s to Sentado Square, the home of the original colonial Senate building (now a municipal government Building) and a a number of other beautifully restored colonial buildings. While the entire square (all decked out for Christmas when we were there) is lovely, the original senate building is the most dramatic and well preserved. It has a beautiful blue and white tiled entry way (in which a band was playing) leading to an open courtyard. The building also houses an exhibition space that, when we visited, housed an exhibit of three-color glazed Tang Dynasty sculptures. 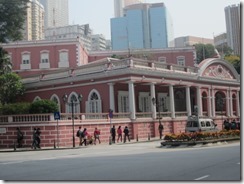 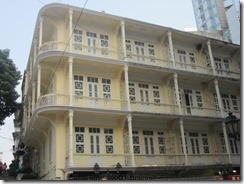 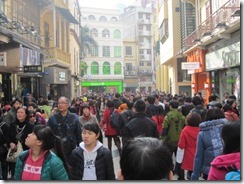 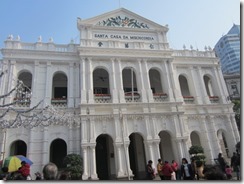 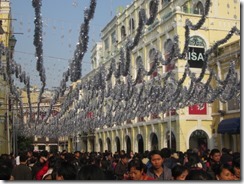 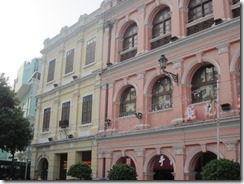 Although we wanted to visit a number of other historic sights, including the Old Protestant Cemetery, the Moorish Barracks (a neoclassical building with Mughal design elements) and the A-Ma Temple (designed to support Buddhist, Confucianist,Taoist and a number of local religions), we had other things to do before we left.

We, for example, also wanted to get at least a brief look at some other parts of the city, some that retained some of their colonial buildings and others that have been transformed by casino money. Avenida de Praia Grande used to be the elegant waterfront boulevard, before land reclamation resulted in part of it being well inland. It does, however, still retain some nice colonial buildings.

We wanted to sample some of the dishes that that were brought to Macau by the Portuguese and became incorporated into the regional culture. Although our first choice, the Portuguese Restaurante Platao was closed, we did find Portuguese-inspired cuisine at the Now Cafe. Lunch included the classic bacallhau (dried, salted cod) stir-fried with potato and egg and clams that were advertised as being in a Portuguese sauce, but were actually in white wine and garlic sauce. Not exactly the meal we had planned for, but not bad.

Casinos and the Future of Macau

Casinos now dot the entire downtown area. Although we decided to pass on Sheldon Adelson’s Macau representation of his Las Vegas representation of Venice (the Venetian Hotel and Casino), we did go by a number of others such as the Wynn, the MGM Grand and the Star World. Although all were huge and to us, out of place, they paled in the shadow of the biggest, tallest and most garish of all–the Grand Lisboa Hotel and its older, neighboring across the street) casino. It now dominates the city skyline and, for better or worse, appears destined to become something of city icon. 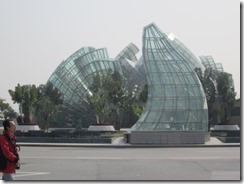 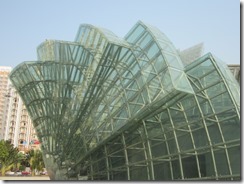 Meanwhile, a symbol of what casino money has brought to the city architecture sits in a square between the Lisboa and the Wynn. Some type of large. modern glass structure has been built in the center of the circle. While the park was totally vacant of people in an otherwise packed area of the city, we did manage to find a door into the structure. When we entered, we found a four-story circle, surrounded by central balconies, serviced by glass elevators that looked down into a large pool of water. Clearly, an interesting and expensive concept. But the structure (I hesitate to call it a building), like the park in which it rests, was totally vacant. Not a single office or store and not a single person (other than us) in the entire stricture. And since there was no one to ask what this structure was, or was intended to be, we left Macau puzzled–not only by the structure, but by the future of Macau.