Our next stop in Michigan was Mackinaw Island. But first we had to cross the Mackinaw Bridge that links the upper and lower Michigan peninsulas and go through Mackinaw City.

The bridge, which at 8,614 feet, is the third longest suspension bridge in the world. It will sway up to 35 feet from side to side in strong winds. While the legal and financial challenges to its construction was daunting, it was completed in in 1957, after a three-year process that cost five men their lives. 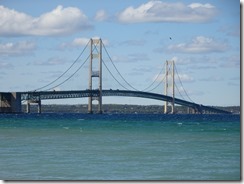 Located at the southern end of the Mackinac Bridge, Mackinaw City was effectively created as a tourist town (primarily a as gateway to Mackinac Island) in the 1820s and 30s. It exploded after 1881, when it became the terminus for the first trains from southern and central Michigan cities. This also established it as a transit hub, when iron and timber-bearing trains along the Upper Peninsula, met special ferries that carried rail cars across the Mackinac Strait to connect with southbound trains from Mackinaw city. Since the strait iced up for more than four months a year, it welcomed the introduction of the first icebreakers, which maintained transit through most of the winter, until completion of the bridge.

Today, Mackinac is a classic tourist city, especially as a transit point to Mackinac Island summer resorts. It has theme parks and its streets are lined with dozens of fudge, candy, popcorn, tee-shirt and Michigan sports souvenir shops. 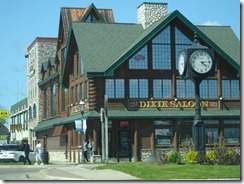 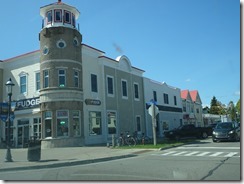 Audies Chippewa Room was the site of our one dinner in the city. Its fried smelt (with lemon, dill tartar sauce) was, as advertised, lightly breaded and lightly fried. We had two lightly breaded, lightly sautéed entrees. Yellow Lake perch and some of the largest frog legs we have had. All were good, as was our 2016 Mt. Beautiful New Zealand pinot noir.

After pleasant night at the lovely Brigadoon Bed and Breakfast, we took a morning ferry to Mackinac Island for couple days of R&R from our busy travel schedule. 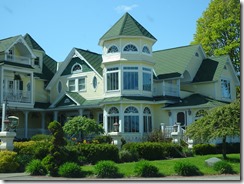