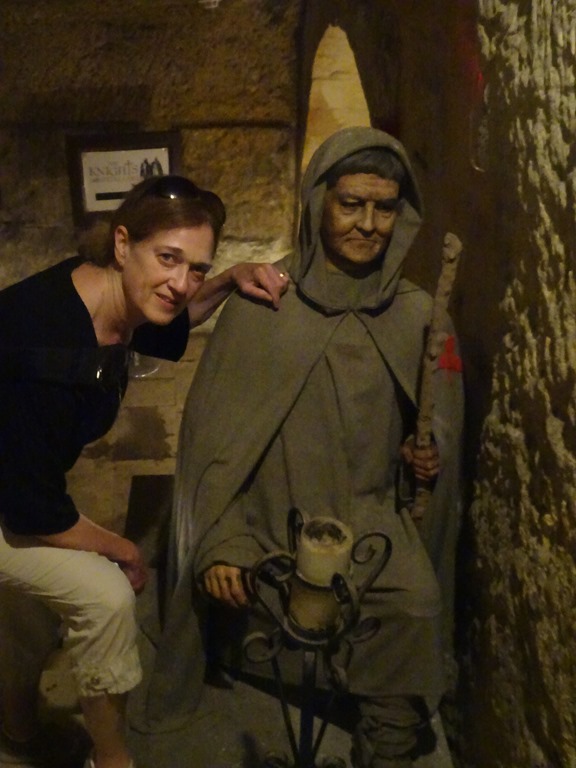 Our last Malta blog provided a number of partial mentions of the role the Order of Saint John of Jerusalem played in the history of Malta. The War Museum, as mentioned above, provided as partial explanation of this role. Visits to The Knights Hospitallers Museum and, to a lesser extent, the Grand Master’s Palace and Armory and St. John’s Co-Cathedral provided complementary, and in the case of the former, more detailed explanations of the Knights and the roles they played from the end of the 11th, through the beginning of the 19th centuries.

The Knights Hospitallier, whose formal name is the Sovereign Military Hospitaller Order of Saint John of Jerusalem of Rhodes and of Malta, was a military order and hospital that is more commonly known as the Knights of St. John or the Knights of Malta.

Whatever you call it, it was a medieval Catholic military order and hospital that dates back to the mid-11th century when the Caliph of Egypt granted the monastic community of The Order of St. John of Jerusalem the right to create a hospital to protect, serve and when necessary, nurse the city’s religious pilgrims. In 1099, when Christians captured the city in the First Crusades, it was recognized by the Pope. When Jerusalem was retaken by Islamic forces, it moved to the island of Rhodes, where it was recognized by Emperor Charles V as a sovereign who could continue the long struggle against Muslim infidels.

When they were again displaced, and largely exterminated by Muslims, they moved to various places in Europe until 1530, when Charles I of Spain granted them sovereign rights over Malta, Gozo (an island that is now part of the country of Malta) and the North African port of Tripoli in exchange for an annual tribute of one Maltese falcon per year.

The Ottoman Muslims, however, contested a Catholic sovereign—even one whose objectives were to bring medical care and comfort- in these areas. They raided and captured Gozo and left the Knights, under Grand Master Jean Parisot de Vallette, to defend Malta. Although they ultimately lost one of their remaining strongholds (Fort Elmo), their resistance so weakened the Ottomans as to eventually force them to out of Malta. Left uncontested, the Knights protected themselves by building one of the one of the strongest navies in the central Mediterranean.

This allowed them to focus on their primary mission of caring for and nursing. They created the Sacred Infirmary (now the Knights Hospitallers Museum) initially with 500 beds. The hospital continually expanded over the years and the order provided what was then state-of-the-art care to anybody who needed it. Although Knights of the Order did receive special treatment, the hospital took in and provided relatively equal care to all—locals and foreigners, rich and poor and those suffering from all types of illnesses and injuries, including epidemics and plagues. It attracted, and eventually created doctors with international reputations, pioneered new treatments and was increasingly recognized as one of the best hospitals and medical centers in the world.

The Order continued to provide these services until Napoleon captured Malta and converted it into a military hospital to care for French sailors and soldiers. The British continued to use the facility as a medical hospital and, by WWI, as discussed above, Malta had 27 hospitals and more than 20,000 beds where they treated all sick and wounded Allied troops—a total of more than 120,000 men throughout the war.

The museum was quite interesting to visit and also included the ability to walk through some of the tunnels that were built to protect the people during the various wars. 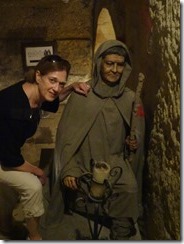 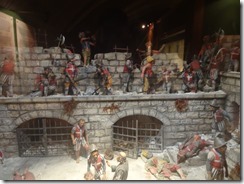 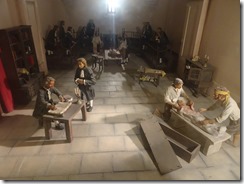 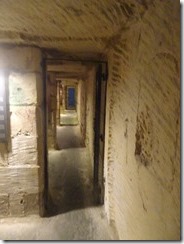 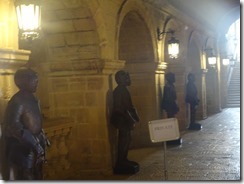 The palace was built between the 16th and 18th centuries to House the Grand Master of the Order of St. John and the government of the sovereign state. It now plays a similar role by housing the offices of the nation’s President.

Conceived in 1566 as the centerpiece of the newly designed city of Valletta, it was continually expanded and enhanced under various Grand Masters. Although the exterior is austere, the interior, especially the State Rooms, are luxurious and filled with art from masters. Among the highlights are the: 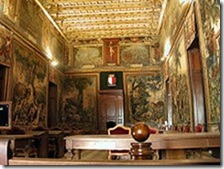 When we visited, the halls were also displaying an exhibit of close to 100 sketches in which Cubist pioneer, Pablo Picasso portrayed women in very personal and sensual ways, and almost 50 oils in which Surrealist pioneer Jean Miro took a distinctively more conceptual approach.

The Amory, which is also open to visitors, provides a very different experience. One room is filled with what is claimed to be one of the most comprehensive and valuable collections of European armor, including a finely crafted, highly decorates suit for one of the Grand Masters (A lof de Wignacourt). The other has an equally impressive display of various generations of weapons, from swords, rapiers, pole weapons, crossbows, pistols, rifles, cannons and mortars). 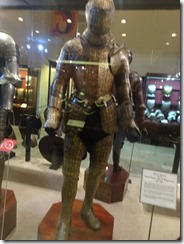 St John’s Co-Cathedral (co-equal to that in Mdina), which is dedicated to John the Baptist, was the primary church of the Order of St. John. Constructed from 1572 to 1577, its exterior is quite austere. 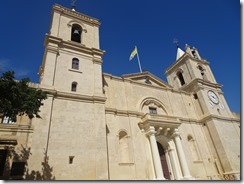 The interior, by contrast, is lavishly Baroque. Funded largely by Grand Masters, wealthy knights and other noblemen, it rivals some of Rome’s cathedrals. It has intricately carved stone walls, painted vaulted ceiling and chapel altars that portray scenes of John the Baptist. The crypt, meanwhile, contains tombs of several Grand Masters.Among its most impressive features are its: 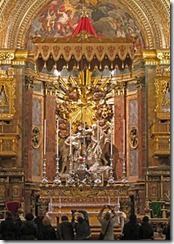 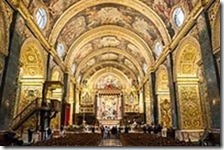 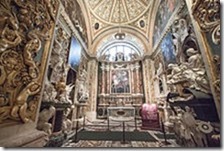 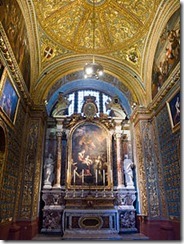 And this does not even begin to account for the art that was specifically commissioned for the Cathedral; pieces including Caravaggio’s Saint Jerome Writing and especially, his masterpiece, The Beheading of Saint John the Baptist. 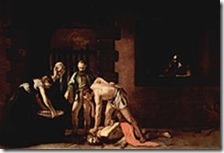 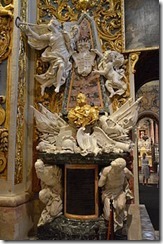 Auberges are essentially the communal houses in which knights from a particular state or region lived while they were in Valletta. Some of these such as those of Italy, Aragon, Bavaria and especially Castile (which one Grand Master renovated for his own use, and is now the Prime Minister’s office, are pieces of art in and off themselves. 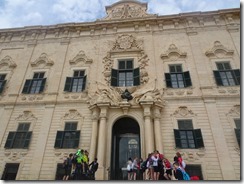 Fort Elmo, which commands the entrances to both of the city’s harbors, began in 1488 as a watchtower. After a 1551 Ottoman raiding party entered one of these harbors unopposed, the Order of St. John began constructing the fort.

The fort was first tested in 1565, when the Ottomans returned in greater force to mount a 28-day cannon siege. While the fort eventually fell and its defending knights were killed, the defense against the “Great Siege of Malta” bought enough time to allow neighboring forts to be secured and provisions and convinced Europe (especially Spain) of the need to reinforce Malta as protection against, and eventually expel the advancing Muslim forces. 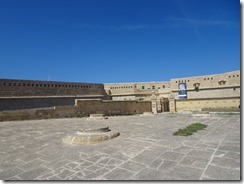 This contains some of the city’s most poignant memorials to its past. The Siege Bell Memorial remembers the valiant struggle and the sacrifices of those who held off the Ottomans until the island’s other defenses could be fortified. The Lower Barracca Gardens reinforces this with green space and a place for reflection. Further down, the Upper Barracca Gardens provides for both remembrances and reflection, this for the sacrifices, perseverance and losses during the Second World War, with not only monuments and gardens, but also with visits to the underground bunker from which WWII planning was conducted. This includes the spot where Eisenhauer and his staff planned for the invasion of Sicily, which would be launched primarily from Malta. 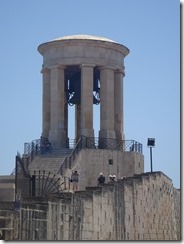 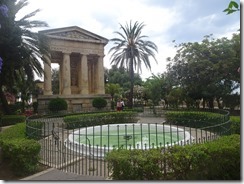 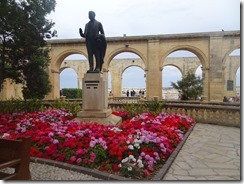 And to top it off, the entire harbor front provides a stunning, elevated view over the harbor and the “Three Cities” that lie on the other side (discussed in a forthcoming blog)

Valletta is laid out in a grid of one-way streets and alleyways lined with three-to-five story limestone buildings, many of which are graced with balconies. Many of these are framed in wood, have windows and serve as extensions to rooms. Some are brightly painted in ways that liven up the street and others are distinguished with ornately carved support structures. Other buildings make statements with wither front doors, as with huge, round, door handles ands ornate knockers. 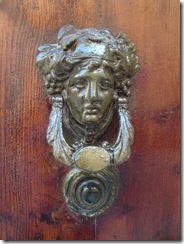 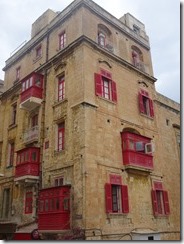 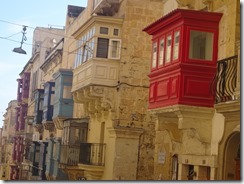 While many streets are primarily, or even exclusively residential, some have many commercial, first-floor storefronts and many restaurants take up half the street with outdoor, café seating.

Meanwhile, Via Republic, the city’s primary commercial street, is a wide pedestrian street that is almost totally devoted to stores. While it, like virtually all other streets, maintain a traditional, relatively austere Baroque appearance, there are a few exceptions. Via Republic’s Parliament Building, for example, is almost jarringly modern. So too is a block-long, largely glass-lined food court. These, however, are exceptions that tend to highlight, rather than detract from the pleasant symmetry of the city’s streetscape. 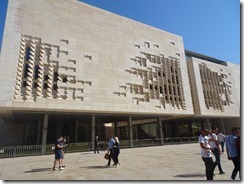 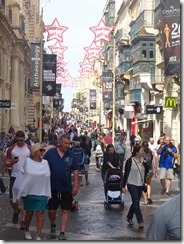 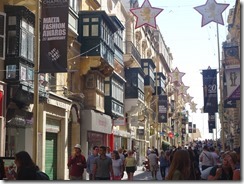