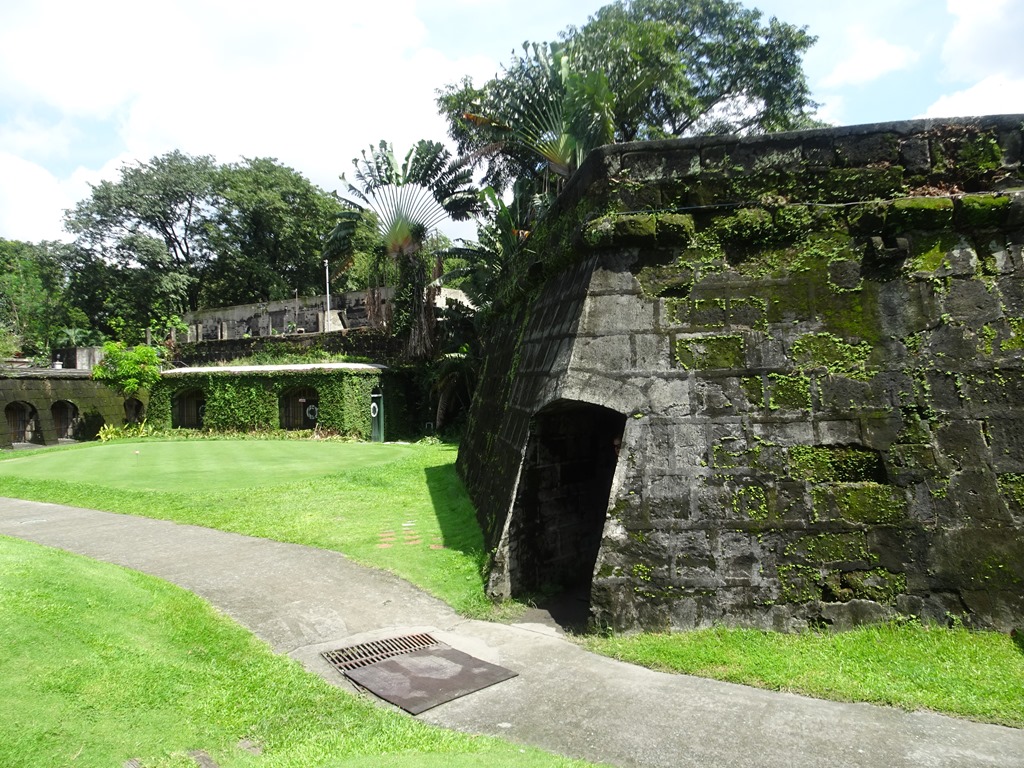 Manila, the largest city and capital of the Philippines has only a small percentage of the population (1.8 million) of the metro area of about 13 million. However, it seems to have about 20 million cars—all of which are out at the same time causing immense traffic jams.

Manila is not a tourist mecca. It has few sights, many of these are spread out. Given the traffic, it can take a long time to travel among them. Since we had only two days in the city, we focused on a few of the city’s highlights. Intramuros was the primary, and most important among these.

This old, Spanish walled city was originally constructed in the late 16th and 17th centuries. The partially preserved/partially reconstructed stone walls and fortifications remain one of the best preserved Spanish city fortresses in the world.

Although the walls, and many of the original buildings were constructed in this period, the city and neighborhood has endured multiple earthquakes (1599, 1600, 1621, 1645, 1751, 1863 and 1880), assorted fires and typhoons. And this is not even to the mention the destruction of large sections of the city in the 1945 Battle of Manila, when Allied forces finally evicted the Japanese. (Sounds like some type of powerful message!

The “city” consisted of several sites: 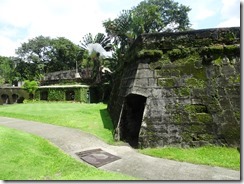 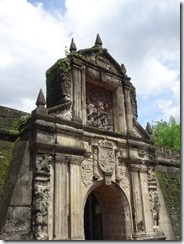 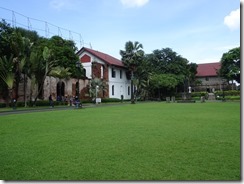 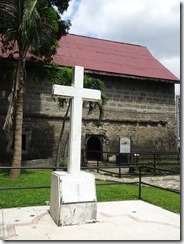 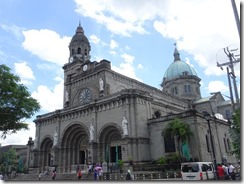 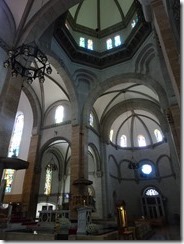 The district also has a number of other interesting, albeit less historic sites. Among these are: 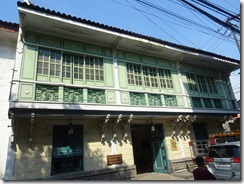 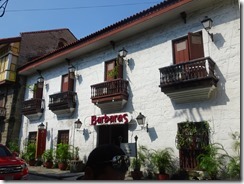 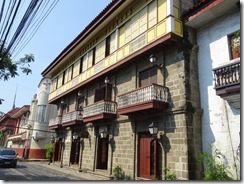 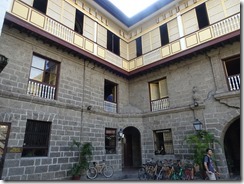 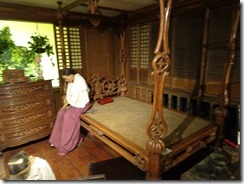 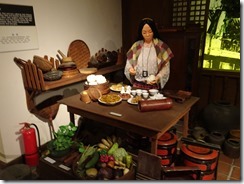 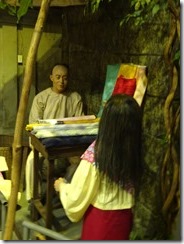 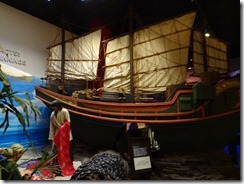 China’s, beginning from the very settlement of the island when Southern Chinese crossed that was then a land bridge. Trade between the lands began in about the 10th century (particularly around ivory), well before the Spanish. Trade and immigration dramatically expanded as Manila flourished during the Colonial period’s “Galleon Trade” and grew into one of the most prosperous cities in the world.

China traded ivory, silk, porcelain and spices for Spanish silver and Chinese ship owners, merchants, craftsmen and artisans moved to the islands to seek their fortunes. They, as explained and portrayed in dioramas, opened retail shops (especially on the first floors of their homes), worked as gold and sliversmiths, tailors and seamstresses, cobblers, carpenters and printers. Chinese, Filipinos and Spanish began intermarrying, creating a blending of cultures, schools and even religions.

The Spanish, however, soon began scorning, harassing, taxing and segregating the Chinese into ghettos. Filipinos too began facing persecution. By the late 19th century, the more wealthy of mixed-blood (combinations of Chinese, Filipino and Spanish) “Mezfizos” returned from foreign universities with ideas of equality and rebellion against their Spanish oppressors. Some, most prominently Jose Rizal, promoted the ideals. Others (including the Katripuneros secret organization) promoted armed resistance and others financed efforts to overthrow the Spanish.

By 1898, the Independence movement took hold. Although it was suppressed, the Spanish American War resulted in Spain relinquishing control of the Philippines, not to speak of Cuba, Guam and other lands) to the U.S. Philippines briefly declared independence and elected a President. The U.S., however, was not ready to endorse independence and relations between the counties deteriorated into another war which ultimately ended with a quasi-truce under which William Howard Taft instituted a plan for the Philippines to create its own government, under the auspices of the U.S. This gradually (under Woodrow Wilson) evolved into a plan under which it would eventually (in 1946) gain independence.

This, plan, of course, was short-circuited by Japan’s surprise, December 8, 1941 attack on Clark Air Base, America’s primary military base in the Philippines.

We also visited the National Museum, at least to the one of the two lovely, former Legislative Chambers that was currently open. This a grand building was originally designed as the national public library, and later as the site for the country’s 1934 Constitutional Convention and the National Senate. The museum has a lovely collection that is divided into about a dozen galleries.

It begins with a story of ivory (the product that fueled trade with China both before and during the Galleon trade) and then to the “Wreck of the San Diego, a huge Spanish Galleon that went down and which was eventually salvaged to retrieve about 5,000 artifacts including its anchor, guns, instruments, Chinese porcelains and hundreds of stoneware jugs that originally held supplies for the 450-man crew. Other exhibits include one of Spanish metal products (especially Lantaka, or small, revolving cannons), exhibit of the works of the country’s National Living Treasures (a combination of wood carving, metal working, weaving, textiles, paintings, etc.) and those devoted to Islamic art, fashion and customs, to ancient scripts (especially of the islands’ 8th-12th century syllabic writing), to basket and mat weaving and to textiles (materials, technology, techniques, artistry and their role in ethnic identification and lifecycle rituals). 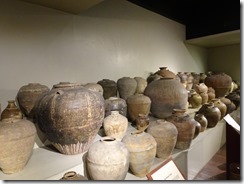 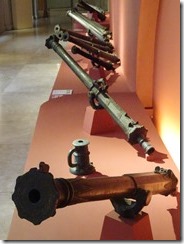 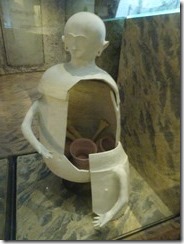 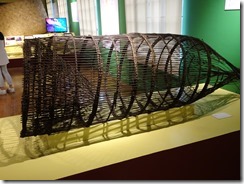 One gallery focused specifically on the country’s archeological treasures (with a particular focus on burial images and pottery from about 2,000 years ago. Another specifically on the critical role of and ritual underlying the production of rice, which looked at different strains of rice, planting practices and cycles, the pests that threaten crops and a particular focus on the challenges posed by climate change and the dangers of overreliance on only two species of the grain.

Although many of the individual galleries are interesting, they are presented in such discrete segments that each gallery is presented as a separate piece of the country’s history or culture. There is, unfortunately, no connective narrative to tie all its discrete pieces together into a meaningful “story: of the Philippines and its people. This being said, some of the exhibits were indeed impressive.

Malls are among the city’s most popular meeting spots, presumably as a means of escaping the oppressive heat and the humidity. They are interestingly, among its most popular of the city’s tourist destinations. This is presumably due to a lack of other attractions and the availability of free shuttle buses from many tourist hotels and popular tourist spots. In fact, when we asked the best way to find a taxi from the boat that brought us back from Corregidor to our hotel, we were advised to board the free Mall of Asia shuttle to the mall’s own transit hub, at which buses and cabs are always available. Although we normally have no interest in malls, since we had to go there anyway, we decided to take a spin through this huge facility with over 100 stores, plus kiosks and entertainment facilities including cinemas and a carousel. 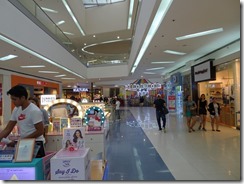 Another city “attraction” which we planned to take advantage of. But, since we had such a great view of the sunset from our hotel room window, we decided that it would be more comfortable to toast the sunset with a glass of wine in our air conditioned room, rather than venture out in the still uncomfortable heat and humidity. 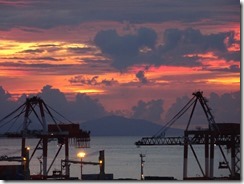 There is another sight (in contrast to “site”) that could not be ignored in Manilla—a level of security that we have not encountered in our travels since we found ourselves were in Moscow during the 1991 coup. National police and machine and shotguns were everywhere and every hotel and public facility required all bags and visitors to be screened (although enforcement was notably lax for Western white visitors). This is ostensibly due to the fact that some southern sections of the country have been placed under martial law to counter Islamic groups who “spread evil ideology of terrorism and to free the people of Mindanao from the tyranny of lawlessness and violent extremism.” But why in Manila?

Critics contend that the extension of martial law is being used primarily to enhance President Duterte’s already extensive authoritative powers under which he is continuing a practice he honed as city mayor in which he has been accused of effectively sanctioned vigilantism and extra-judicial executions of suspected criminals. Although we don’t pretend to know the truth, those few people with whom we felt free to discuss the issue, appeared to believe the measures were justified. But justified or not, the degree of security was certainly striking.

The foods began with expensive and high-quality ingredients (lobster, Moreton Bay bugs, giant prawns, prime rib, rack of lamb, etc.) and a number of interesting, and often quite good presentations. And the buffet is accompanied with extensive service from a literal army of people to answer questions, recommend and assemble dishes, bus tables, serve wine and attend to other needs. We were generally very pleased with our breakfasts and out two dinners, other than for the regular difficulty of getting tea in the morning and wine in the evenings.

But at a cost of only $60 per person—not to speak of a 30 percent discount on both food and wine for hotel guests—the buffets were generally too good, and too good a deal to pass up. 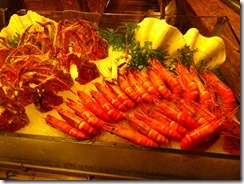 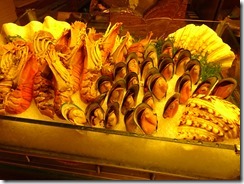 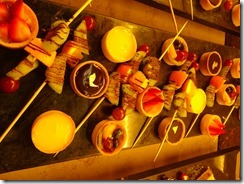