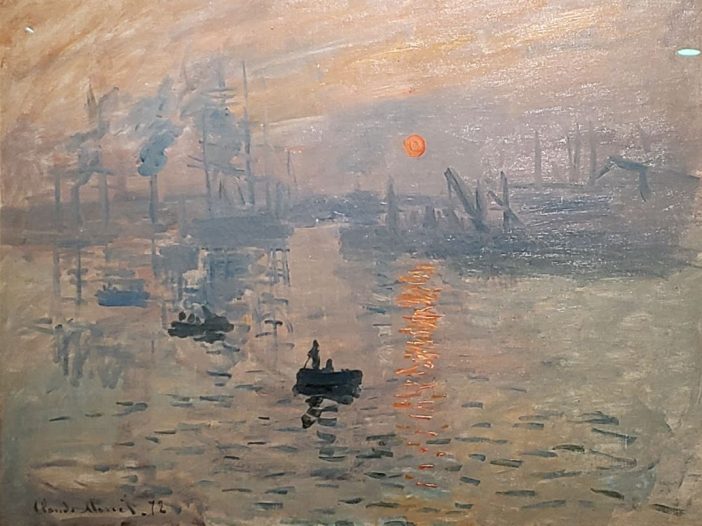 While the rooms, the furnishings, and the religious art are certainly worth seeing, it is the museum’s Impressionist offerings—especially the largest collection of Monet and Morisot works in the world—that makes it one of our favorite Paris museums.

First Claude Monet’s son gave the museum a large donation of Monet’s house in Giverny and the family-owned canvases. In addition to a number of the painter’s own works (especially from his Giverney period with pure, deep colors and abstracted subjects that were not his favorite works), the donation included works by a number of other Impressionists. The museum claims to contain the world’s largest collection of Monet works. Among its permanent collection are some of Monet’s most famous works (Rouen Cathedral, Houses of Parliament, and a number of his waterlilies series).

And it also has the most beautiful Monet we had ever seen: his 1872 painting: Impression Sunrise. This painting, on its own, keeps us returning to the Marmottan.

Then came a donation from the heirs of fellow-Impressionist Berthe Morisot. Many personal paintings of Morisot’s family are on display (especially of her daughter as she grew up). The museum claims to have about 100 of her works in various media.

Nor is it just the number of works from Monet and Morisot that makes the collection so special. There is a draft oil of Caillebotte’s wonderful rainy Paris street scene. It portrays the entire scene, without details, such as the character’s clothes or their faces. And let’s not forget works from Renoir, Sisley, Pissaro etc.

One of our visits coincided with a special exhibit on Piet Mondrian. We have seen many of Piet Mondrian’s geometric compositions. However, we had not seen his earlier “struggling artist” phase when he was reliant on the commitment and funding of one patron, Salomon Slijper.

The exhibit traces the path of an artist trying to find his voice. It begins with some of his early, somewhat abstract landscapes. Even at this very early stage, he focused more on lines and atmospheres, using a muted palette to convey impressions, rather than the details of the scene. Then in 1909, he had his first show and began to experiment with portraiture (especially self-portraits in what, in the 1960s would be called his “hippie” phase).

Then after recognizing that paints on canvas could never truly express the colors in nature, he fell under the influence of the fauvist and symbolist movements. His style evolved to large sweeps of pure, bright, contrasting colors. By 1910, he began reading about (but had not actually seen) cubism. He began to paint flat figures in contrasting colors with a focus on angular forms—moving more and more toward abstraction and the use of subdued, gray palettes.

By 1913, his work had become more and more abstract and he again expanded his palette, but this time toward softer colors. And, as a forerunner to his future work, he began to organize his work around and in conjunction with grids. By the end of the 1910s, he had begun to create his first truly abstract works based on colored grids. By the mid-1920s he had, contrary to the urging of his long-time patron, shunned figuration to focus exclusively on abstraction—especially grid-based patterns based on strong, pronounced black lines and vivid, contrasting primary colors—the types of works for which he is now best known.