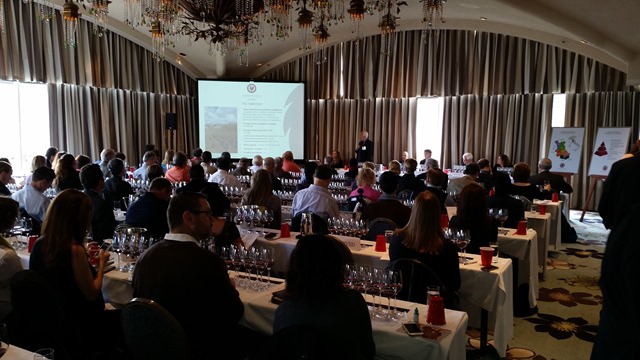 Consorzio del Vino Chianti Classico (the Chianti Classico Consortium in English) has been busy over the last few years, having sponsored a comprehensive 16-year study (1987 through 2003) of the entire Chianti Classico process. They examined everything from the various grapes and clones from which the wines are made, the root stocks which are planted, the soil and microclimatic conditions in which they are grown, through every element of the production process, from the yeasts that trigger the fermentation through the barrel and bottle aging practices. The study resulted in an exhaustive compilation of best practices for creating the absolute best wines possible and then worked with growers and winemakers to tailor these practices to their own unique needs and styles.

One of the most critical components of the study was on the variations, advantages and disadvantages among different clones (especially the Sangiovese clones which constitute a minimum of 80 percent of all Chianti Classico wines). The Consortium then worked with growers and winemakers to adopt these clones which are now used in well over half of the region’s vineyards.

The identified clones, combined with other best practices are intended to improve the quality as well as protect and steadily enhance the Chianti Classico brand. They are also being used to help justify the creation of a new, premium-level Chianti Classico designation that will, as some wineries hope, improve the image of their wines and help them more effectively compete with higher perceived quality Italian wines such as Barolo, Amerone and Brunello.

The consortium is now going to great efforts to promote this wine in the United States—by far the largest market for Chianti Classico wines (Surprising, at least to us, the U.S. accounts for 31 percent of all Chianti Classico sales, well above those of the next three countries: Germany at 12 percent, Canada at 10 percent and even Italy itself at 18 percent.) To introduce these premium wines as well as to find distributors and retailers to carry them, they hosted trade seminars and tastings trade seminars and tastings in the two largest, most influential U.S. markets, first in New York and in May 2015, in San Francisco

We attended the San Francisco event at the Fairmont Hotel in which we learned about the Consortium’s efforts and the new Gran Selezione designation as well as had a chance to taste these wines, and compare them with the Chianti Classicos and Riservas from 30 different producers.

The event started with a well-attended seminar which explained the Consortium’s initiative and the new classification, showed how it fits into the broader Chianti designations and then guided us through a comparative tasting of eight Gran Selezione wines from different regions and producers.

To understand the new designation, one must understand the entire Chianti Classico classification system. The Chianti region was originally designated by the Grand Duke of Tuscany in 1716 as a specific section of land between Florence and Sienna and then, in the early 20th century, more than doubled in size to meet growing demand for its wines. In 1932 this expanded Chianti region was, as shown in the first two maps, divided into seven zones (Colli Senesi, Montalbano, Rùfina, etc.), of which the original 1716 area was designated as “Classico”. This Classico region has since been sub-divided into communes, generally named after the region’s primary village (Greve in Chianti, Radda in Chianti, etc.). 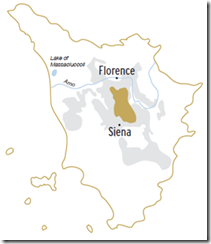 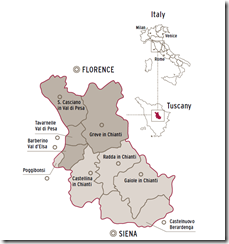 These requirements and characteristics, as listed from highest to lowest level are:

The seminar tasting of eight Gran Selezione wines did indeed demonstrated their complexity, depth of color and flavor and ageability. It also showed that the stricter requirements still provided vintners with opportunities to differentiate their wines in accordance with their specific terroir and their own unique visions.

The second part of the event, a tasting, organized each of the 30 participating producers by village to allow attendees to compare wines from within and among the different Chianti Classico sub-regions. Just as importantly, most wineries tasted at least three of their wines: a Chianti Classico Annata, a Riserva and a Gran Selezione. Although these wines were from different vintages (due primarily to differing aging requirements), this provided an opportunity to understand each producer’s style and to get a pretty good feel of the differences attributable to classification.

Not surprisingly, we had a general preference for Riservas and especially the Gran Seleziones. These preferences, of course, must be weighed against the higher prices of these wines (although Gran Selezione prices do vary greatly, generally from about $40 to more than $200 a bottle). We also found some producers, including  Castello di Gabbianao, Il Molino di Grace, Isole e Olena, Castello La Leccia and Marchesi Antinori, whose wines we enjoyed across the board, from Annata to Gran Selezione. And we also had our own general preferences among sub-regions. Although we enjoyed some of the wines from each of the locales, our personal tastes tended to lean toward wines from the western locales: Casciano in Val di Pesa, Barbarino Val d’Elsaand Catellina in Chianti.

In addition to the education and wine, we also got to taste some wonderful cured meats and an incredible Parmigiano Reggiano at the event. After all, one can only truly enjoy great wine, in conjunction with great food.