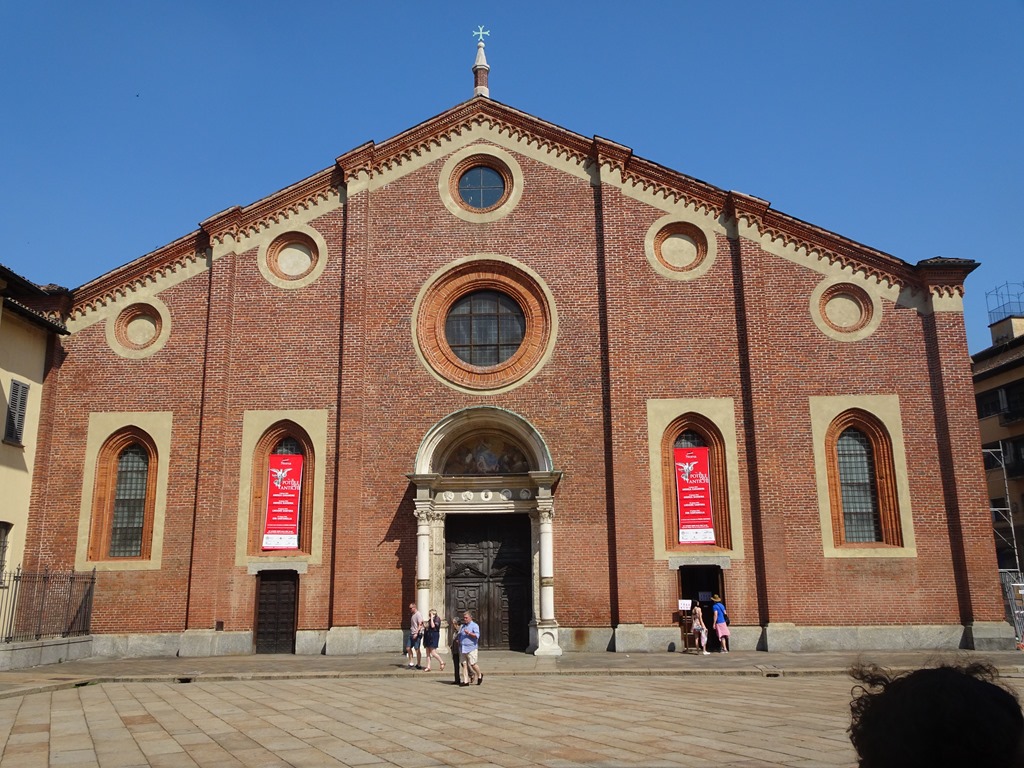 Milan Italy is known for fashion, for opera (especially in the form of the La Scala opera theater) and as the business center of Europe. It is not especially regarded for its beauty, its cuisine or as a tourist destination. It is, however, home to at least two truly world-class attractions (in addition to performances at La Scala) that we wanted to see These are:

So important are these, and so long are the lines to see The Last Supper and to reach the Duomo’s Terrace, that we felt they were more than worth a guided tour that would skip the lines.

The fresco is located at Chiesa di Santa Maria della Grazie, a 15th-century, Renaissance-style Dominican church that used to be part of a monastery. This monastery, along with much of the church and part of the refractory in which the Last Supper is located, were destroyed in WWII. DaVinci’s The Last Supper and Montorfano’s Crucifixion, a fresco on the opposite wall of the refractory, were, miraculously, saved from destruction by protective scaffolding and sandbags. 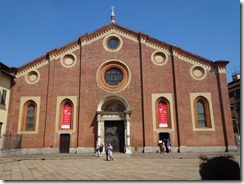 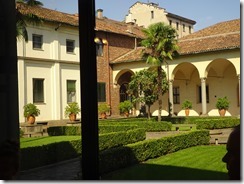 Leonardo’s iconic fresco, however, was not always so lucky. While DaVinci was certainly an immensely talented artist, fresco, according to our guide, was not his favorite, or most convivial media. First, fresco demands fast work, since it has to be painted while the underlying, fast-drying plaster is still wet. Second, it permits no changes after the initial application. Leonardo violated both of these rules throughout his life. As a result, his masterwork had begun to crumble a mere 20 years after it was created. In fact, it got so bad that 200 years later, the work was virtually disregarded. The monks, in fact, cut a door into the wall, destroying the feet of Christ, whose feet, according to contemporaneous copies of his work, overlapped, just as they did on the cross.

If that weren’t bad enough, Napoleon’s troops used the refractory as a horse stable in which some apparently played a game in which they threw stones at the fresco in an attempt to hit Judas. Moreover, early attempts at restoration entailed painting over existing work, sometimes changing the colors and nature of the work. And this does not even begin to account for the damage done by smoke from the refractory’s kitchen and candles, from years of great temperature variations, from smog and other indignities.

Somehow, despite all this, the work survives and has been restored to what is thought to be a reasonable facsimile of the original. However “original” the current version may or may not be, it is certainly impressive. 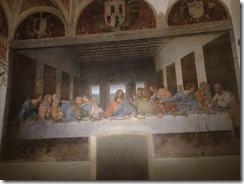 We visited the church’s Cenacolo Refractory for a chance to marvel at the incredible work: incredible not just for the expression of shock at the instant of learning of the betrayal or even at the way in which the composition actually appears to be part of, rather than just painted onto a wall of the room; but also at how the five-plus century old fresco, that was so frequently and severely imperiled by nature, smog and bombs could have been restored to such as pristine condition.

However it was restored, the result is magical, even more so than as it most have been when it revolutionized the ways in which subsequent artists portrayed this common scene. As shown by our guide, most previous representations showed Jesus and the apostles sitting still, with little or no expression. Moreover, they painted the scene from after when the apostles learned that it was Judas who would portray Christ, and painted him outside the rest of the group. 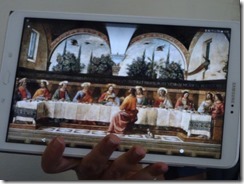 DaVinci turned this perspective on its head by choosing to portray the precise moment after Jesus told his disciples “one of you will betray me.” That allowed him to focus on the shock and the passions the revelations aroused and the looming question of which one—as Peter asked the amazingly androgynous John to ask. Unlike with previous representations, he portrayed each of their emotions in their expressions, their postures and their hand gestures and, also unlike previous paintings, all of his characters were in motion. They are also aligned in groups of three (a reference to the Holy Trinity?) and all were separated from and moving away from Jesus (representing his isolation on the cross?) There is also ongoing speculation as to how Peter was holding the infamous knife and why, whether DaVinci intended to represent John as a young boy or as a woman and why Judas’ skin is darker than the others (or was this a decision by a future conservator who was trying to repair the damage done by Napoleon’s soldier’s stones?) 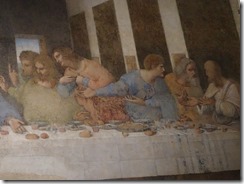 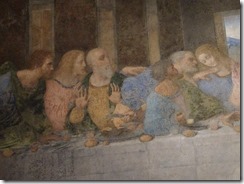 Also unlike previous, and future painters of the era, DaVinci was also a scientist. He experimented with a new “dry” fresco technique to allow him to paint more slowly and deliberately, to better distinguish between light and dark and to blends colors into more realistic tones. But just as not all experiments yield the best results, his approach did not hold up as well as tested “wet fresco” techniques. And, speaking of experiments, he was also among the first to attempt such large-scale use of perspective, which created a three-dimensionality that is absent from (or at least as convincing in) other works. It almost lifts the painting off the wall and engages the viewer in the scene and its emotional fervor.

A revelatory painting and a fascinating portrayal of a masterpiece, its history, its meaning and of the man who created it.

We thought our Last Supper tickets included a guided tour of the Duomo as well as the Last Supper. It ended up including only a ticket that allowed us to take the elevator to the cathedral’s roof. So, as we discovered, we were on our own to explore the Gothic temple.

The first thing that catches your eye is the immense expanse of white marble that rises so majestically from the huge piazza. It is, after all, the fifth largest cathedral in the world, measuring more than 500 feet in length, 300 in width and almost 350 feet in height. It is entered through beautiful cast bronze doors. 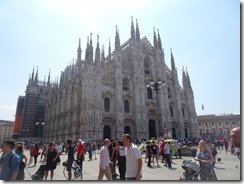 The second is the festival of spires pinnacles, gables, statues and gargoyles that leap from its surface. Then you understand that while construction of the cathedral, which began in 1386, took almost 500 years (until 1809) before the façade was actually completed—and that required an order from Napoleon. Moreover, the Duomo, which has suffered centuries of deterioration from a combination of settling, smog and pigeon waste, requires almost as much restoration as The Last Supper. 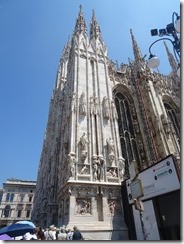 Although the exterior is impressive enough, one can’t fully appreciate the scale of this structure until you enter its cavernous confines. The huge expanse, which can accommodate up to 40,000 people, is all supported by 52 huge pillars, each plain up to their carved capitals. Then there are the acres of stained glass, the mosaic floors and the dozens of sculptures (including that of St. Bartholomew, who was skinned alive for preaching his believes). While the cathedral contains crypts of a number of its cardinals, the spot of honor belongs to St. Carlos, with his elaborate basement crypt.

Then, for the piece de resistance, we took the elevator to the roof, where we visited the structure’s 135 pinnacles and 2,245 sculptures in person—and looked much further up to the peak of its 356-foot spire—topped by the roughly 18-foot tall, 2 million-pound, copper-coated (over a stainless steel infrastructure) Madonna of the Duomo (a copy of which is displayed at eye-level in the transept). From here, one can see the repeating patterns of the ornate supporting arches, look its gargoyles in the face and notice how each sculpture and design element, which look identical from the street, are actually unique. 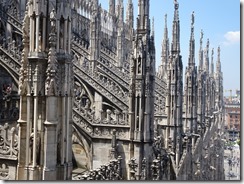 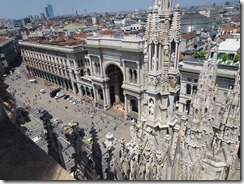 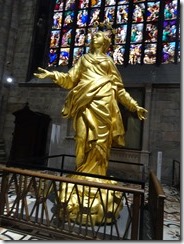 The Cathedral’s museum, which is located across the street, amazes in different ways. It is filled with all types of ecclesiastical treasures, from large golden crucifixes, intricately-carved ivory bible covers, paintings, challises, wood carvings, tapestries, candlesticks and all types of sculptures, architectural elements and stained glass from the cathedral. Then there is a roughly 22-foot, carved wooden, scale replica of the cathedral and a lovely chapel that was built for and used by the city’s 14th-century ruling family. 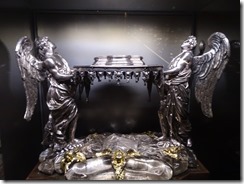