Monroe Wisconsin is a pretty southern city that is home to the National Historic Cheesemaking Center. We made a fast stop but very interesting stop as we drove through the area.

The center is something of a cheese museum that includes the historic, one-room, 19th-century Imobersteg Cheese Factory. The tour begins with an introductory movie explaining the history of Swiss immigrants, and to a lesser extent, German and Italian immigrants, who raised cows and made cheese in a landscape reminiscent of their home countries. It explained the entire cheesemaking process from inspecting and pasteurizing the milk, the heating and adding of starter cultures and rennin to the milk, through the cheesemakers. stirring, cutting of the curds and the pressing of curds into rounds which are then cured and aged in chilled cellars. It briefly explained the different processes and rennin used to produce different types of cheeses (of which there are more than 600 in Wisconsin alone), the grading system and the state’s program for ensuring quality and for advancing the trade, including through its’ Master Cheesemaking training and testing program for highly experienced cheesemakers.

Exhibits include a wide range of milking tools, production equipment including holding tanks, copper (now stainless style) heating vats, cheese rounds, measuring and testing instruments, innovations such as milk coolers to allow cheese to be made when convenient, rather than immediately after the cows are milked. Other displays included an interesting overview of the discovery of cheese, from when an unidentified Arab carried milk in a bag made from the stomach of a baby goat. The stomach, apparently, retained small amounts of the stomach’s rennin, which separated the milk into curd (the solids) and whey (the liquid).

The tour continues in the original, refurbished Imobersteg Cheese Factory. After another brief movie, we learned about the layout of the building, its components and how a system of ropes, pulleys, counterweights and rotating posts reduced the amount of labor required to lift the milk, remove the 50 pounds of curd from the 450 pounds of whey in the heating kettle and the moving of the curd to the round and the press, which was operated via a counterweight. We were, unfortunately, two weeks early for the once-per-year demonstration of the entire process in the factory. 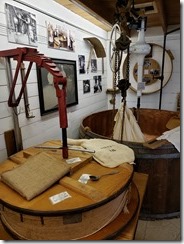 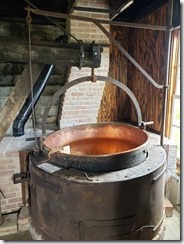 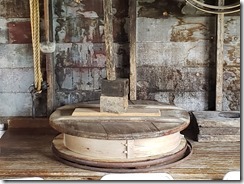 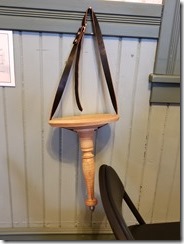 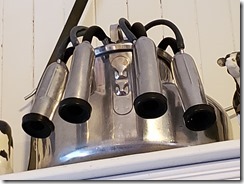 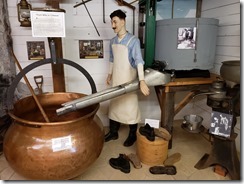 If you like cheese, or just want to know more about how cheese was and is currently made, this is a fascinating stop. Unfortunately, it didn’t have any cheese samples. Oh well.