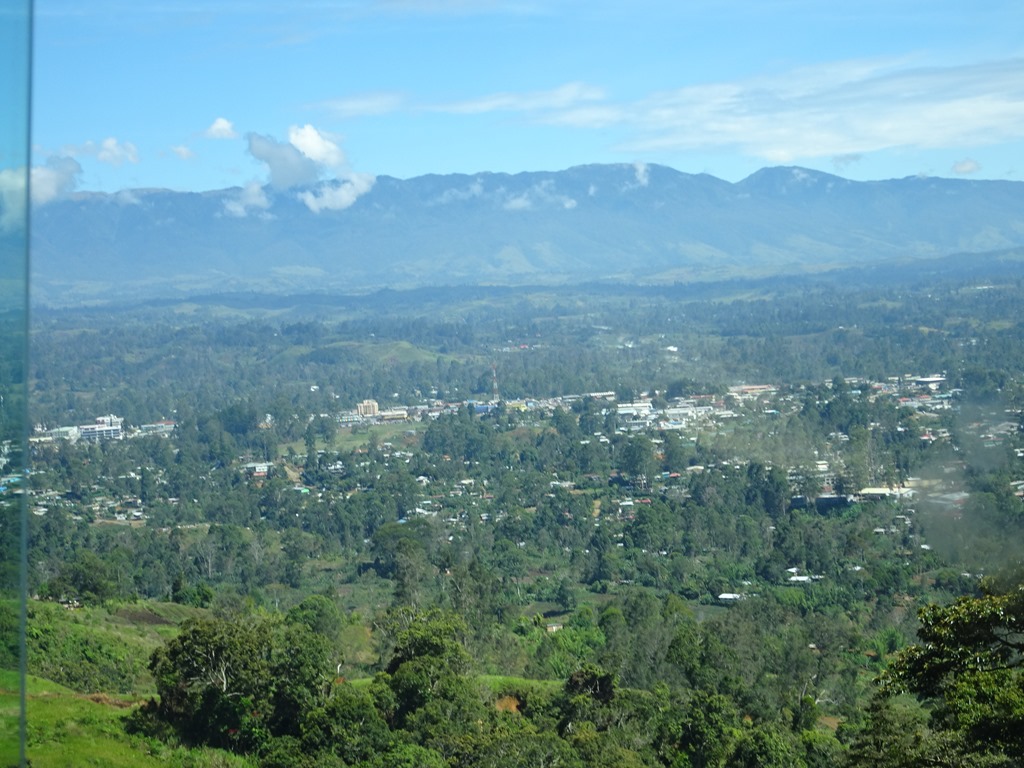 Our next destination in Papua New Guinea was the town of Mount Hagen, the third largest town in the country (80,000 people) and the capital of the Highlands.

After an hour on the speedboat ride up the Septik River to the airsrip, a 45 minute flight and another 45 minute drive over the roughest road of our trip (at least so far) 7,100 feet up a mountain, we arrived at the Rondon Ridge Resort, which overlooks the valley, the town, Mt. Hagen and the other mountains that surround the valley. 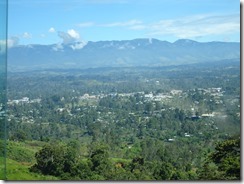 The rugged, remote, mountainous Western Highlands was the center of German colonial efforts in the late 19th and early 20th centuries. When responsibility for administering the region was given to Australia after WW II, they immediately (in 1946) discovered gold. It was only then that the region was fully explored and it discovered to be home to far more people than originally anticipated. The discovery brought prospectors, guns, planes and many other things that forever changed life in this region of the country. Just as importantly, missionaries and merchants brought more and more valuable shell currency into the region, using it for trade and to pay workers. This new wealth overwhelmed the villages’ traditionally shell-rich families and led to a reversal of the tribes’ social and economic order.

Not incidentally, the gold strike generated enough revenue to support the country for decades.

Mount Hagen continues to an important mining center (especially for gold and copper). It is also has a long and rich agricultural history: Very long. The region had been settled for more than 20,000 years (compared with 40,000 for the coastal regions) and is thought to have been continuously farmed for more than 9,000 years, making it the oldest such region on earth! This tradition continues. It remains the country’s richest agricultural region, known primarily for its Arabic coffees (which were originally brought by German missionaries and farmers). It is also one of the nation’s primary sources for staples such as sweet potatoes, potatoes and many other vegetables. This led to the creation of a huge produce market that ships goods through the entire country. It is also home to the annual Mount Hagen Cultural Show.

Our very brief (less than 24 hour) visit was devoted primarily to a nature and birding walks. The nature walk was lovely; through a richly diverse tropical forest that combined hardwoods, ferns and mosses that were accessible by virtue of an extensive and difficult to build trail. Steps were carved into clay hillsides and fronted by logs to reduce the chances of falls. Low-lying, muddy sections were covered with logs laid side-by-side in the form of 19th-century corduroy roads.

Although the area is reportedly home to 185 species of birds, we, with the assistance of our guide and three of the more avid birders in our groups, saw two Birds of Paradise at Mount Hagen, for a total of five. This compares with the record of 14 for one of the group members who’s mission was to see as many birds as possible.

But while we were clearly deficient in finding and identifying birds, our guide did show us and explained the construction and use of a Bower bird display area—this one by a Yellow-breasted Bower bird, which is a member of the Bird of Paradise family.

The display area, which typically takes several months to construct, begins with a roughly three-foot diameter circle around a small tree. The circle is cleared of all debris, which is pushed to the outer edge of the circle, thereby creating a lip that clearly defined the site. The bird then collects thousands of twigs and leaves to build a loosely-packed structure that is separate from, but supported by the tree. Although the partially build one that we saw was only a couple feet high, some can reach up to five feet tall. 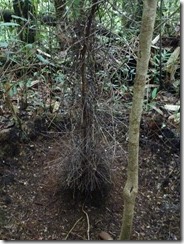 Once the structure is built, the bird decorates it with flowers, feathers and moss and balls of dung that are hung like tinsel and bulbs on a Christmas tree. Once and a female stops by to admire the structure, the male dances around the nest in a formal display of his beauty and his prowess. If she is suitably impressed, they go to a more secluded spot to mate and for her to build a nest. She lays between one and three eggs which they both incubate and when hatched, feed.

The demonstration area, meanwhile, remains, but falls into a state of disrepair until the male is ready to mate again. He then repairs, expands and redecorates the area and the process begins again. But even when an area is abandoned, other males will create their own place from scratch rather than pick up where the other left off.  While each structure will have its own individual characteristics, all of those built by the same species will be generally similar. Those built by other species, like the MacGregor Bower bird, however, will be different. Disconcertingly, display areas built by either species around a populated area, tend to be built and decorated with as much human rubbish as with natural materials.

But let’s move from birds to fauna. The  new and very comfortable lodge has several of its own gardens. For example, it has lovely flower gardens surrounding the premises and, a few hundred meters away, a nicely maintained patch of forest that contains wildflowers and of greatest interest, orchids. And, it had its own tree kangaroo. 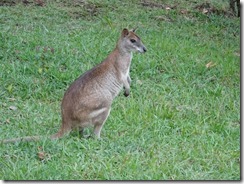 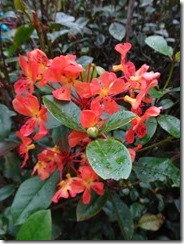 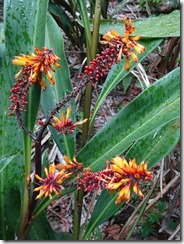 The lovely lodge also has a gallery with high-quality traditional crafts and a conference center with a display of historic photos from the early-to-mid-20th century. We can’t resist posting one of the iconic pictures of a native woman suckling a pig on one breast and a baby on the other (remember, pigs are very important and valuable). 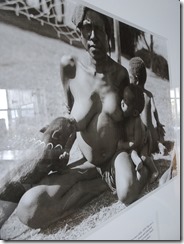 Further away from the main site, beyond the helicopter pad and surrounded by forest is a lovely, contemporary-design home that belongs to the Managing Director of Trans Nuigini, the Australian-owned company that owns the airline on which we flew, the resorts at which we stayed (plus a number of others) and the tour company that organized our trip. No, we weren’t invited to stay in their home, but our regular hotel room was still the most luxurious accommodation we had on our trip. While we only had one night here, we enjoyed it very much. 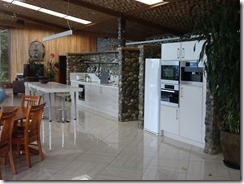 But now it is time to move onto the piece de resistance and the reason we came to  Papua New Guinea….the goreka sing-sing festival