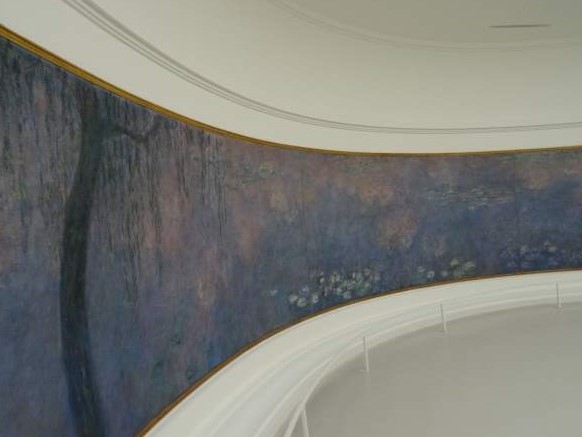 L’Orangerie is a small gem of a museum in Paris’ Tuileries. It was originally built as a winter shelter for the orange trees destined for the Tuileries Gardens. It then became an annex to the overcrowded Musée du Luxembourg. We stop here every time we are in Paris. It is one of our all-time favorite museums. Overall, L’Orangerie has an extraordinary collection and deserves to be much more popular than it is.

Two large, oval rooms that are covered with four huge murals of Monet’s lily water paintings are the highlight of the museum.

Monet donated both series of Nymphéas panels to the French government to commemorate the end of WWI. He designed L’Orangerie’s oval rooms and lighting for their display. Each room contains four panels that effectively wrap around each room to provide 360-degree experiences: It provides a full-immersion experience that is almost like visiting the Giverney gardens in person (see our post on our visit to Giverney).

The History of Modern Art­­–In One Family’s Collection

L’Orangerie, however, is much more than Monet’s water lilies. The museum houses the extraordinary Guillaume Apollinaire/Walter collection. On one of our trips, an exhibition contained an overview of Apollinaire’s role in encouraging and assisting in the creation of four of the most important artistic movements of the late 19th and early 20th centuries: Impressionism, Neo-Impressionism, Cubism, and Fauvism.

The exhibit provided an incredible overview of emblematic works from each of these eras (as well as a display of his office, and models of his rooms). The exhibit includes work by virtually all the most famous and influential artists of the period, plus those of some who are much less known. Among the masters are:

Renoir worked with Monet to develop plein-air (outdoor) painting and experimented with the use of broken brushwork to open up his painting. This collection includes two dozen paintings through all stages of the artist’s career; from portraits to landscapes to still-lifes, including some of his most recognized work. Guillaume owned at least 25 Renoir paintings. Some of them are displayed across two galleries that look at his evolution as both a landscape and portrait painter.

Cezanne crosses all boundaries. He began working with Picasso, then with early Impressionists. He moved almost to sketching where he served as a precursor of much modern painting by emphasizing geometric shapes, structures, and volume. Citing his contributions, Picasso called him “the father of all of us”. He is known as “the father of modern art”.

Matisse began as a Neo-Impressionist but in the early 20th century he “liberated color” by creating Fauvism (which takes inspiration from nature and builds in a concentration of lines and color). Later in life, he evolved to adopt more African, Moorish, and Moroccan influences.  As seen in his Odalisque series, he eventually began incorporating some classical elements into his work.

While Picasso was a friend and co-lover of African art, Guillaume was not his dealer. The exhibit’s Picasso paintings were therefore limited to some in the artist’s Neoclassical and Analytic Cubist periods. Guillaume was the first to stage a comparative show of Picasso and Matisse.

Derain constantly evolved his style from Fauvism, to Figurative, to Classical in painting everything from portraits to landscapes to still-lifes.

Modigliani began working with Brancusi as a modernist structure. In his short, scandal-laced career (and life), he moved into figurative drawings of people with simplified forms.

L’Orangerie also displays other talented artists who may not be as well known.

Maurice Utrillo was a mentally unstable alcoholic who focused on urban scenes (especially around his native Montmartre). His work culminated in his “White Period” where he applied heavy layers of white impasto with a palette knife.

On another visit, L’Orangerie had an exhibition based on the collection of art critic and gallery director Felix Feneon. Feneon admired the scientific basis, the technical rigor, and the sensual colors of the Pointillists (a technique of painting in which small, distinct dots of color are applied in patterns to form an image). He championed the work of a number of Neo-Impressionists. He organized major shows of the works of Seurat and Signac, and the first public exhibitions of Matisse. In 1912, organized a show of the highly controversial Italian Futurists—a group whose work was so controversial that a fistfight broke out at its opening.