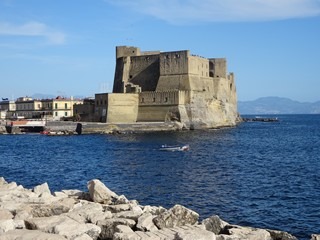 Naples (or more properly, Napoli) is the home of pizza and the place in which the quintessential Margherita pizza was created (named after the Queen). Although the city is congested, graffiti-scarred and somewhat dirty, it does have more than pizza going for it.

Our independent exploration of the city began along the southern shoreline, where the pedestrian-only roadway passed two of the city’s fortresses (Castel dell’Ovo and Castel Nouvo), a small beach, amusement park and pleasure boat harbor and a long line of large, outdoor seafood restaurants. A short distance after the road opens to cars, a new line begins: this of passenger ferry, followed by cargo ship terminals. 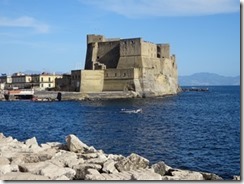 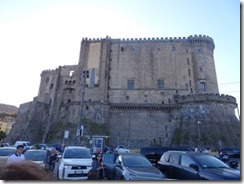 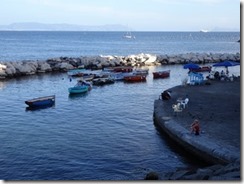 The pedestrian end of the street led to a roadside park and the city’s upscale Chiaia district, with its residences, offices, hotels, luxury shops and of course, restaurants and clubs—the later ofwhich attract huge weekend crowds that flow out into the street. It also housed our hotel, our favorite Neopolitan pizza restaurant (Mattozzi, as discussed below) and our favorite gourmet store. 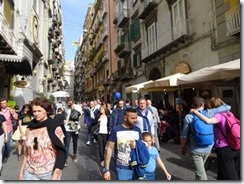 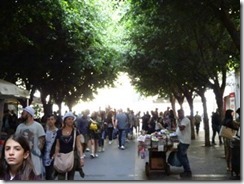 Via Toledo, the city’s primary North-South axis, leads to two of the city’s largest, most popular piazzas, Reale and Dante, both of which were sites of large festivals on the holiday we were in town. Among Via Toledo areas primary sites include:

The Historic Walking Tour from FreeWalkingTourNapoli, was one of the few disappointing free walking tours on which we have been. The guide found it difficult to engage with individuals and spoke English with an accent that was extremely difficult to understand, especially in the noisy, jam-packed streets of Naples’ historic district. Although we gave up half way through the tour, we did see some interesting sites and gained some important perspective on Naples. Among the highlights: 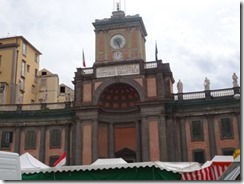 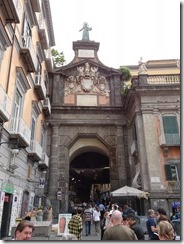 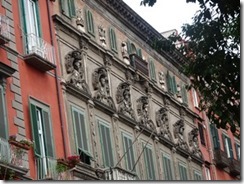 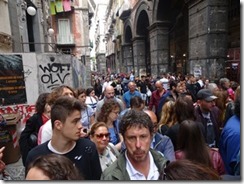 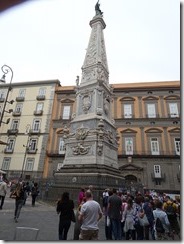 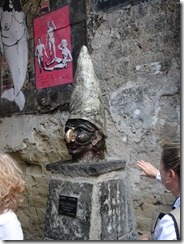 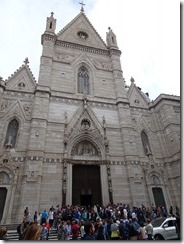 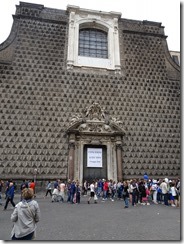 We also had a couple of disappointments, in addition to our guide, within the historic district. While some of the churches that we would have liked to visit were closed, our greatest disappointment was in not being able to get into one that was open:

Palazzo Alabardieri. The hotel is by the port area and is about a 30 minute walk to the historic section. While it was fairly expensive and is rated 4 stars, it seemed to be lacking in recent TLC. For example, in our room, the shower drain could not drain the water fast enough and the shower continually threatened to overflow onto the bathroom floor (it did have a nice showerhead). The screws holding the shelving in the bathroom were loose and the shelves were all tilted down. We couldn’t get the safe to work but we never asked for help with it. However, the room was comfortable, plugs by the bed and the AC worked well. One other strange thing is that when the person at the front desk was working at their desk, you couldn’t see them if they were sitting down