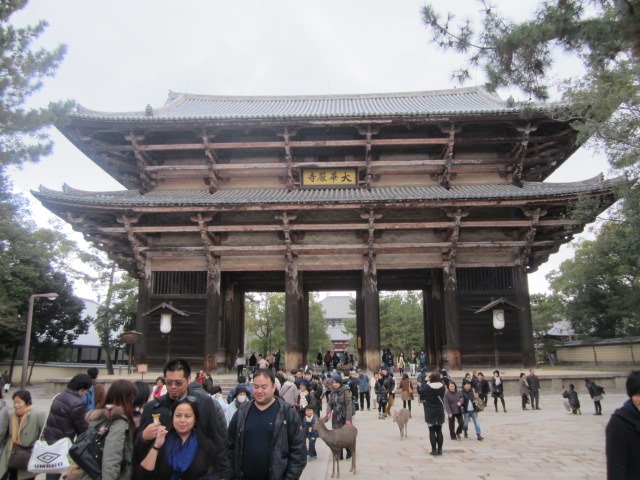 Nara, which had its beginnings as the end of the Silk Road, became Japan’s first real capital in 710 AD. Since the capital moved to Kyoto prior to an era of conflict, it escaped many of the ravages of war, and was, therefore, able to preserve many of its temples and and shrines. While the city has two major concentrations of historical structures (near the city center and southwest of the city, we had only a day to spend there.

After a morning train from Osaka, we headed straight to Nara-Koen Park.

Nara-Koen Park is the home of some of the city’s most important temples and shrines. It is also home to about 1,200 deer which had been thought to be messengers from the gods and are now protected as National Treasures: perpetually hungry treasures that are on continual quests for food handouts. And, as we discovered, when they can’t get the biscuits that tourists buy to feed them, they will content themselves with maps they wrestle out of your hand and refuse (at least without a fight) to return. When Tom got his back, half of it had been eaten. Wish I had a picture of Tom wrestling with a deer for his map back! More historically, the park is also home to one of the city’s most important temples, and one of its most important shrines:

Todai-ji Temple is entered through its main gate, a grand, 18-pillar structure that was built in 1199. The primary building, the Hall of the Great Buddha, is a 1706 reconstruction of the original building that dates from 746. The current building, which is only two-third the size of the original, is massive–currently the largest wooden building in the world. It is protected by two 13th-century guardians that are generally deemed to be the best wooden sculptures in the entire country. The interior of the temple, which still conveys some of the original building’s grandeur, is home to the Great Buddha, a 55 foot tall, 437 ton bronze casting that is covered in almost 300 pounds of gold. Other buildings include the Treasure Repository (which no longer contains any treasures), a large ordination hall and a couple of other halls including one that is the oldest in the complex. The large, impressive Nigatsu-do contains two buildings. Although neither can be entered, one does offer a panoramic view of the city. 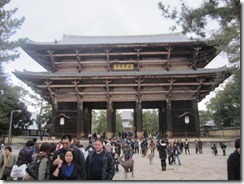 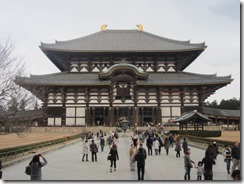 Further south in the park is a major Shinto shrine:

Kasuga Taisha Shrine, which we managed to hit on a day in which worshipers from all over Kansai Province visit. It was packed and we had to stand in a long line to get even a quick glance inside the main building. But while we didn’t see much of the temple itself, the path leading to it is lined with row upon row of lovely stone lanterns. We were, however, disappointed with the shrine’s Treasure Hall, which contained only a small exhibit on Japanese swords and armor. 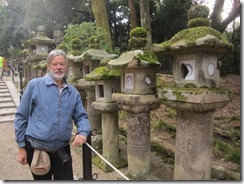 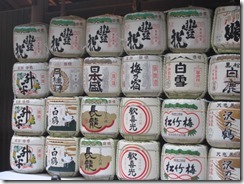 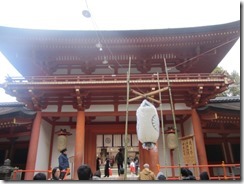 Closer to downtown is another important temple:

Kofuku-Ji Temple was the temple of the Fujiwara family, which ruled Japan for 500 years. While it originally comprised 175 buildings. Only twelve remain. The most important are two great pagodas. The five-story structure, built in 1426 as a copy of an original built 700 years before, is the second tallest pagoda in the country. The three-story structure was built in 1114. The temple’s Treasure House’ of which our Nara guide (see below) gave us a tour, holds a number of sculptures that were created for previous versions of the temple–many in service to the Healing Buddha housed in the Temple’s East Main Hall) and saved from the fires that destroyed them. Among the most impressive were those of the 11th century Twelve Divine Generals (who were charged with protecting each of the Healing Buddha’s vows, the Buddha’s two attendants, the six remaining of the Original Ten Disciples. Other highlights are a lovely 694 AD cast bronze Buddha head. The 12th-century "1,000 Arm" Kannon and a six-armed "Ashura" that is one of the most admired in the country. 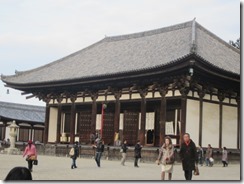 Nara National Museum, has two wings, the Western that focuses on the city’s archeological discoveries and the Eastern on sculptures. While the Western Wing had some nice examples of restorations, the Eastern Wing is the highlight. The tunnel entry had an an interesting exhibit that demonstrated the steps involved in making Japanese wooden statues. The museum itself showed a wide range of wood- and stone-carved sculptures and masks and bronze statues and vessels. Pieces from the 9th through 18th centuries.

Nara, however, has more of historical interest than temples.

Old Town Nara is build around a maze of alleyways that contain many historic ruins, more modest temples and shrines, gardens and still occupied "machiya" (merchant townhouses which blend commercial and residential uses in the same building). We sought local help in understanding the history and culture of this section of this historical area by enlisting the help of a local guide from Nara Walk (www.narawalk.com).

Old is a relative term. Although this area of the central city had ancient beginnings, its current structures are relatively new. Most of the oldest are from the late Edo period (up until about the 1850s) and the Meiji period (1859 to 1910). And we learned the primary means of telling the difference between them (Meiji homes have more space and windows between the first and second-floor roofs. Edi homes have only about a foot, with no windows.)

Although these styles are represented in homes and a few commercial buildings, the most interesting are the machiya. From the outside (the only way we could see them) these buildings have flaps on their front walls: one that goes down to serve as a shelf on which to display goods and one on the top which can be lifted up for the proprietor to engage with customers. Our guide told us (and showed us pictures) that the homes originally had bamboo roofs and dirt floors (to minimize prospects of fires). When they had second floors, they were accessible primarily by ladders. 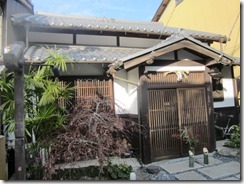 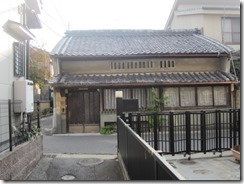 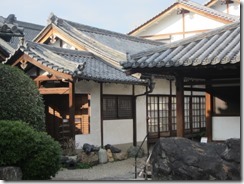 We also visited a number of non-residential historic sites. These included: 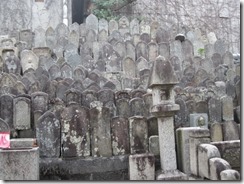 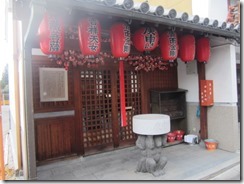 We had time for just one lunch:

Kasuga. A very pretty restaurant at which we shared two multi-course meals (and sake). One was a mini-kaiseki, a roughly eight dish meal that included a small, artistically arranged sashimi plate, a type of simmered custard, Broiled salmon in sweetened vinegar, pickled vegetable, miso soup, rice with dried baby shrimp and sherbet. The second meal included mackerel sushi wrapped in persimmon leaves, green tea noodles and shrimp tempura in broth, sesame tofu and, as the main dish, chicken, tofu skin, green onions and mushrooms that were cooked at the table in a soy milk base. Although we didn’t quite have a taste for all the dishes, the food was mostly good, presentations attractive and the service fast, courteous and attentive (given that the only way we could communicate was by pointing). How do they make food so pretty? 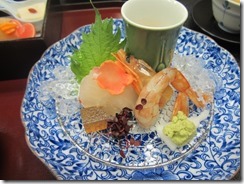 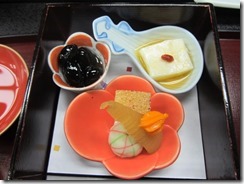 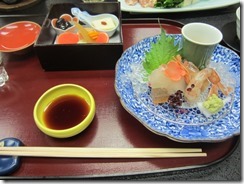 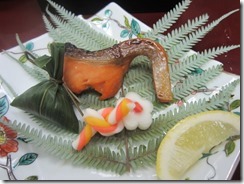